Fallout 76 must turn a series that’s been all about singe-player adventures in a post-nuclear apocalypse and creating something that’s fun in an online multiplayer scenario. Instead of aping mechanics from massively multiplayer online games like World of Warcraft or Destiny, Fallout 76 is taking a more sandbox approach. In a lot of ways, it feels like Fallout 4 … but with other people.

I played Fallout 76 (release date November 18 for PC, PlayStation 4, and Xbox One) for about three hours last week at a Bethesda Softworks event in West Virginia at a historic resort called The Greenbrier. I played in a group of four, which included two other journalists and a representative from Bethesda.

As someone who’s played through the modern Fallout games (Fallout 3, New Vegas, and Fallout 4), I found an experience that felt familiar. The addition of multiplayer does bring significant changes to the franchise’s RPG formula. Some of this is good, but other differences will sour Fallout fans that prefer a slower, more story-driven approach. The event’s location in West Virginia is not random. Fallout 76 takes place in West Virginia. And The Greenbrier, which also hosts a once-secret bunker that would have housed the legislative branch of the U.S. government if Washington D.C. was under a nuke attack, also plays a role.

West Virginia may not seem as interesting a setting as those in past Fallout games, like Washington D.C. and Las Vegas. But it’s a refreshing visual change. Instead of a complete wasteland, this West Virginia and its mountains and forests are often beautiful.

Aside from the location, story plays a factor in this. Fallout 76 takes place earlier than any other game in the series. You’re among some of the first humans to emerge from safety of your Vault, which explains why the world (though devastated) isn’t as totally ruined as we’ve seen it in before. 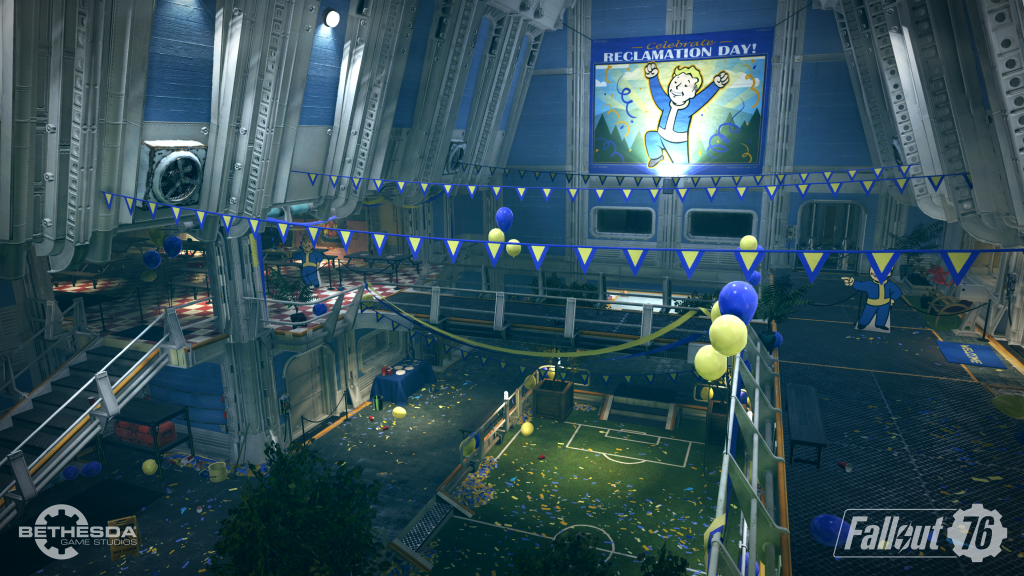 Above: You start the game in Vault 76.

That prequel status has bigger consequences. Since the players are among the first humans to go out into the nuked world, you won’t run into many (if any) nonplayer human characters. In past Fallout games, much of the narrative came from talking to humans and exploring their shanty towns. You’ll still have robots to talk with, but the lack of chatty humans makes Fallout 76 a lonely world.

Instead, it’s up to the players to populate the land. Once you emerge from the Vault (it’s a short sequence that is lighter on story and tutorials than what you see in, say, Fallout 3), you’ll have a C.A.M.P, an item that creates your own settlement. You set down a camp, and then you use your materials to build crafting stations, walls, turrets, and more.

The C.A.M.P. is similar to Fallout 4’s base-building mechanics. But this feature works much better when you have friends to help you create your new home. It’s also fun to stumble onto other player’s settlements and see their creativity.

Building is a key component for Fallout 76. As you wander the world, you’ll want to pick up ever little knickknack you find and then use a work station to turn them into scrap. You then use these parts to make new weapons, armor, and all of the building materials and other items you’ll want for your camp.

Your settlement is an important place for you and your team. You can fast-travel there for free, so it can be a safe haven from the dangers of the world. Scrapping and crafting is a huge part of Fallout 76, while the lack of nonplayer humans changes how we interact with the world. Fallout 76 still has a story, but it’s told through things like audio logs and old computer terminals. If you crave things like dialogue options, you’re going to miss them. 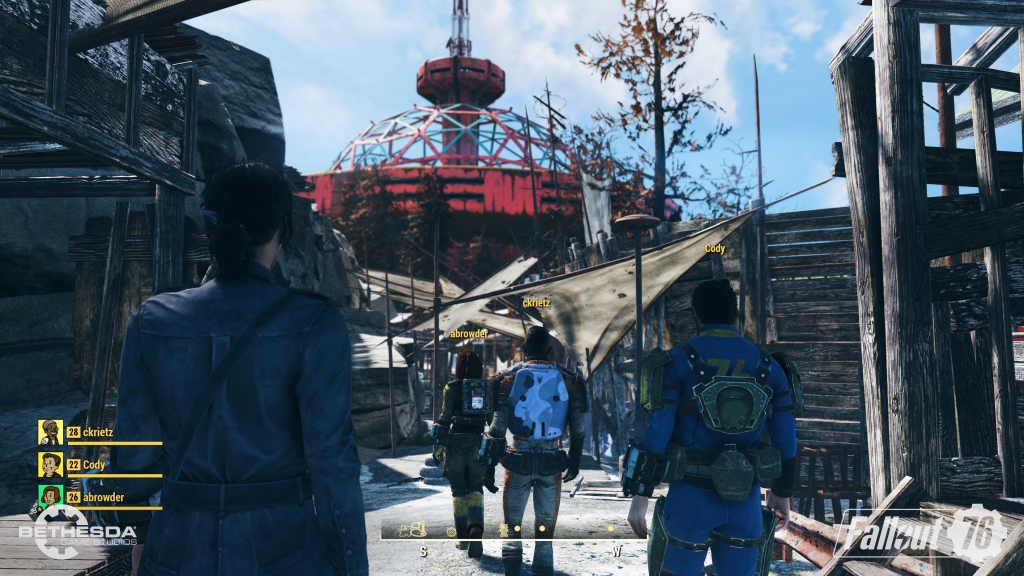 Above: Friends adventure together.

Aside from all the crafting, combat works much as it did in Fallout 4. You use melee or ranged weapons (aka guns) to fight irradiated giant bugs and super mutants. You can just aim and shoot as you would in any other first-person shooter, but you can also use VATS for auto-targeting.

In Fallout, VATS slows down time so you could target enemies and their body parts, giving you a probability of successfully landing your shot based on aspects such as your character’s ability and positioning. It helps give the combat a stats-based RPG feel despite its first-person perspective. It makes fighting more about strategy and less about aiming.

But you can’t have players slow down time in an online game, so Bethesda reworked VATS for Fallout 76. It still auto-targets enemies, but it now works in real time. In my experience, VATS is still useful in certain situations. If you’re running around with a shotgun, it can be easier to quickly press the VATS button so you hit a close enemy right in the chest. But I had a hard time trying to target specific body parts with VATS. I’d take too many hits by the time I cycled to the limb I wanted to shoot.

Fallout 76 also now has you fighting with friends. This can make it possible to take down enemies that would normally be beyond you. Friends can also use items to revive fallen allies. Otherwise, combat is still about running around and hitting things. You just have some buddies along for the ride.

It can feel cramp with all of those extra bodies. At one point in the demo, our group was running around a cave. Sometimes, we’d be in narrow passages that were just a bit wider than a single character. In these tight places, combat can feel a bit awkward, since your teammates will block you from the action. Thankfully, you can’t damage people in your own party. You can’t hurt your teammates, but you’re free to shoot other players. Fallout 76 has a creative way to handle in-world player-vs.-player combat. If you keep shooting someone who never attacks back but you kill them, it brands you as a Murderer. When you’re a Murderer, every player can see you on the map, but you can’t see any of them. It makes you an easy target.

It’s also difficult to kill someone who doesn’t shoot back. You deal less damage until they retaliate. This system dissuades players from griefing, the act of killing other players against their will just for fun. But if people do want to fight, they can. And if you kill someone, you get to keep all the scrap they’re carrying.

My team got into a fight with another group of players when we went to Fallout 76’s version of The Greenbrier (called Whitespring). Since we were all staying at the real place, we all wanted to see what it looked like in the game. I saw another player shooting at some kind of creature and decided to take aim at him while he was distracted. Soon, our two teams were exchanging fire. Then I accidentally hit one of the high-level robots that was patrolling the area. We were then in a brawl against other players and angry automatons.

It was complete chaos, but it was fun. We all ran around until the only reasonable strategy left was trying to flee the scene so we could teleport back to the safety of our camp. 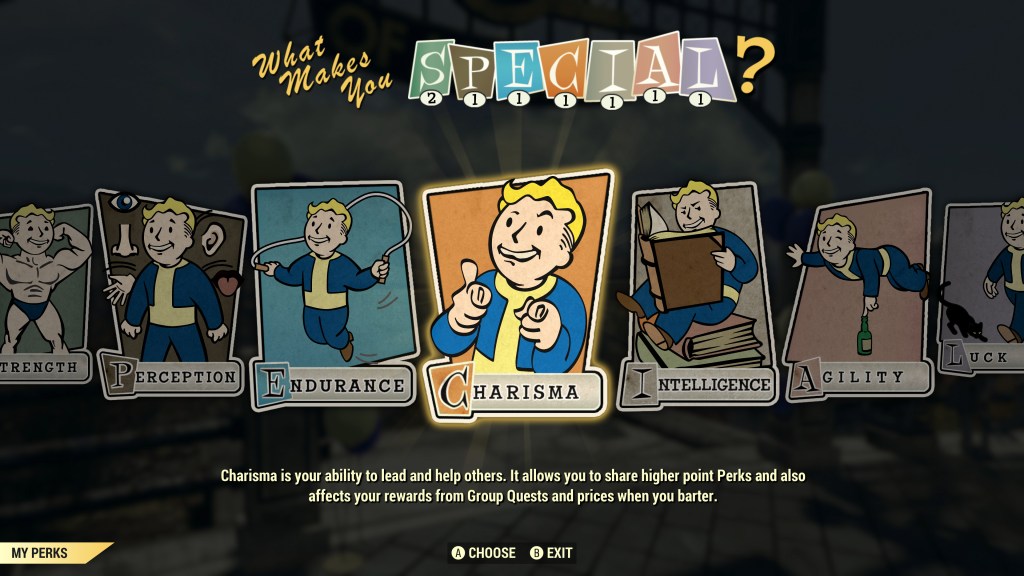 Progression also sees big changes, though it’s based in tradition. Like in past Fallout games, your stats and abilities are tied into the SPECIAL system. Each letter of SPECIAL corresponds to a different attribute: Strength, Perception, Endurance, Charisma, Intelligence, Agility, and Luck. When you level up, you get to increase one of your SPECIAL attributes. A higher rank of Perception makes it easier to hit people with VATS, while Strength can increase your melee damage and increase the amount of weight you can carry.

But when you level up, you can also pick a new Perk Card. Each of these corresponds to one of the SPECIAL attributes. These do simple things like increase the damage you do with certain weapons or more complex advantages like give you an audio clue when certain collectible items are nearby.

The higher your rating in a SPECIAL attribute, the more Perk Cards of that type you can equip. So, if you’re Luck is at level 3, you can equip three Luck Perks. You can also merge some duplicate perks to increase their level. A level 2 Perk Card takes up two slots instead of one.

It’s all a bit complicated, which is a welcome quality for a progression system. Sometimes when you level up, you earn a whole pack of Perk Cards, giving you an ever larger variety to pick from. The system encourages experimentation and can give you clear goals. If you have a bunch of really good Perception cards, you’ll want to focus on that attribute when you level up. 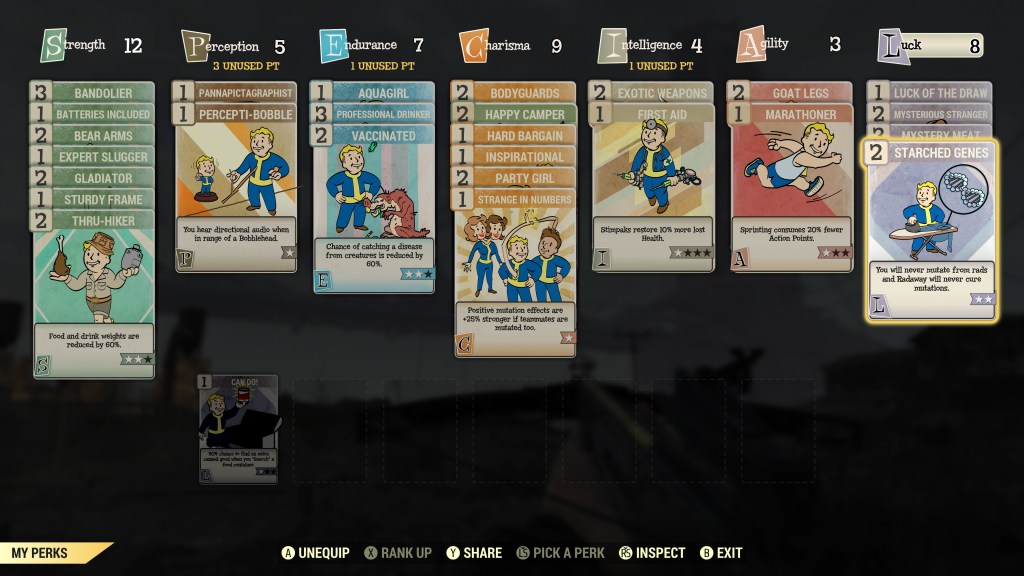 Three hours is not enough time to get a proper feel for a giant online game like Fallout 76. I’m still skeptical that the quality of the storytelling can match that of the single-player games without dialogue trees and nonplayer humans. I also worry that the new version of VATS puts too much of an emphasis on pure shooting skills.

But I had a good time with Fallout 76. West Virginia is a beautiful, tree-covered land to explore. Making camps with friends lets teams be creative together while making something that’s functional. The PVP system is smart and makes it possible for organic fighting to break out in the open world while making it difficult to kill people who don’t want to be a part of it.

How will these systems feel when you’ve been playing the game for over 300 hours? I have no idea, but that kind of longevity will be important if Fallout 76 wants to be a success. But it certainly kept me entertained during that short three-hour taste.