Bethesda has released a roadmap for content coming to Fallout 76 in 2019. It includes three waves, with the first starting on March 12 with the Wild Appalachia update. The second comes this summer, with the third coming this fall.

Fallout 76 came out November 14 for PlayStation 4, Xbox One, and PC. The online multiplayer role-playing game has had a rough start due to bugs and a lack of content. It doesn’t help that the Fallout series had been a single-player franchise before this, so players were already skeptical about Fallout 76. Combine that with a rocky launch, and Bethesda could be in trouble. But this roadmap shows that Bethesda isn’t giving up on the project.

You can see the general roadmap above, but Bethesda has also released the below picture, which goes into detail about what is coming in the Wild Appalachia update. It will notably include a new Survival mode, which will have a more intense player-vs.-play experience with “fewer restrictions.” Right now, you can’t get rewards for killing a player unless they shoot back at you. That may be one of the restrictions that the roadmap is talking about. 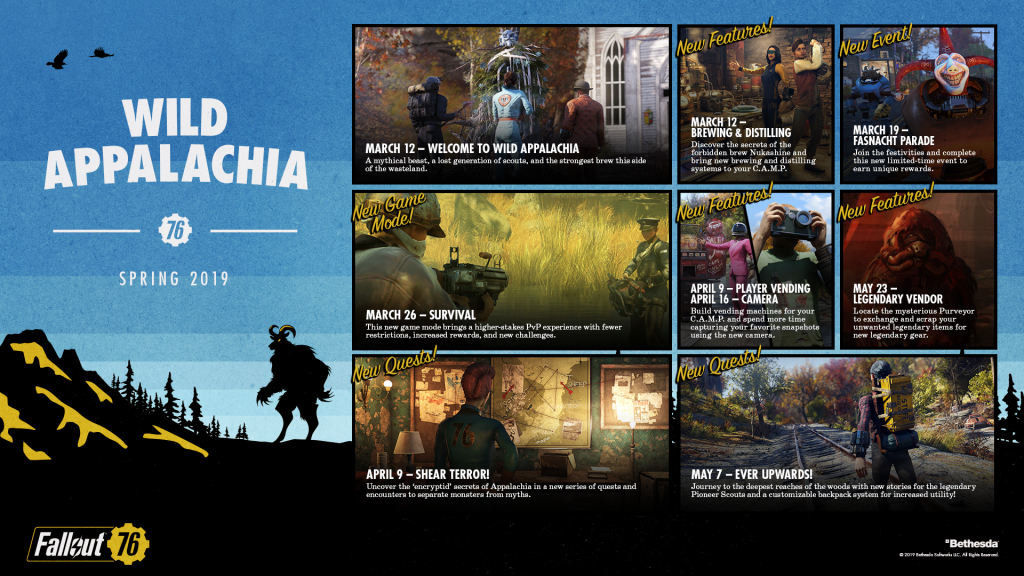 Above: Details for the Wild Appalachia update.

Wild Appalachia will also include new quests and a brewing/distilling system, which lets you make beer and liquor which can give the beneficial effects (but you can become addicted). An added vendor will allow players to scrap unwanted legendary items for new ones.

The rest of the year

The second wave starts this summer with the Nuclear Winter update. It is focusing on endgame content, including a new mode — also called Nuclear Winter — that will be “completely changing the rules of the Wasteland.” It will also include two Vault Raids, multiplayer challenges for experienced players. Players who have hit the level 50 cap will also be able to create Legendary Players, which resets their characters but gives them access to new, more powerful abilities.

The fall update, Wastelanders, will add a new main questline, features, factions, and more. Bethesda is calling it the biggest update yet.

Other multiplayer shooters like Destiny, Destiny 2, and The Division got off to rough starts. But they were all able to rebound a bit through patches and updates. Fallout 76 had a bad start, but it’s not dead yet.