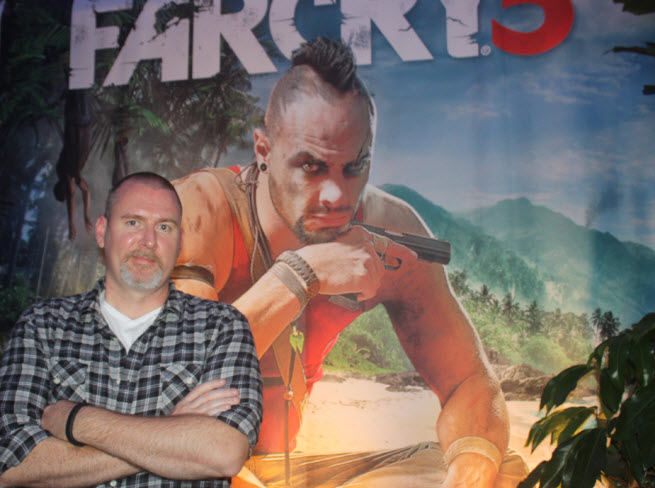 When Ubisoft unveiled the gameplay of Far Cry 3 this summer, the images and characters were unforgettable. They were either beautiful or horrific. Not so much in between. Grisly murders or beautiful tropical island waterfalls. And now that the French game publisher has unveiled even more of the experience through a hands-on demo, the dichotomy is becoming even more interesting. I got another hands-on playthrough of the beginning of the game, and I really didn’t know which path to take. 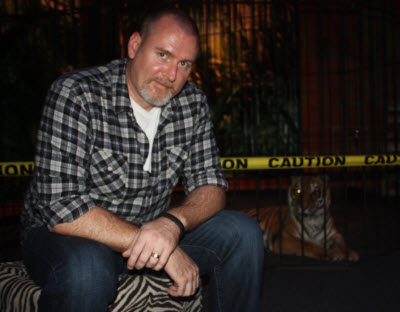 On the one hand, the story is so strong, and the villain, Vaas (pictured in poster art at top), is so bad that you just want to get right to the task of hunting him down and freeing your captive friends. But on the other hand, developer Ubisoft Montreal has built an open world with a lush tropical island archipelago for you to explore. A lot of video games must strike a balance between a straight narrative story with the capability to roam free in an open world, where the player dictates what happens in the story. 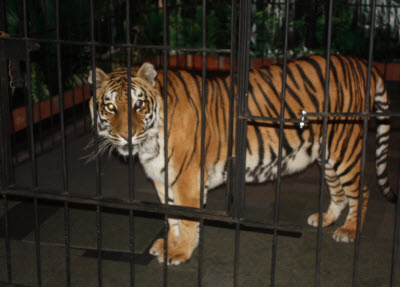 But the tough thing about Far Cry 3 is that is starts with such a good story, one that is movie-like in its appeal. It opens with a video collage of friends having the time of their lives skydiving above a tropical island. But then they are captured by a nasty villain, the fast-talking and funny Vaas, who is an unpredictable madman. You play the eco-tourist Jason Brody, and Vaas captures all of you. He starts out by playing videos on Jason’s smartphone and enthusiastically says, “This is a great phone!”

As the camera view widens on the scene, you see that Jason and his brother are tied up in a bamboo cell, and that Vaas is really one crazy mother*******. [Spoiler alert] Your brother,  a badass former Army hero, executes an escape with military precision, and the two of you sneak out of the compound. But then Vaas kills your brother as a matter of sport. The game gives you a bee-line mission. You want Vaas’s head on a stake. But you can’t do it. Your brother was the one who could have taken out Vaas. You are a poor, nervous substitute for your brother. You just have to learn how to stay alive. 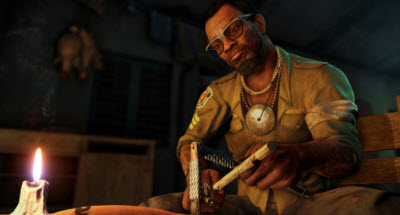 And then you have to wait. After the opening introductory sequence, you escape and meet up with Dennis (right) and Citra (below left), the leaders of the island’s natives who are fighting for control of the archipelago against the gun-toting mercenaries who accompany Vaas. In contrast to your dead brother, you are a wimp who just can’t believe what’s going on around you. In a very short amount of time, you ,must learn how to kill — or you’ll be killed. While you are doing that, you have a whole set of islands to explore and tigers to meet.

Yes, there are so many distractions on the islands, like the tigers (Ubisoft trotted out a real tiger for its recent preview event), all-terrain vehicle races, zip-line swinging, and hang-gliding. In fact, these activities were so fun that I forgot I was supposed to be finding my friends and training for that big, bloody reunion with Vaas.

“We wanted to present Vaas as this character who was very much in your face,” said Dan Hay (pictured at top), the producer of Far Cry 3, in an interview with GamesBeat. “He is very lifelike. We want the player character to feel like they are a victim. Your friends are taken from you. Your family is taken. You have to figure out how to get them back. But we didn’t want to make this about going and rescuing a friend. Rinse and repeat. There is an entire other side to the game. When you look at the open world, it’s designed to be a way to cleanse your palate. Instead of just doing the missions, you can discover and explore.”

He added, “It’s interesting to see people play the game. They intend to go rescue their friends. They wander into the open world and, four or five hours later, they remember they have to get their friends. For us, that’s a win. You can be captivated and see the island and grow. That’s an analogue for when you or I go to a place like this and you begin to live some of that life. You feel the pull of the island. Then maybe you start thinking, ‘Maybe I don’t want to go back.’ The question is how Jason, your character, responds to that. That’s what we’re playing with.” 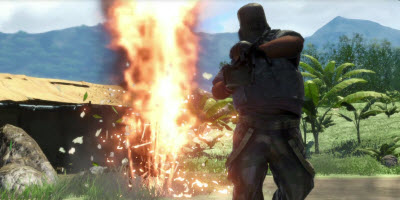 At the very least, the mixture of open world and narrative brings variety to Far Cry 3, which has to deliver a better experience to players of the first two games. Then there is another layer of creativity on top of the game that changes the gameplay. You find some wild mushrooms to heal a friend and yourself, but the mushrooms also bring on psychedelic experience. The theme of insanity takes the drug-induced nightmare episodes and busts the creativity wide open. At one point, you have to move through a pitch-dark warehouse with TVs blasting images of Vaas at you.

In one of the later scenes, Vaas sets it up. He says the definition of insanity is “doing the same thing over and over again and expecting shit to change.” He adds, “The first time somebody told me that, I thought they were bullshitting me. So, boom, I shot him.”

He complains, “I already killed you once” and then tries to drown Brody once again. Brody survives, strangles a guard under a beautiful waterfall, and then starts looking around for a way out. The mercenaries are murdering everyone. Then the combat starts, either loud or quiet. Your choice. You pursue Vaas throughout the game, and he gets tired of killing you (or so he thinks) over and over again.

Of course, none of this would be any fun if there wasn’t some crazy shooting and fighting action. Far Cry 3 has plenty of that. The weapons are awesome, and so is the melee action. You must sneak up on sentries and take them out quietly or a bullet hell rains down on you. You fight underwater, in the air, and atop giant cellphone towers.

Part of your task is to liberate the island, one cell tower at a time. The enemy has rigged the towers to detect your every movement. You have to get to the top of the towers and disable them. Once you do so, another part of the island becomes visible to you on the island map. The graphics look great on the PlayStation 3, which I used for the demo. But it had some parts where the size of the open world seemed to slow down the speed of the game. Far Cry 3 uses the new Dunia 2 engine with a physics system integrated into it. So everything from the hang glider movement to the sway of the bushes feels real. It’s an open world, baby.

I wonder whether the game is more fun this way, or if it would have been better if it were more movie-like, focused on just the story of revenge. But I’m very curious about the bifurcated experience, and I bet this question will hold my attention through the end of the game. The game debuts on Dec. 4 on the PC, PlayStation 3, and Xbox 360.