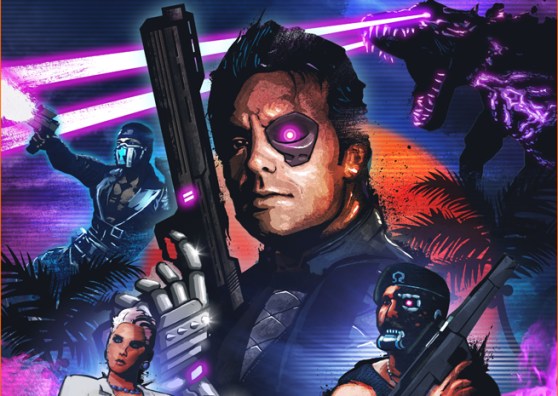 Go to enough video game presentations, and you see the same project pillars creep into the PowerPoint slides. Stuff like “immersive,” “seamless transitions,” and “freedom.”

“When were you told to stop playing with toys?” asks Blood Dragon creative director Dean Evans. “Like, that was weird. There was that unspoken-of day when you stopped playing with action figures. Fuck that shit. This is trying to encapsulate that feeling of taking two action figures and just going … .” Evans mashes his hands together and makes super-awesome action fighting sounds. I can tell he’s done this before. 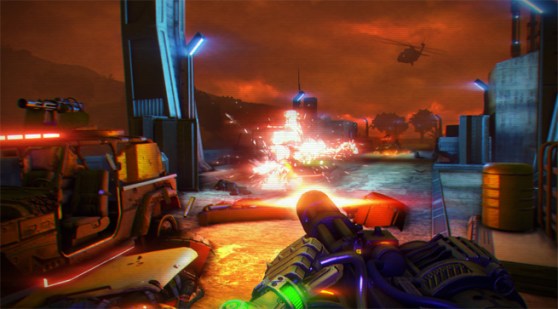 Blood Dragon (a stand-alone game releasing May 1 on PC, Xbox Live, and PlayStation Network) looked like an April Fools’ joke when Ubisoft announced it on April 1. The good news is it plays like one. The mechanics pull directly from 2012’s Fry Cry 3, but the neon-washed trappings come straight out of the ’80s. Picture a mash-up between Far Cry and the original 1987 Contra arcade game.

Yes, that means you fight robot sharks and a dragon shooting lasers from its eyes, as God and Ronald Reagan intended.

It also includes classic 16-bit cutscenes and the absolutely worst, cheesetastic writing Evans and his team could devise. You carry a laser rifle and RoboCop’s gun as a sidearm (burst-fire is intact, but its distinctive sound effects changed). In keeping with the ’80s B-movie vibe, Evans even assigned a real-world $150 budget for costumes. Your killer cyborg enemies wear modified toasters, motorcycle helmets, vacuum cleaner parts, and spray-painted football shoulder pads for that authentic futuristic look.

And it’s with unsuppressed glee that Evens tells me his audio director was the sound designer on Airwolf. Oh yeah. They’ve got the retro vibe down. 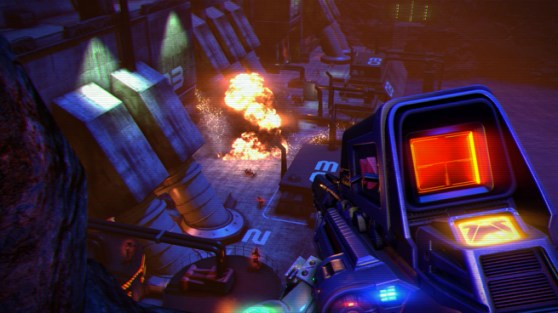 The demo put me in the cyborg boots of Sgt. Rex “Power” Colt — “Half man, half machine, all cyber commando!” and voiced by actor Michael Biehn (Terminator, Aliens) — in the far-future year of 2007. A veteran of Vietnam War II and a survivor of the global thermonuclear war that destroyed the world again in the ’90s, Rex goes on a revenge-filled mission of vengeance to kill the hell out of his former cyber-commanding officer.

So that’s way too much plot, but Blood Dragon immediately dropped me behind a helicopter minigun and told me to hose an enemy killer-cyborg complex. The tutorial happens after. That one element alone shows more self-awareness (“press A to prove you can read”) than the last three Duke Nukem games combined. Later on, the tutorials do their best to simply piss you off.

“Just let me kill people, dammit!” shouts Rex right around the same time I thought it.

Developed at Ubisoft Montreal, Blood Dragon will offer the same kind of open-world gameplay as Far Cry 3 proper, though the full map wasn’t open for exploration yet. The demo missions still kept my options wide open. Told to wipe the complex clean of enemies, I stealth-killed a few, stole a jeep and mowed a few down, climbed up on a roof, marked the rest with my cyber eye, and then made them eat laser. Except for the ones I blew up with grenades, because what’s the ’80s without explosions?

All the camp makes it tempting to not play Blood Dragon like Far Cry 3 — that is, smartly — but walking out into the open with a gun still gets you in deep trouble fast. That might be the one downside: The recycled Far Cry 3 mechanics are as smooth and rewarding as ever, but they don’t feel nearly as ridiculous as everything else. Particularly when you’re saddled with “Spider” Brown, your blaxploitation cyber-commando partner. Guess how long he lasts.

Actually, it’s part of your job to keep him alive longer than the average ’80s action-movie sidekick. That’s quite a challenge when you have to fend off waves of killer cyborgs while he just stands there, screwing around with a computer terminal.

“You tell her that yourself!” growls Rex. This might be Michael Biehn’s finest work ever. 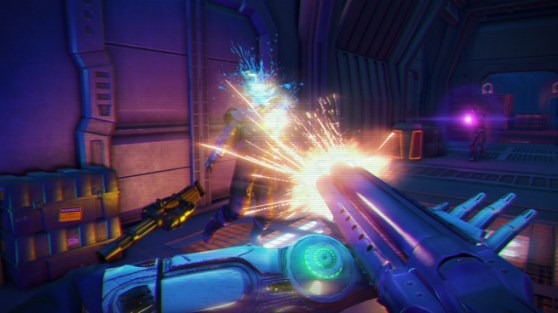 Sure, it’s a standard-issue Horde mode/escort mission, but I was too busy laughing my guts out to care too much. Playing Blood Dragon took me back to a ludicrous time with ludicrous movies that only get more wonderfully awful with time. It felt good to pay it a visit. But while it made perfect sense while rolling through a real Blood Dragon game, I had a little trouble believing anyone would buy this whole concept on paper.

“I had a 50-page presentation,” said Evans, who had to convince franchise lead Dan Hay on his whacko ideas. As it turned out, he didn’t need to go past the third slide. “It was ‘A VHS vision of the future.’ Dan grew up in that era. He got it.”

So do I. And as far as the demo goes, I can confirm Evans nailed at least one of his pillars: “Fun.” 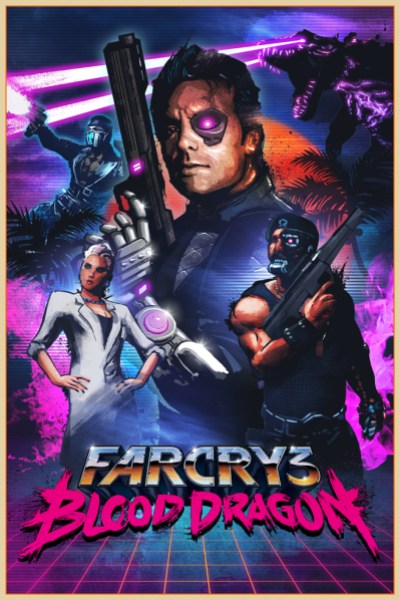