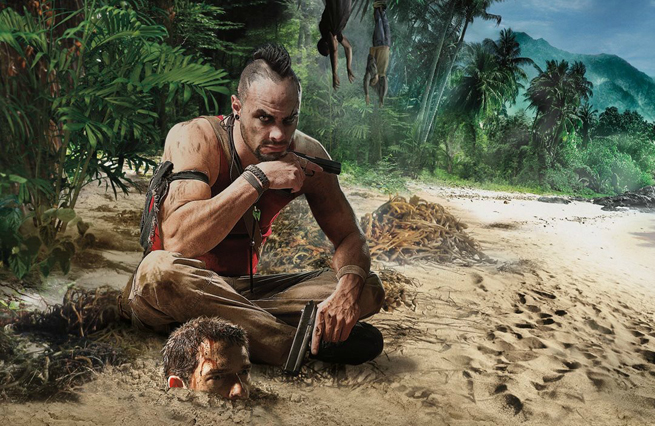 Who in their right mind goes to a jungle paradise anymore? They’re all full of deranged killers and surrounded by shark-infested waters! And then you kick off with a douchebaggy opening montage of superprivileged twentysomethings partying hard in the tropics? That practically mandates that they’ll suffer and die courtesy of the bloodthirsty maniacs de jour.

Wish granted. Far Cry 3 goes dark about 30 seconds later, and it stays dark for the next 25 hours.

Publisher/developer Ubisoft Montreal delivered two open-world, action/stealth games this season, but only one truly commands attention. Far Cry 3 (available Dec. 4 in the U.S. for Xbox 360, PlayStation 3, and PC) is the game I wanted Assassin’s Creed III to be. It doesn’t always measure up perfectly to the other top-tier titles of the last few months, but as the last major release of the year, it authoritatively ends 2012 on a high note. 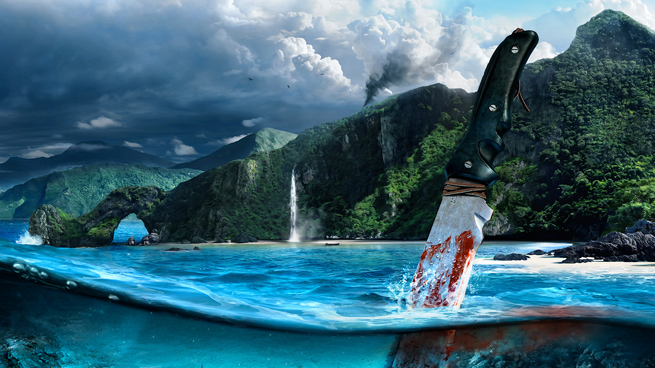 The jungle
Far Cry 3 doesn’t waste any time dumping you in the worst situation imaginable and then doling out the tools you need to conquer it at a brisk clip. You play as Jason Brody, a directionless kid who’s genuinely not ready to take on an army of murderous pirates. Almost by default, he falls in with the Maori-like Rakyat, a local tribe currently losing a war against those invaders, and there he finds his true purpose in life: rescuing his captive friends and family, saving the Rakyat, and killing every other living thing on the island.

And that island really is quite a playground. It’s a huge, lush, breathing environment with plenty of hidden spots to discover and explore. On top of 38 story missions, add well over a hundred side missions and several hundred collectibles (if you’re into that sort of thing), and that doesn’t even cover random encounters. Animals roam freely, and pirates/security thugs constantly patrol in jeeps; they won’t hesitate to chase you down whether you’re on foot or behind the wheel. Yes, it’s annoying to run into a dozen enemies when I was just out trying to skin a pig for crafting materials, but really, I should’ve been more careful.

The gunplay threads the needle right between tactical shooter and a looser arcade feel, with an accent on stealth to whittle away baddies before committing yourself. Ammo always feels a little scarce. Hostile numbers become overwhelming fast if you’re not ready. Your most valuable piece of equipment isn’t a gun but a camera that tags enemies and animals so you can track their movements as you sneak around … or for when you’re ready to engage directly. Both earn experience points toward a fairly comprehensive upgrade system in which you boost skills and attributes to complement your playstyle.

I spent most of my time creeping up behind people for a satisfying, instantly lethal takedown. Upgrading lets you chain those knife attacks indefinitely so long as enemies are within reach — that’s a beautiful thing. You can always charge in guns blazing, but you’ll see fewer reload screens with a more balanced approach, solving tricky layouts with your head more than your trigger finger. One standout mission tasks you with torching a few heavily guarded marijuana fields, and it plays beautifully if you quietly work the map, deleting baddies without any drama until you’re ready to announce your presence.

Then the game rewards with a tense gunfight where only a few mistakes at the wrong moments costs you big time. That makes it all the more thrilling when you pull off the upset. And that happens all the time in Far Cry 3. 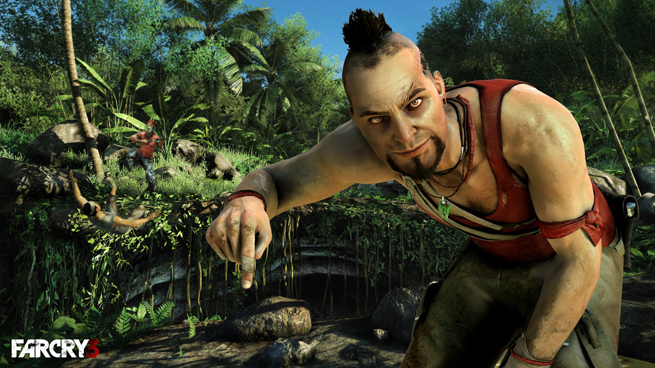 The villainy
Every great story needs a really good bad guy, and Far Cry 3 has one of the best I’ve seen across any media in a long time. His name is Vaas. He’s violently insane, and it’s a genuine pleasure to watch him work. I generally don’t call out video game actors, but Michael Mando — who provides both the voice and motion-capture work for Vaas — put real menace into his performance. The physicality, the quirks, and the intentionally jarring shifts in tone, demeanor, and volume add up to a nemesis who sticks in your thoughts even when he’s offstage. I never knew what Vaas would do next, but I never doubted he was out there cooking up his next atrocity, bless ‘im.

And he’s not even the guy in charge.

In fact, Far Cry 3 excels with all its not-quite-right adversaries. Treasure-hunting Buck’s smartass charms take on an especially dark tone given how he purchased, tortured, and possibly raped Jason’s best friend. As gleefully cruel as Buck is, nobody in Far Cry 3 enjoys himself more than big boss Hoyt Volker, the most successful slave, drug, and weapons trafficker in the hemisphere. He’s a guy who loves who he is and every malicious thing he does. He kinda hopes you do, too.

Nobody commands a room quite like Vaas, but every evil-doer on the island proves a compelling opponent, and you’ll love putting them down like the rabid dogs they are. 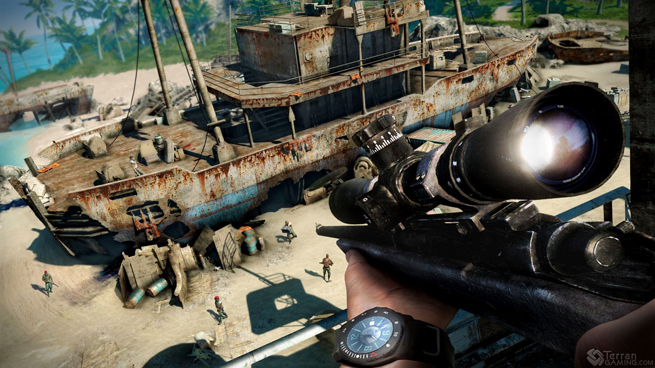 The accessibility
Open-world games usually make me feel like I’m wasting a lot of time just getting from Point A to Point B. But despite an absolutely immense map, I rarely felt anything was too far out of reach. At least not after I unlocked a few quick-travel spots.

And unlike Assassin’s Creed III, Far Cry 3 gives you real incentives to climb towers and exterminate the local wildlife. The former doesn’t just open up map details; it also shows you nearby points of interest and gives you a 100 percent discount on a few pricey guns at your local market. The latter plays into the game’s crafting system, and it’s smart enough to be important without ever getting in your way. You can make do with the flimsy gear you get for free, or you can go bag a few animals for the materials you need to upgrade. Other shooters give you four weapon slots for free. Far Cry 3 makes you earn them.

Want the best upgrades? Then you’ve got to hunt the most dangerous game. Nabbing that last weapon slot means taking down two bull sharks before they rip you to shreds. It’s not an arcane system of figure-it-out recipes like you find in The Elder Scrolls, either. It’s easy, streamlined, and necessary rather than punishing.

But not everything in Far Cry 3 is quite so smart.