Three EA and Ubisoft veterans started Typhoon Studios in February, and they’re now ready to talk about their first game — sort of.

The trio danced around what exactly their debut project would be — which 505 Games will publish — but they know what it won’t be. It won’t have long cinematic sequences or sweeping narratives where players press buttons in between. It won’t have loot boxes. It won’t be only multiplayer. And, cofounder Alex Hutchinson says, “I can guarantee it’s not a battle royale game.”

The former Far Cry 4 creative director founded Typhoon alongside executive producer Reid Schneider and technical director Yassine Riahi. The three have worked together in some capacity or other over the years. Riahi and Schneider were both at Warner Bros. Montreal working on the Batman: Arkham series, and all of them were part of the team behind Electronic Arts’ Army of Two. They’re industry vets who have worked on blockbuster titles, and their takeaway from their years of experience?

“We can promise you there are no loot boxes,” Schneider said in a phone call.

“No loot boxes!” emphasized Hutchinson, adding, “Another way of saying that is, we were joking about how we wanted to go with the radical business model of asking people for money and then letting them play the game. It’s novel. It’s a little retro. But I think that’s still a healthy business model.”

The Typhoon trio couldn’t reveal too much about the game, which already has a publisher (which will also remain mysterious). However, Schneider says that “without going into too much detail,” the team thinks that online is crucial.

“At the same time we want to play to our strengths,” said Schneider. “It’s not like we’re saying, ‘Hey, we should do an MMO! That’s going to work really well!’ But we want to be doing something in the online space.”

According to Hutchinson, the market is growing and splitting into different types of games that target various audiences. This means they can hone in on the type of project they want to work on without stuffing every kind of mechanic or story idea into one.

On the technical side, that means they’re not going to put features in “just for its own sake.” The studio is using Unreal Engine 4, and Riahi says that their experience at triple-A studios have set them up nicely for the endeavor of their debut game. 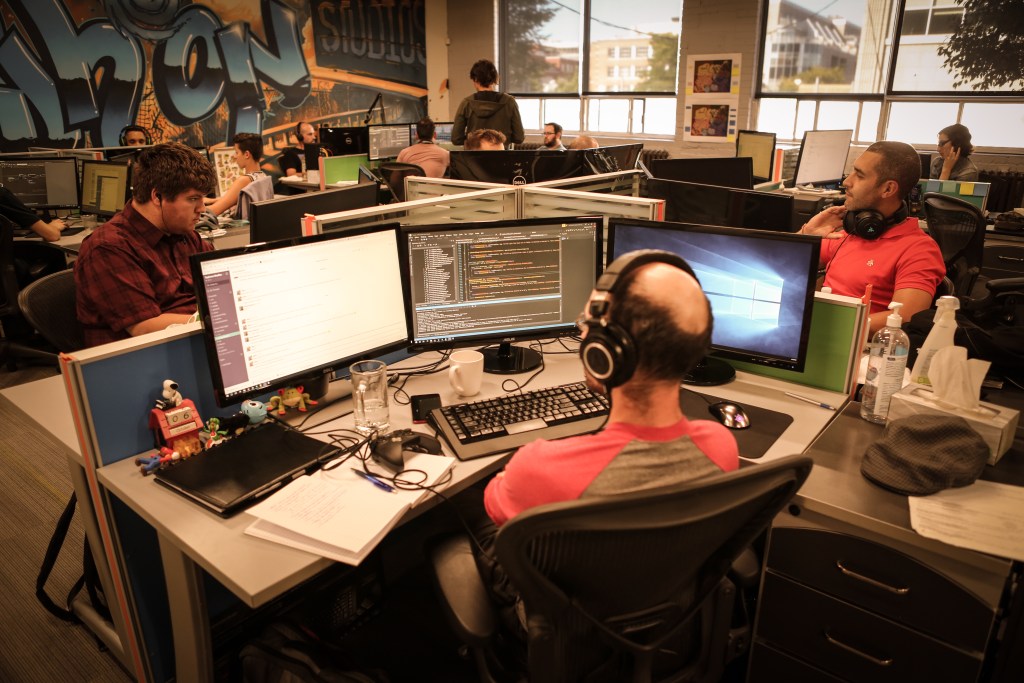 Above: The folks at Typhoon Studios have worked on such games as Far Cry 4 and Batman: Arkham City, such as technical director and cofounder Yassine Riahi, programmer Alex Gagnon, and senior programmer Alex Viens.

“We definitely acquired a lot of expertise working with big studios and big games and big teams, taking on very challenging parts of the project,” said Riahi. “With Arkham City we had to modify the Unreal 3 engine so much to make the streaming capabilities work, to load parts of Gotham City very quickly with the Batmobile. That required a lot of tech work, to make the engine capable of that. Here at Typhoon we try to use our experience to judge if a feature is worth investing in technically. We try to use as much as possible the features of Unreal — we’re using Unreal 4 — to optimize the return on investment for all the features we want to create, and really focus on the player-facing systems, gameplay systems.”

Typhoon’s team is 20-strong now, and it’s aiming for a “mid-sized” game — something like Campo Santo’s Firewatch or Ninja Theory’s Hellblade: Senua’s Sacrifice in terms of polish. That’s their strategy for “rising above the noise.” But the ultimate goal is to continue making games, not just to create one large title and continually support it.

“If we look at the DNA of the first game we’re building, the goal is then to be able to use that, whether it’s the technology, or some of the choices that were made, and be able to use that as a launch pad for future projects,” said Schneider. “The win condition for us — if you look at — obviously these are some of the best people who do this, but if you look at what Bethesda does, where it’s Fallout to Skyrim, a lot of the DNA is very similar. The games are totally different, but they clearly have an expertise in building these huge open world RPGs. Obviously we’re not making one of those. But what they’ve done really smartly is they’ve found a niche and they really push on it. That’s exactly how we look at it as well.”

To support their mysterious un-battle royale, un-MMO, non-loot box, but-definitely-online game, Typhoon has found investments from places like the Makers Fund. Hutchinson says that they’ve had the most luck with younger investors — the ones in “more traditional spaces” are scared by how unpredictable a game’s success is.

“Entertainment formats like movies and TV and games are highly unpredictable, and so you sort of have to find people who love games,” said Hutchinson. “I was joking early on that this would come around because there are lots of people who invest in American cinema because they want a producer credit, because they just love movies. And then there was a generation that didn’t grow up on games, so they didn’t care about getting a credit in a video game. But now you look at the younger people in the VC world, they really did grow up on video games instead of movies, and they’re interested in getting involved.” 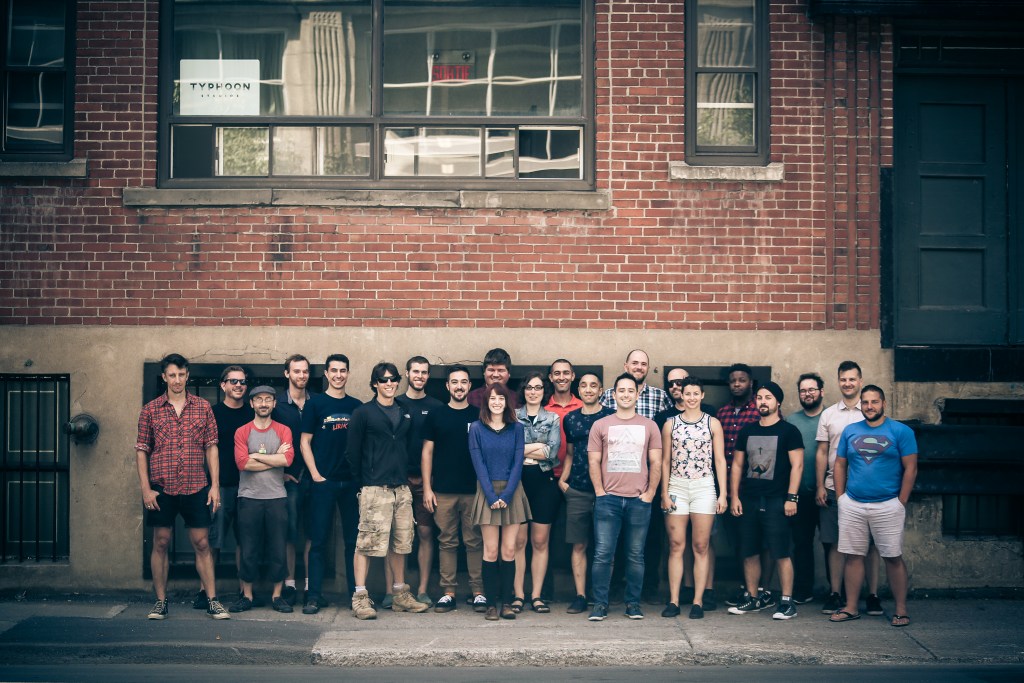 Above: The team at Typhoon Studios.

Typhoon’s debut game has also signed with a publisher, which they’re also keeping mum about who exactly it is. It’s a publicly traded company, though — so maybe Team17? Or EA, welcoming back its former developers? The three won’t say.

“So far they’ve been amazing to work with,” said Schneider. “Their interests are really aligned with ours. The cool thing is, since we were self-funded for a long time, we were able to come to the table saying, this is what we want to build. Here’s a real working prototype. They were on board with that vision. That changes the equation in a meaningful way when you talk to a publisher.”

Hutchinson says that indie publishers have a lot of opportunities now in the indie space, and he compares them to different music labels, each collecting portfolios of certain types of titles that fit their vision.

“When you start a music label, you’re not going to start a label to do every kind of music. You’re going to do a particular genre of music,” said Hutchinson. “I think that’s really interesting and really healthy. You get people who are excited about types of games, who know what’s good and know what to push and know who to communicate with in the audience. As the market as broadening, that’s really helpful.”

Though Typhoon is guarding its secrets closely, it says that it will make an announcement “on the sooner side.” The meantime, it seems like the studio is sure of its path — and where it won’t go.