Far Cry 6 has another memorable villain in the form of “El Presidente” Antón Castillo, played by actor Giancarlo Esposito. And it has an interesting story about how this villain, the dictator of the Cuba-like island nation of Yara, trains his young son to be ready to be a better dictator.

The game is coming out October 7 on the PC, consoles, and Stadia. I played couple of parts of the game in a preview session with publisher Ubisoft, and I got a feel for some of the storytelling across the huge open world.

Castillo’s son clearly doesn’t want to have anything to do with running the country, and he dreams of escape. But Esposito — who has starred in Better Call Saul, Breaking Bad, and The Mandalorian — uses his twisted wisdom and not-so-charming charm to try to pull the kid back into his orbit. You play as Dani Rojas, a guerrilla who’s part of a group trying to overthrow Castillo.

I spoke with Navid Khavari, the narrative director for Far Cry 6 at Ubisoft, about the father-son story and the story structure for the open-world game. 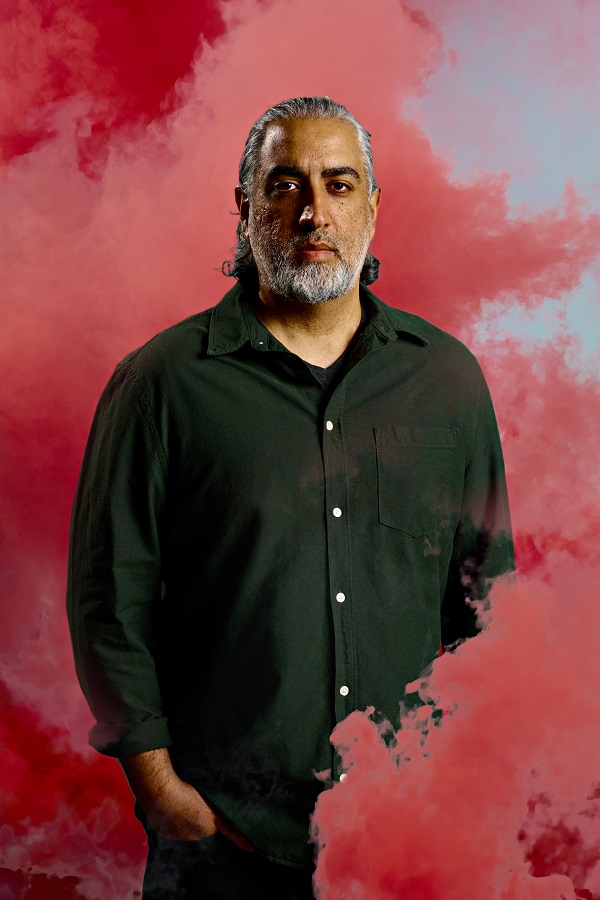 Above: Navid Khavari is the narrative director for Far Cry 6.

GamesBeat: What did you want to achieve with Far Cry this time?

Navid Khavari: The main thing we were looking to do was to straddle two things: to create an epic, sweeping narrative that will have players circumnavigating the entire island, fighting for a revolution, but also to tell a very personal story, a character-driven story. Really, those were the two guiding lights from the beginning, while keeping in line with our franchise history, that we’re an open-world sandbox with a charismatic antagonist. But what we really wanted to do with the narrative this time was an epic story with heart.

GamesBeat: Even going into this cold, some people would be familiar with the history. What about the history of these kinds of island revolutions was worth exploring more?

Khavari: What was powerful to us was the notion that these revolutions — we like to see them almost as homogeneous. It’s very simple. There’s one group fighting an authoritarian regime. But if you do some research, when we looked at both the history of countries like Cuba, but also looking at even recent protests in Venezuela, in Colombia, or even the Arab Spring, you find that there’s multiple groups at the outset and throughout that are trying to become a whole, to take power and fight back. 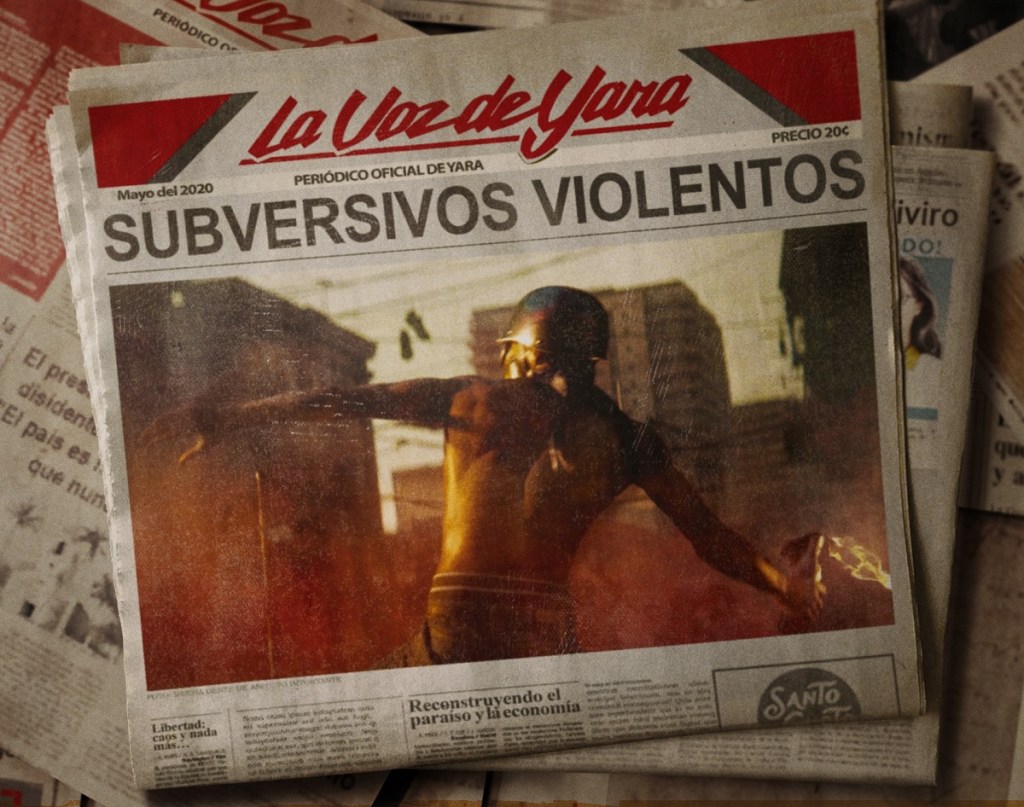 Above: A newspaper about violent revolution in Far Cry 6.

That’s what was fascinating to us. Not everyone wants the same thing or has the same goal. They might want to get rid of who’s in charge, so in this case Antón Castillo, but who are the different personalities within that revolution? In Far Cry 6 we have the legends of ’67, these old guerrillas that fought back in the ’60s, who need to find a way to work with the younger generation. We have farmers who really aren’t worried too much about the rest of the island, but they’re focused on their farmland. We have a protest group called Maximas Matanzas, these more urban dissidents who are fighting back with their voices and their music. That’s what was exciting. We have a tendency to see these revolutionary groups as one personality, when it’s anything but. We wanted Far Cry 6 to reflect that.

GamesBeat: When I saw the first trailer, I thought the main character was going to be the son. That turned out not to be the case. What was your reason for doing that?

Khavari: It goes back to Antón himself. What we wanted to do this time around was–at its heart Far Cry almost always has a charming antagonist. With Antón — I’m trying not to say the word “villain” so much, because “antagonist” sums it up more. But it started with [this idea]: What would it be like to sit in the living room of a dictator? With the press and the cameras and everything away, what would it be like to hear their point of view?

When we started thinking about that their family would be around, their children. That was a sort of lightning bolt moment. We’ve never seen this sort of dichotomy between a father who is so hell-bent on his vision of the country and doing it by any means necessary, feeling justified in doing that, and then a son who loves his dad, cares for his dad, but knows inherently that there’s something wrong about what he’s doing.

It’s a bit of a triad. The player is the third piece that comes in and disrupts all of that. With Diego, I describe it as almost like the razor’s edge. You don’t know whether he’s going to follow in his father’s footsteps or find his own path.

GamesBeat: With the father-and-son story here, I wondered if there was ever any thinking among the writers that even a person like this might hold back in the presence of his child. But instead, we get to the very start and Antón says, “Here’s a grenade. Throw it or not.” Does the father ever show that he has some understanding of being a father to a child, rather than always being the dictator?

Khavari: I don’t want to spoil anything. But Antón has an empathy for his son. You have to look at Antón’s own past, because Antón himself, his own father, Diego’s grandfather, was in power, was in charge of Yara, and then was killed by revolutionaries in 1967. Antón had to grow up very quickly. He was thrown into prison, had to work in the fields in prison, and then he gradually found his way back to power. In a sense Antón is raising his son the only way he knows how. He realizes he has a mission he needs to accomplish through Viviro. He is going to save Yara by building this cancer treatment and creating a slave workforce to do it. 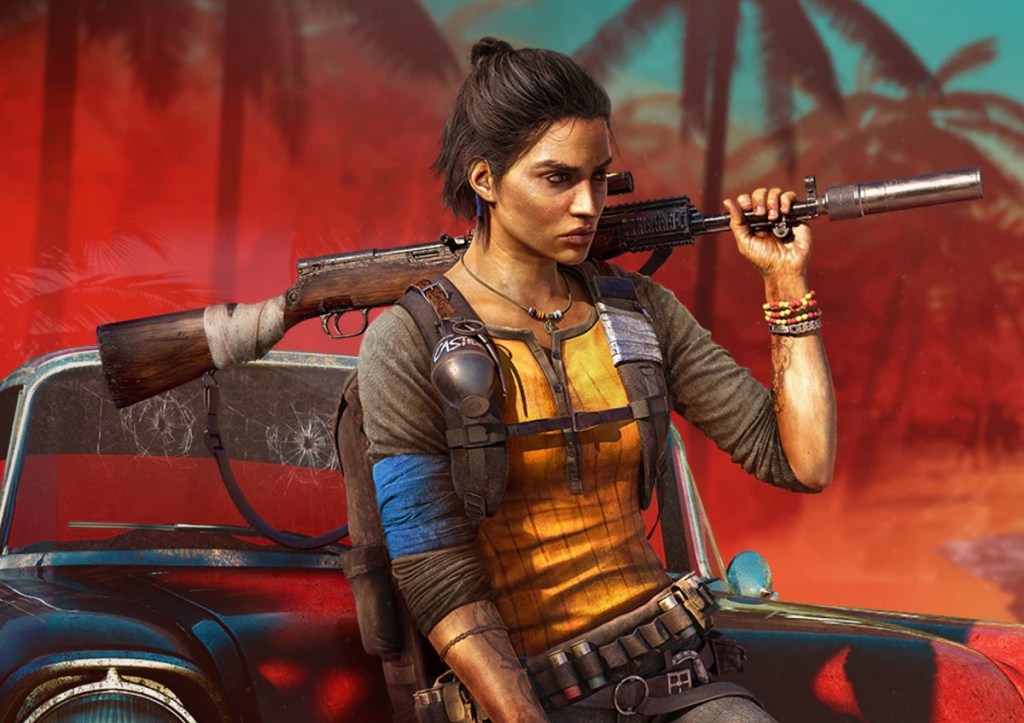 Above: You play as Dani Rojas, a guerrilla fighter in Far Cry 6.

There’s a melancholy that Antón has toward Diego. Hopefully, you’re able to catch that in some of their scenes. He understands that Diego is never going to have a childhood. He has no choice but to raise Diego as a ruler, a dictator. In his eyes, he’s doing what he needs to do to protect Diego and give Diego the skills to rule once Antón is gone someday. It’s a complex relationship. I think Antón is very aware of what he’s doing. There’s a sadness to that, a tragedy.

GamesBeat: Were there challenges around having a very long game, when you contrast that to something like a movie that tells a story in two hours or so?

Khavari: Going into it, the length of the game really depends on how you play. That’s the beauty of Far Cry and the open-world narrative structure. But yes, it’s a massive, epic story. There were huge challenges. At the same time, it was exciting. I kind of liken it to — we did almost four seasons of a Netflix series and put it into one package.

What was great about it was that we were able to spend the time telling very personal stories within the context of the revolution, while also having this epic thread that covered it all. In one of the early discussions we had, I talked about how many stories come out of the [U.S.] Civil War. You can fill books and books and movies and movies with these harrowing stories. It was a challenge we embraced.

We used that TV structure as far as how we built and staffed the room. We developed a writers’ room of fantastic writers, and we just continued through the whole course of the game, jamming out ideas, coming up with multiple storylines, and giving everything a narrative lens. In a way, whatever is going on in the game would eventually come through the writers’ room, and we’d make sure everything was consistent. It’s a lot to keep track of, for sure. But I think it allowed us to have a really large canvas to tell the stories that excited us.

Above: Guapo is your alligator companion in Far Cry 6.

Khavari: [Laughs] I want to find out who actually was first. That’s what I want to know. Where were you in the writers’ room when you landed on the Loki gator? Who knows? There’s always time. But that was the team. The number of names that went around when that happened was super fun. We needed that. It was great.