Forget about your fancy guns. Sometimes a man just needs a club and a saber-toothed cat to conquer his enemies.

Far Cry: Primal, which comes out on February 23 for PlayStation 4 and Xbox One and March 1 for PC (I played the Xbox One version), takes Ubisoft’s open-world series into the Stone Age, a setting we don’t often see in gaming. It’s definitely a cool word to explore, showing us just how brutal early humans had it. But is it a good fit for Far Cry’s particular take on first-person action?

Well, it is. But, at this point, that whole Far Cry thing is beginning to feel a little tired. 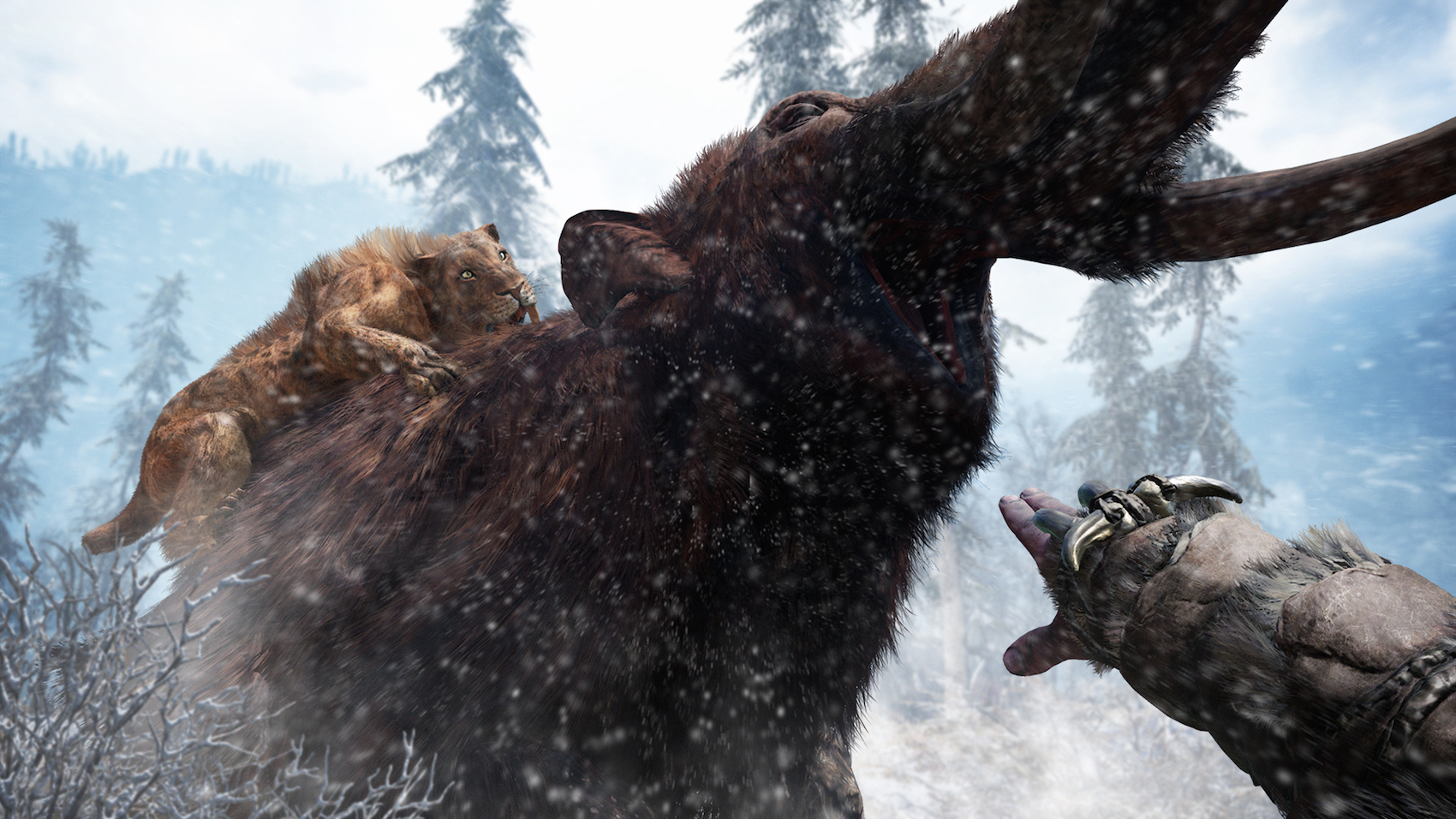 Above: Dude, where’s my mammoth?

Far Cry: Primal’s setting intrigued me. Primal proves that the Stone Age works well as a digital playground. While most first-person games focus on shooting guns, Primal restricts you to simpler weapons like clubs, spears, and a bow.

Having a limited set of weapons actually feels nice. You spend less time comparing the minimal differences between seven different shotguns. It also encourages you to dive into Far Cry’s stealth mechanics, since your limited arsenal can make an all-out fight more difficult.

And while I probably wouldn’t know what exactly an authentic Stone Age experience is, Primal feels real with its brutal, often ugly interpretation of early humans. The characters have scars and horrible burns, and they’re missing limbs. They also have a habit of … pissing on their enemies. It definitely feels primal.

And don’t think that the Stone Age setting limits the open world’s aesthetics. The large map has plenty of variety, including forested areas and snowier places. It’s a rich, detailed world that feels more wild and dense than many others you find in games. 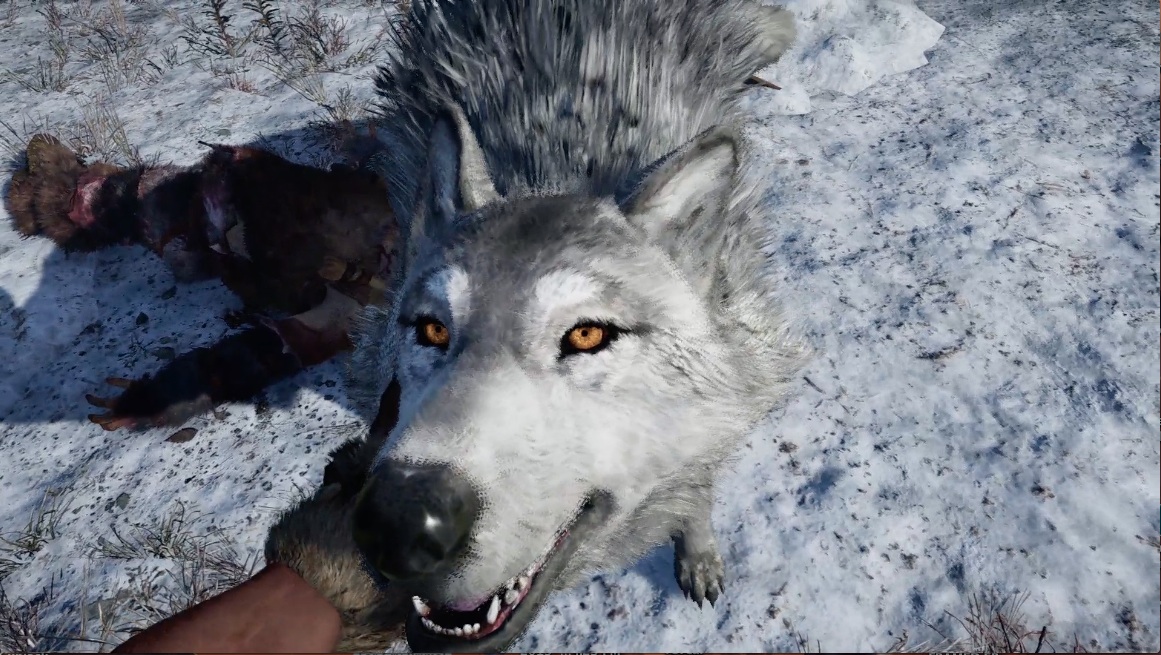 Above: We are friends now.

Hunting has been a part of the Far Cry series for a while now. You need animal skins and other materials to create and upgrade items. But all of that hunting makes a lot more sense in Primal, since, you know, you have that whole hunting-and-gathering thing going on.

This open-world hosts home to oodles of different animals, many of them dangerous. You’ll deal with them unexpectedly while traveling, but sometimes, you’re hunting a specific creature because you want to upgrade your bow. You need animal parts (as well as rocks, wood, and plants) for all sorts of items: weapons, medicine, and even outfits that will help you survive in the cold. It all makes the hunting-and-crafting system fun and rewarding.

You can also tame animals, giving you an ally to fight at your side. Your animal companions become indispensable, since they can help you hunt or clear out enemies. You can even ride some of the larger prehistoric critters. You also have an owl friend that can survey areas, marking enemies and making it easier for you to infiltrate hostile areas.

Despite the new setting, I’m feeling some Far Cry fatigue. Mechanically, this is a similar game to what Ubisoft has been doing since 2012’s Far Cry 3 … and then again with Blood Dragon and Far Cry 4. You clear outposts, you hunt animals, and you do some relatively simple missions that usually don’t involve much more that traveling to some place and killing things.

Primal works fine in the Far Cry skin, but I do wish Ubisoft shook things up a little bit more. It feels like Far Cry 4 just came out, probably because it just came out a bit over a year ago. As Ubisoft is learning with Assassin’s Creed, these kinds of open-world epics don’t really lend themselves to yearly (or practically yearly) releases. 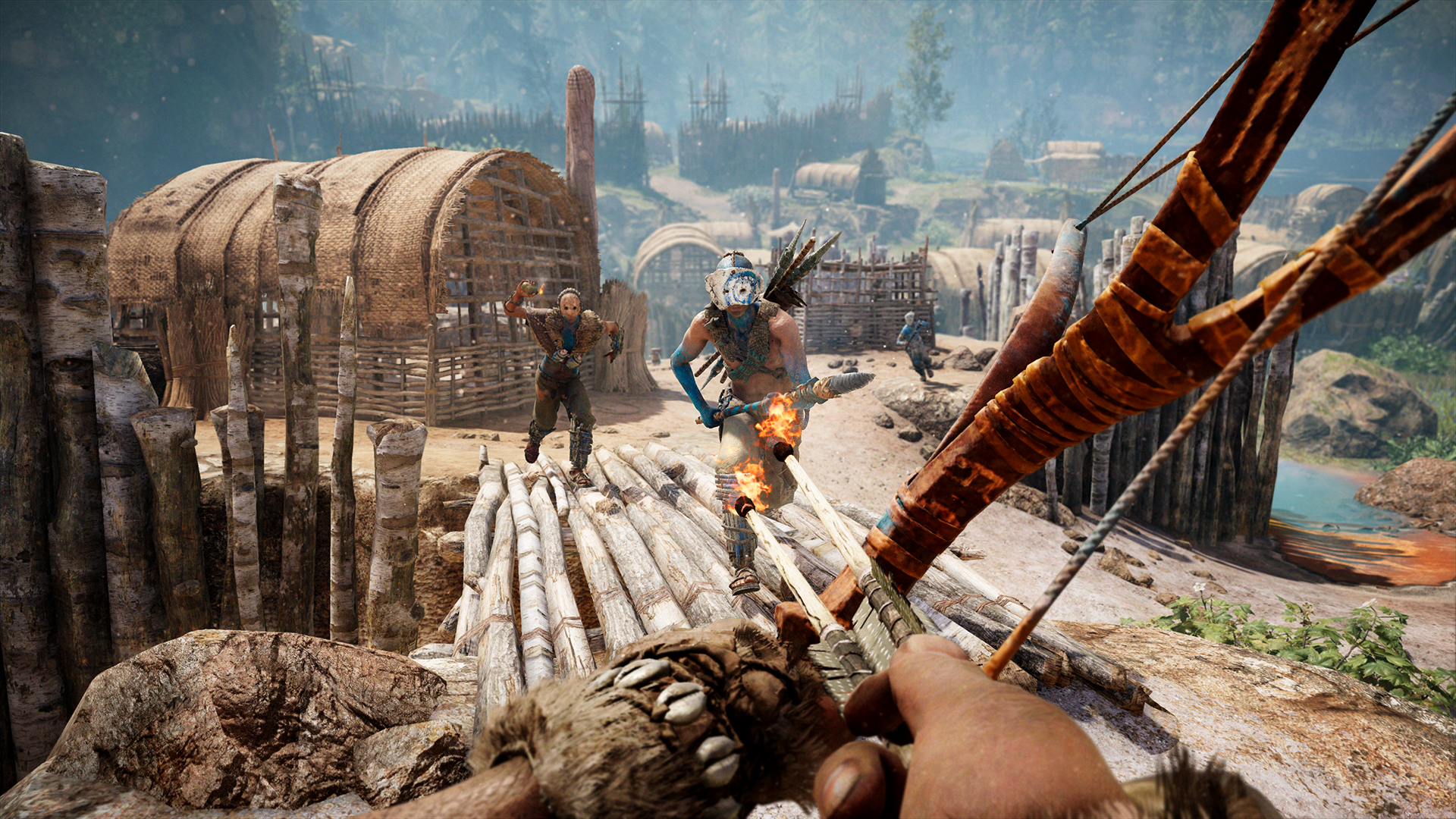 Above: You better be good with a bow.

You’d think that with the focus on cavemen, Ubisoft would beef up Far Cry’s minimal melee combat systems. Sadly, they’re still pretty miserable. For short-range attacks, you have clubs and spears. You can swing clubs, and you can stab with spears. You can’t block, parry, or do any of that more complicated stuff.

Now, you can throw all of your weapons, which is much more effective. Sure, they might break, but most of them are easy enough to craft. Besides, trading blows with an enemy is often a death sentence for your character, since other foes will take easy shots at you while you swing away like an idiot. Some of the tougher baddies take so many hits to kill that it really isn’t worth it.

You’re going to spend most of your time with the bow, which is kind of a shame. Shooting people with a bow and arrow is fun, but it’s not exactly what I first think of when I image “caveman video game.” Again, it makes it feel a lot more like the other Far Cry titles. 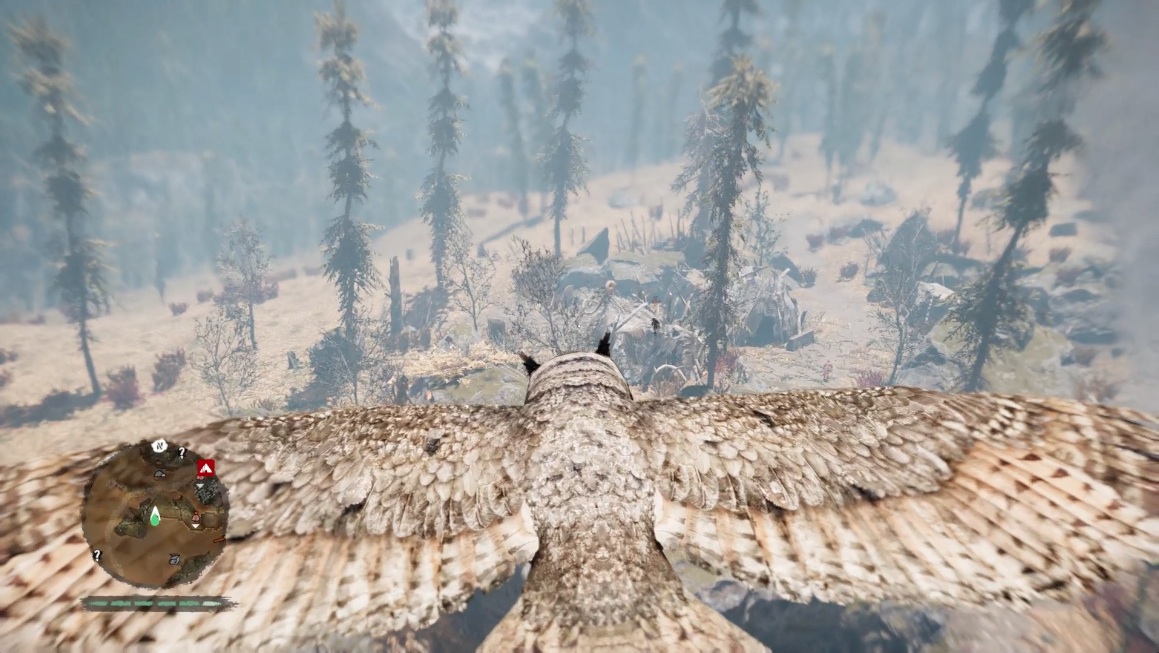 Above: Thank god for this owl.

Far Cry: Primal shows us that gaming still has plenty of interesting worlds to take us to. Its Stone Age setting really is its best quality. Sadly, the series’ formula is beginning to feel familiar and, frankly, a little dull. The first-person combat is tedious, and I think I’ve cleared out enough enemy camps for one lifetime.

This open world offers a lot of activities, and you can have a good time just running around, exploring, and hunting animals. It’s definitely a meaty, well-made game. I just hope that the next Far Cry brings along more new ideas to go along with the cool setting.