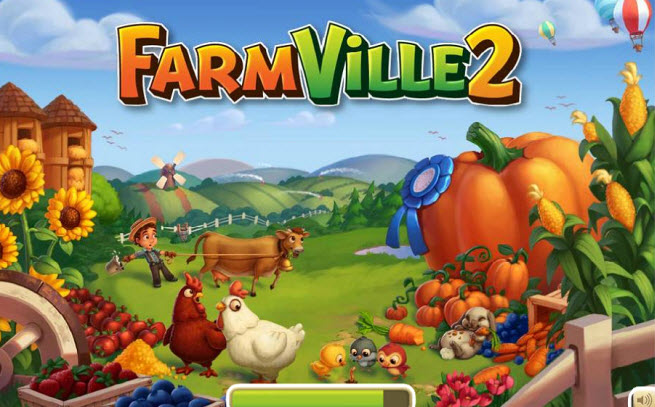 Three years after its launch, Zynga‘s FarmVille social game has 3.2 million daily active users. That’s just a tenth of its peak. But Zynga is still betting that there’s a farmer in all of us, and it’s launching FarmVille 2 today to get us back behind the plow. As Zynga’s earnings take a dip and its industry-changing “Ville” series of social games lose their novelty, the company has a lot at stake with FarmVille 2. As FarmVille grew its audience to as 83 million monthly active players, it introduced social games to the mainstream and became one of the most broad-reaching titles in history, even as critics said it wasn’t really a real game. So the remake is akin to Zynga’s best shot at launching social gaming 2.0. 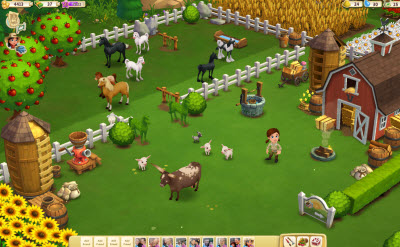 From the start, Zynga wants players to see that the game is visually richer and has a more personalized feel for what it is like to run a farm, according to Tim LeTourneau, the vice president of games at San Francisco-based Zynga, in an interview with GamesBeat. You now run a farm as an ecosystem, where your actions and help from your friends lead to real causes and effects. In short, FarmVille 2 appears much more like a living simulation of how to run a real farm — it’s a real game instead of just a mindless clickfest.

LeTourneau and FarmVille 2’s director of design, Wright Bagwell, both joined Zynga around 18 months ago after they left Electronic Arts. Their team had both social and traditional gaming experts.

“We asked ourselves, ‘What does the next generation of FarmVille look like?'” said LeTourneau. “We are reimagining and reinventing FarmVille, taking advantage of Zynga’s learning in the social space and what we bring from traditional gaming. For those who aren’t playing FarmVille anymore, we tried to reimagine virtual farming and bring those people back. It was our goal to make this a more intimate farming experience.”

Like the original, FarmVille 2 is geared toward people who want to play for five minutes a day and interact with their friends. The farm is a means of self-expression. Each day, players harvest over a billion virtual crops. To date, “farmers” have planted 50.4 billion white grapes. The original was so novel at the time that it soared to 10 million players in just six weeks when it debuted in June 2009. It set Zynga on the road to becoming a billion-dollar-revenue company by 2011. 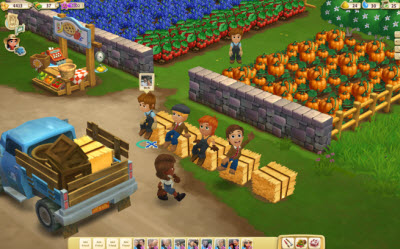 The original FarmVille will continue to operate, and Zynga will continue to support it. But the new FarmVille 2 has better graphics based on the Flash 11 format (and Stage 3D) that Adobe has created to improve animations in web-based games. The characters and animals are created using 3D graphics though they are displayed in the familiar isometric, two-dimensional perspective. The animations look more fluid, and the landscape is more interactive as you move your mouse cursor over the screen. FarmVille 2 is an attempt to capitalize on how web-gaming technology has moved forward in just three years.

FarmVille 2 invites players to return to their old family farm with the hope of making it thrive again. You can do so by planting and harvesting crops, raising cute animals, and crafting fresh goods to sell in a roadside stand or to the local grocer. Friends can sit alongside your farm on hay bales until you assign them a task to perform in your fields. Each action performed by a “farm helper” is meaningful as it accelerates progress in your daily farm chores. You can also visit friends’ farms to harvest crops, feed animals, and collect the resources you need to finish crafting goods on your own farm.

At the heart of the ecosystem is water. Players gather it from wells that they dig and at their friends’ wells. They use it to grow crops, which can be turned into feed for animals. Those animals can produce ingredients like milk and cheese. Animals produce fertilizer that can double your crop output. Players craft ingredients into items they can sell at the roadside stand. You can, for instance, make apple scones that you can sell for a higher price. It’s all a virtuous circle, says LeTourneau. Sometimes, when the conditions are right, players can grow giant-sized crops that win prizes.

“You have to water seeds once you plant them,” said Bagwell in an interview. “Things don’t just fall from the sky in this game.”

Animals also come to life as players care for them from babies to adults. They use the resources the animals produce to sustain or grow the farm. Planting seeds no longer takes a mouse click for each patch. Now you can hold your mouse down and wave the cursor over a section of crops, “painting” seeds into the ground using broad brush strokes. Players can also right-click in the game (for the first time in a Zynga game), allowing them to pick up and rotate objects more easily. Your corn and wheat stalks sway in the breeze. Wind chimes move and make sounds. When you expand your map into grassy fields, goats eat away at the grass until you can plant there.

“It is tactile and alive,” said Bagwell. “The world reacts to your touch.”

Once you generate some income, you can buy things at the general store to spruce up your farm. You can purchase machinery that automates production. And it’s much easier to decorate a farm with items like garden gnomes or even sprawling mansions.

Zynga has added some narrative, as well, introducing characters such as Marie, a country girl who shows players the basics. Walther Thorncroft, a retired engineer turned farmer, teaches players how to take their farms up a notch.

Cornelius is the local village grocer. He gives the player daily challenges to perform by placing orders for goods that can be crafted from what the player actually has on his or her farm. Cornelius is an interesting game mechanic that prods you to outdo the production that you accomplished the day before. The game adapts to the way you like to play.

“He’s actually looking at my farm — the things I am growing and the recipes in my kitchen,” said Bagwell. “He places orders for things that I can actually produce. In return for doing what he wants, I can get cool prizes from him.”

While the virtual characters can prompt you to take action, your real friends are the most powerful force in the game. Your farm helpers come over every day and help you instantly grow or harvest crops. You can see that work happen as the animated characters move across your farm in real time.

The net result is a simple and intuitive version of what it is like to run a farm, said LeTourneau. And that farm is not just a “game board.” You can see that it’s part of a larger landscape that includes a village community off in the distance. Your goal is to eventually get to the village (the place where the village grocer Cornelius comes from), where you can interact with neighbors even more.

“I love to play Zynga games because of the social interaction more than anything,” said Denise Lambert from Toronto, Canada. “When life gets busy and things get stressful, you can step away for a little bit to relax and socialize with people who have the same interests as you, which brings you to a happy place. I’m excited for FarmVille 2. I can’t wait to play!”

Both FarmVille and FarmVille 2 will continue to evolve over time, as both have dedicated teams. FarmVille 2 is available in 16 languages, including English, Danish, Arabic, Dutch, German, Japanese, Korean, Norwegian, Swedish, Thai, Turkish, French, Italian, Portuguese, Spanish, and traditional Chinese. Zynga says it has more than 306 million monthly active users on Facebook, Zynga.com, and other platforms. The game will go live with 30 levels. If you want to progress faster in the game, you can pay real money to purchase faster progress in growing crops, and you can also pay for decorations.

On the surface, FarmVille 2 uses the first game as its inspiration, said LeTourneau. FarmVille may have brought virtual farming to all of us, but FarmVille 2 is the real game.

“Our goal was to create an ecosystem where all these things were interconnected,” said LeTourneau. “We want it to feel like it’s next generation, and it’s always very alive.”

Here’s our image gallery of FarmVille 2: