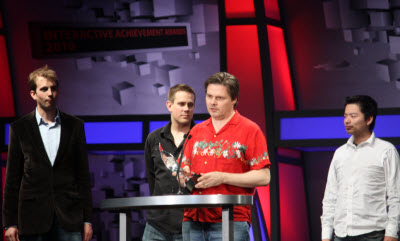 Cultural change happens slowly. Unless, of course, you’re talking about the pace at which social games are sweeping through the video game industry.

In the course of a couple of years, Facebook games have left their mark on the video game industry. Their presence is now being acknowledged at the hardcore video game industry’s event for honoring its greatest achievements, the Interactive Achievement Awards at the Dice Summit in Las Vegas.

Giving away its first-ever award for excellence in social gaming, the Academy of Interactive Arts and Sciences (which gives out the Oscars of the video game industry) awarded FarmVille the title of social game of the year. The game has more than 79 million monthly active users on Facebook, making it the biggest online game in the world. And yet it was made in a matter of weeks.

Mark Skaggs, former Electronic Arts developer who is credited as the creative director on the game, accepted the award. He acknowledged the Zynga team and venture capitalist Bing Gordon, a partner at Kleiner Perkins, for creating the game and everything behind it.

FarmVille didn’t take home the top prize of Game of the Year, which went to Uncharted 2: Among Thieves, developed by Naughty Dog and published by Sony on the PlayStation 3.