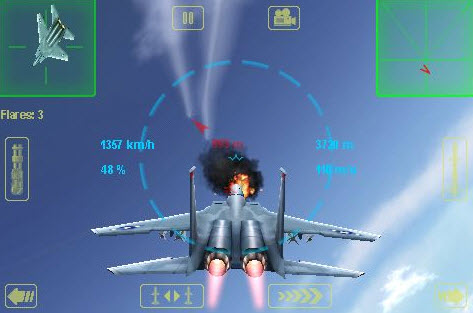 The 3-D air combat game F.A.S.T. debuted a couple of weeks ago on the iPhone and iPod Touch. It’s a very difficult game to play, but it’s been growing on me.

That’s because I’d ordinarily think it would be impossible to do this kind of high-quality 3-D graphics game on a mere mobile platform such as the iPhone. This is the beginning of the next generation of iPhone games, and so we’re taking the rare step of doing an actual review of it.

I first saw it a couple of days before its June 7th release when Shervin Pishevar, chief executive of Social Gaming Network, showed it to me on his iPhone. F.A.S.T. stands for Fleet Air Superiority Training, and the game lets you fly a modern jet fighter and shoot down bad guys with missiles or guns. Since that time, the $4.99 game has moved to the No. 1 position for paid games on the iPhone and iPod Touch.

The 3-D graphics are really vivid, much like what you’d expect from a flight simulator game on a PC. The game is full of solar flares, blinding sunlight, clouds, and cool aircraft contrails. You can still see jagged edges (a sign of primitive 3-D graphics) on the aircraft, but you don’t really notice them because the action is so fast. Pishevar said his team worked hard on the 3-D engine to display the fast-moving graphics. You wouldn’t think such graphics were possible on an iPhone with its ARM-based processor and graphics technology that is downright primitive compared to the latest PC or game console graphics.

The game relies on the accelerometer in the iPhone for its main controls. You obviously don’t have a joystick to fly an aircraft with the iPhone. But you can tilt the iPhone in various directions to steer your aircraft in 360 degrees. You can tap the corners of the screen to turn more tightly. And you can tap the icons for guns or missiles with your finger. If an enemy missile locks on your aircraft, you shake the iPhone so that your aircraft drops flares, which draw away the heat-seeking missiles on your tail.

At first, I thought the game was a great example of a second-generation iPhone game. It is so different from the games with primitive graphics and slow, methodical, turn-based game play. Then, as I played it, I found that it was too hard. Try as I might, I couldn’t hit a thing with a missile. Part of the problem is actually a good thing. The game has no tutorial and it just throws you right into the action.

As soon as you start it, it shows an animated clip of a jet evading a missile and then you choose your battle. The single player missions start with you in the midst of a dogfight with one other pilot. You have to learn on the fly, so to speak. You can tap the camera to get a third-person perspective of the battle. That’s useful when you’re trying to get away from someone on your tail or a missile tracking you. The controls are extremely responsive, although making turns could be easier.

As I flew more, the game started growing on me. I started getting better about shooting down aircraft and progressing through the exercises. There are total of 30 missions, with the difficulty increasing from novice to insane. When you first fly, you only have the choice of two planes. But you can unlock as many as 10 planes, including the F-150, F-4, F-15, F-16, Eurofighter 2000, and F-22.

In a sense, the initial difficulty may turn off a lot of players from this game. But I’m an old flight simulator fan and I suspect there are a lot of others out there. I miss this kind of game, since they really don’t do them for the PC as much anymore, and it’s always a little weird trying to fly jets with console game controls. When you’re really trying to fly the aircraft right, you look downright silly. You hold the iPhone in your hands and gesture wildly, moving your arms up and sideways or downward. If you play the game in public, it’s quite possible people around you will just start chuckling because you’re moving so fast. That’s where the F.A.S.T. name actually makes sense.

If you tire of the single player game, you can fight two-on-two or one-on-one in a Wi-Fi enabled multiplayer match. That’s when F.A.S.T. becomes more like a party game where you get a chance to destroy your friends before they destroy you. SGN promises more upgrades to the game as it adds iPhone 3.0 functions.

The difficulty of the game will turn off the newbies, but it will satisfy hardcore players who really want something challenging. This is one of those games that will frustrate you as you try over and over to nail the enemies. But it’s also a game that you’re going to stick with for quite a long time, since it brings out your determination to overcome a difficult challenge. In that respect it reminds me of a lot of games I played over and over again on the PC or the consoles until I mastered them. I have to tip my hat to Pishevar, who says the 3-D engine can be reused in other games. I don’t see that many next-generation games on the iPhone yet. But I can understand why this hit No. 1.