Final Fantasy Explorers for the Nintendo 3DS is unlike any other game in the Japanese role-playing franchise’s 29-year history. It may be unique among its relatives, but it’s certainly not one-of-a-kind: It’s a take on Monster Hunter, where you accept quests to take on giant monsters, using their choicest bits to create better gear.

And while this works, the Final Fantasy aspect feels more like a skin thrown on top, not an inherent part of this game. 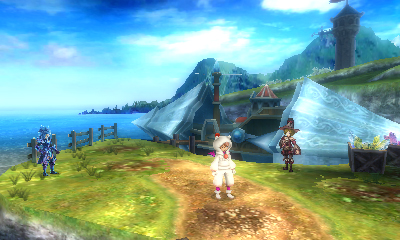 Above: That’s not the fancy armor I ordered!

Final Fantasy Explorers stands out in one manner: the Crystal Surge. This happens when you fill up the Resonance meter as you slay monsters. When this kicks in (it feels like it does at random), you hit the L and R buttons at the same time to bring up a set of special abilities. Select one, and you have a chance for it mutating one of your character’s attacks and adding a new property to it. A Black Mage could use a surge to transform a regular Fire spell into one that acquires Poison. My Ranger can watch one of his bow skills pick up an Stun property.

One of the best parts of the Final Fantasy Explorers is mixing up these souped-up abilities. You can learn these from the central crystal in town and enable it if your class can use it (a Black Mage my mix up some White Mage abilities, but you can’t use Bow abilities when wielding an Sword). You can rename these, too, and I spent a stupid amount of time just making new names for these in-between monster-slaying runs.

You can change Jobs — your classes for those few Final Fantasy fans reading this — any time you come back to town as well, and you can use the leavings from your slain foes to create new gear. You can even use some of the drops to enhance your armor and weapons.

You can also fight as captured Eidolons or even Final Fantasy characters such as Cloud, Squall, and Lightning. You first equip their Magicite, which you gain from Ifrit and its ilk by catching them in battle (you get the Magicite for characters like Lightning from people in town), and when the Trance meter fills up, you can use the Eidolons’ abilities — or even become the series’ biggest heroes.

The classic Job system brings the familiar and most of the Final Fantasy flavor to Explorers. You start as a Freelancer, open up a few more classes like Black Mage and Ranger after a few quests, and add more Jobs as you finish more advanced outings. It’s comforting to see a Time Mage and see abilities such as Haste, Slow, and Gravity — you know what they’re going to do, so it helps you plan out how you want to take on your challenges.

I appreciate being able to change Jobs whenever I come back to town. This lets you focus on the Jobs you enjoy, and since you can mix some abilities from others classes around, it also enables you to build characters in ways others may not. Japanese role-playing games aren’t always so open to such customization, and it’s nice to see these options here. 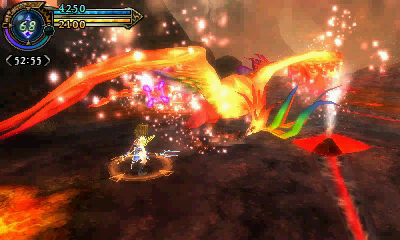 Above: This guy gives new meaning to “Big Bird.”

I appreciate that fans of Monster Hunter enjoy the Capcom game’s approach to slaying beasties. But I prefer Final Fantasy Explorers — it shows the location of your quarry on the map, and when the monster is wounded, it doesn’t run away and disappear to other locations, as it does in Monster Hunter.

This is helpful, because you can’t reach every location on the map with the fast-travel airship. So not needing to wastefully explore one region after the other saves time, allowing you to focus on killing critters and customizing your abilities instead of playing hide-and-go-seek.

You can also revive when you die, sacrificing 5 minutes of quest time. I needed to a few times when fighting the great Eidolons of Final Fantasy, such as Ifrit and Shiva. I found that had plenty of time left over after finishing one of these hunts, so knowing I could revive once or twice and still have plenty of time to accomplish my goal was a great relief when I found myself low on health, magic, and curing items.

You can play with other people online or in local co-op over a Wi-Fi network. (In my experience, this was slow, but to be fair, my office’s network is also pretty pokey. It may not be the game’s fault.) And it’s fun to do so! But I got more enjoyment out of building a team of monsters to bring one my adventures.

When you kill foes, they can sometimes drop an atmalith. These are essentially the monster’s spirit, and you can bring them to the Monster Lab. For a fee, you can add it to the roster and bring it on your journeys. The monsters use their abilities in combat to help you, and they revive after a few minutes following their deaths. It’s also just cool to go out to explore with iconic Final Fantasy monsters at your side.

3DS isn’t best platform for this 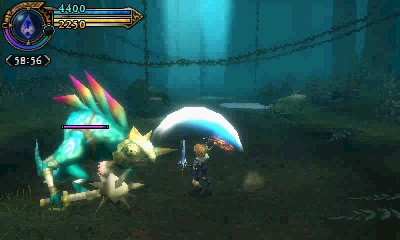 Above: Take that, Lizard brain!

My hands just aren’t well suited to the New 3DS XL. I found using the L and R buttons to bring up different sets of abilities to be a bit tiresome after a while — and a bit painful after playing for an hour or longer.

I also didn’t care for bending down and looking at the screen. And I don’t know about you, but my right hand tends to fall asleep after extended periods of holding a 3DS. Putting this game on the 3DS, though, feels more like Nintendo is trying to reach its largest audience than doing what is best for the gameplay — and those playing it. And with many more people owning the 3DS than the Wii U, I get that. But this would be more enjoyable to play with a console controller instead of on a handheld.

I’ve been playing role-playing games for three decades. I know that the process of “get quest, explore, kill stuff, and go back to town” can get boring, even if the game is exciting and engaging.

But Final Fantasy Explorers has you redo some quests. It has logic behind it — after beating some of the early Eidolons, you have to fight them again to capture them, since that part comes after your initial encounters. But that’s not good game design. Don’t make me redo the same fights — just introduce the capture mechanic earlier.

And the quest structure — killing monsters, collecting items, crafting new abilities and gear — does get old after a while. I imagine groups of friends who play this together will enjoy Final Fantasy Explorers despite this and push through the tedium I found, eating pizza and other fun food and drink pop or beer. They’ll laugh and relive their close calls. But when playing solo, it gets boring after a while.

Most important to me, even with classes and monsters from one of gaming’s most iconic series, Explorers doesn’t feel like Final Fantasy. Other spinoffs in the series do — Final Fantasy Tactics feels more like the franchise to me than even some of the mainline games. Explorers doesn’t have the grand storyline, the challenging boss battles, and the glorious art. It has the trappings of the series, but not its soul — and I missed these.

Final Fantasy Explorers is a kinder, gentler take on Monster Hunter, and it’s going to appeal to those who want to like that series — but don’t care for its opaqueness or its hardcore gamer leanings. Final Fantasy fans are going to love the fan service, too.

But some life-long players of the franchise may not feel like Explorers has enough Final Fantasy for them. It has a lot — and lets you customize much of it along the way — but it just doesn’t have that “magic feeling” I get when playing a Final Fantasy and knowing that game’s world is at stake.

At least it has Black Mages.

Final Fantasy Explorers is out January 26 for the Nintendo 3DS. The publisher gave GamesBeat a Collector’s Edition of the game, along with a standard edition, for the purposes of this review.