Final Fantasy is one of my favorite video game franchises, so I was a little anxious when I heard that the Final Fantasy VII Remake would be revamping its traditional turn-based combat into a system with a real-time action focus.

For a traditional Japanese role-playing game fan like me, this sounded like sacrilege. But now that I’ve had a chance to play Final Fantasy VII Remake at the Electronic Entertainment Expo (E3) going on this week in Los Angeles, I’m onboard with this new combat system.

Final Fantasy VII Remake comes out for PlayStation 4 on March 3, 2020. The “remake” part has always worried me. While I love old games, I don’t have a problem with updating a classic. I love how gorgeous last year’s Shadow of the Colossus remake looks.

So much of Final Fantasy VII’s charm comes with the context of the time it was made. I love its blocky polygonal graphics. The prerendered backgrounds are iconic. And of course, the turn-based combat is Final Fantasy staple from the 1990s.

Twenty years ago, Final Fantasy used the ATB (active time battle) system. It’s a traditional turn-based affair, but your character can’t execute an action until their ATB bar fills. In other words, turns aren’t in a set order. Some characters are “faster” than others and have their ATB bars fill quicker.

I worried that Final Fantasy VII Remake would abandon this for something more hack-‘n’-slashy. It hasn’t (as we saw Monday night during Square Enix’s E3 presentation). You still press a button to perform basic attacks. For Cloud, you swing a sword, When you’re Barret, you fire from your machine gun arm. 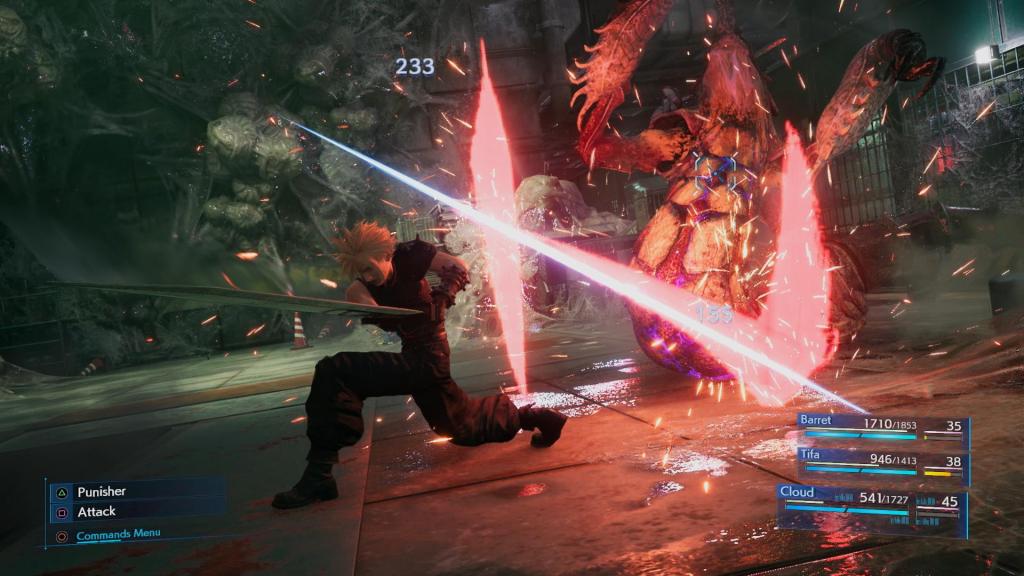 While these basic attacks deal damage, they have a more important role: They fill your ATB bar. This isn’t the same thing as what’s in the original, but it takes inspiration from the classic ATB system. Each character’s ATB bar accumulates slowly over time, but it fills up much faster by performing these basic attacks.

Each character has two ATB segments. When one is full, you can press the X button to pause the battle and select a special action. These include Skill attacks that deal more damage than a normal hit. They can also do things like hit multiple enemies. You also use an ATB segment to cast a magic spell like Fire or Cure or to use an item like a potion.

This is a fantastic system. You have some of the more traditional action-RPG mechanics. You may dodge or block enemy attacks, so your positioning matters in a way it never would in a stationary turn-based battle.

The ATB segments are a valuable resource, and you must consider your approach to managing them. You may want to keep one banked in case you get low on health and need a potion. But sometimes you can stagger an enemy, putting them in a position where they take extra damage. You may throw caution to the wind here and spend all of the ATB you can to maximize your damage.

The real-time nature of the combat makes fights more cinematic than they ever were in the original game. My demo started with a few short fights against regular enemies, mostly grunts, before battling the Guard Scorpion. This robot is as the first boss in the original Final Fantasy VII.

In the old game, it’s pretty simple fight. In the remake, this boss is a long, epic battle with multiple stages. I had to carefully choose when it was safe to close in as Cloud to swing my sword, be smart about using my ATB segments to heal, and even hide behind debris to avoid its giant laser attacks.

I’ve seen a lot of action-RPG combat systems. This is one of the best.