Final Fantasy XIV became my obsession in 2021, and that was during a “slow” time for the game, at least in terms of major new content. I joined the MMO during the end of its Shadowbringers expansion. However, it never felt like a game in a lull. It was as alive and content-filled as any online title I ever played. Playing FFXIV became my favorite thing to do in 2021.

Then Endwalker comes and somehow makes it all even better.

This is Final Fantasy XIV’s fourth major expansion. Each has built off of the strong foundation Square Enix created with 2013’s A Realm Reborn, which remade the abysmal, original version of Final Fantasy XIV into something respectable. Now Endwalker brings many of the story points started with A Realm Reborn — and some from even the original version of FFXIV — and gives players a satisfying conclusion while promising more adventures for the future.

Each expansion has strengthened Final Fantasy XIV’s greatness. Now Endwalker cements it as one of the greatest MMOs of all time.

Endwalker adds a lot. Foremost, players have a new story campaign. This continues the main narrative of the game and takes you through new zones, dungeons, bosses, and more. Doing this story will get you to the new level cap at 90, unlocking new abilities for your job class along the way.

I don’t want to spoil anything about the story, but it’s a worthy successor to Shadowbringers’ masterful tale. It is a bit less focused. Endwalker has a lot more loose ends to tie up. If there’s a knock against the story, it’s that it does feel like the final act of a larger narrative and less like a self-contained tale with threads that connect to the larger plot, as expansions like Shadowbringers and Heavensward were. But if you’ve played through all of those other expansions, it’s so exciting to see all of these different characters and story branches come together for something of a grand finale. 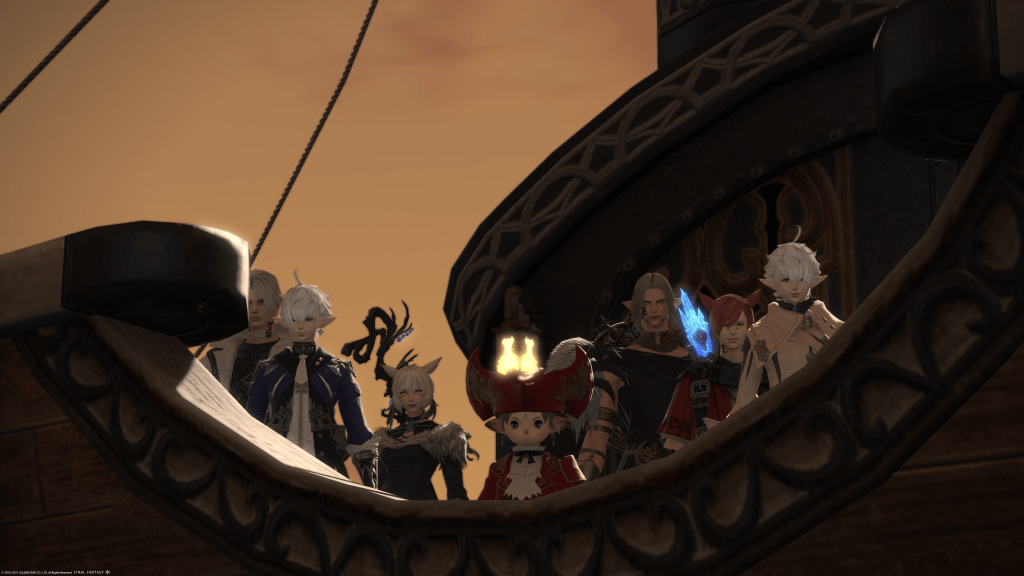 Above: We’re going on an adventure!

The new zones are the overall best bunch we’ve ever gotten from an expansion. Each is magnificent and unique. One has you exploring an underground conservation area, complete with fabricated sky and sun. Another is like a Final Fantasy spin on India, which stands out from the overplayed medieval or far eastern aesthetics that many fantasy games often rely on. And if you’ve been paying any attention to Endwalker’s marketing, you know that you go to the moon. Whelp, turns out that the moon is a super cool place to go to.

The campaign is as long and engaging as any single-player RPG. Heck, it’s better than most of them. It’s not often that you hear anyone say that an MMO is worth playing just for its story. Final Fantasy XIV is the rare exception, and rewards players who have committed the time to experience the MMO’s plot up to this point.

Endwalker also adds two new job classes. Sage is a healer with something of a futuristic tech aesthetic. They use shields that absorb damage just as often as they heal allies directly. They can also restore some health to a select target as they damage enemies.

Reaper is a new melee damage job. They wield giant scythes and have a ton of mobility. They can dash and teleport around an arena, making it easier to dodge enemy attacks. They also have a dark shadow that can manifest itself or even possess the player for a boost in damage and/or speed.

Both new jobs are stylish and fun to play. Even if you don’t see yourself using one of them as your primary job, they’re worth leveling up. In Final Fantasy XIV, a single character can learn every job. You don’t need to start a new avatar from scratch as you would in a game like World of Warcraft. This makes it easy to switch between jobs or to start leveling up a new one. Since Reaper and Sage start at level 70, any veteran FFXIV player should give them a spin. 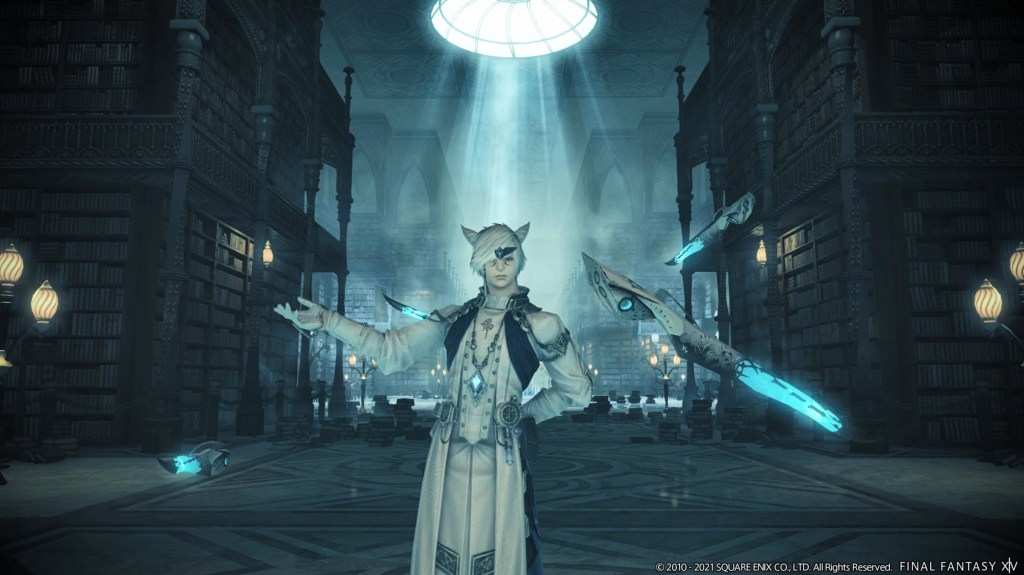 Above: The Sage in Endwalker.

A lot of Endwalker is fantastic, but nothing is as good as the soundtrack. Composer Masayoshi Soken created a score with beautiful, haunting new arrangements and thoughtful callbacks to earlier songs from Final Fantasy XIV’s life. The soundtrack turns emotional moments into the kind of borderline-traumatic set pieces that you can’t stop thinking about. There are multiple songs that I’ve been playing on loop since beating Endwalker’s campaign.

Soken composed much of this score while battling cancer during a worldwide pandemic. The fact that he was able to create music this incredible under such extraordinary circumstances is one of the greatest creative efforts in gaming history.

It’s incredible just how much Endwalker offers. The main story campaign is already a lot. You also get a ton of sidequests, including one for each job role — like healer, tank, or magical damage dealer — that sends you back to areas from previous expansions.

We’ve also gotten the first Extreme Trial fights, which offers some of the best gear your character can get if you and seven others can manage to take down harder versions of the bosses from the main story. This is the first time I did Extremes, and they’re a blast. Final Fantasy XIV makes it easy to find a group of players, and these fights offer a great challenge. We also got the first wing of this expansion’s 8-man raid series, Pandemonium, which offers four more amazing boss fights and its own story content.

Aside from the two new jobs, Endwalker also makes adjustments — some big, some small — to Final Fantasy XIV’s existing classes. My beloved Red Mage is more satisfying to play than ever thanks to some smart balancing changes and new abilities. I’m excited to reach the new level cap with every single job in the game. 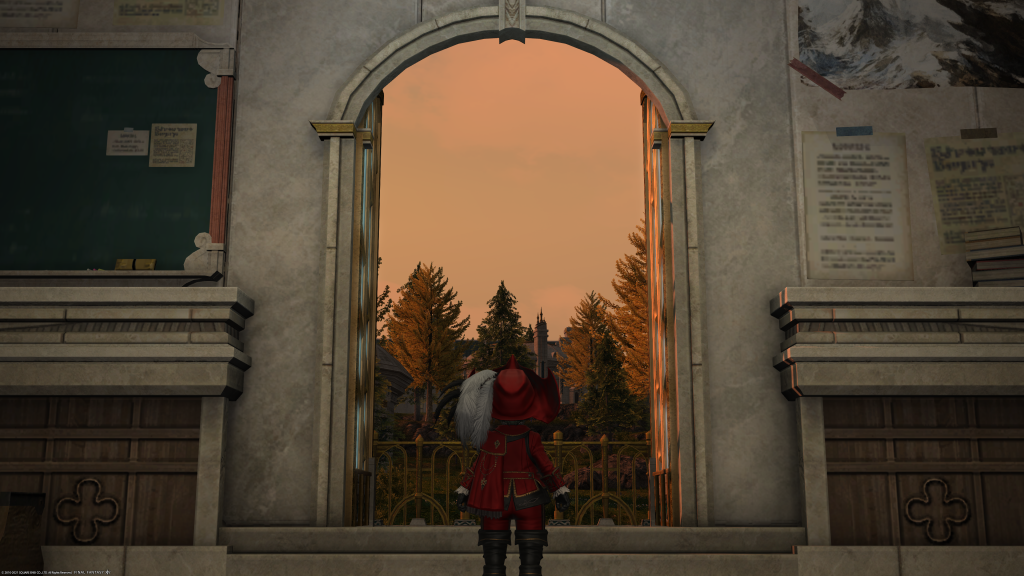 Above: Endwalkers offers some amazing places to explore and adventure in.

One end, one beginning

Final Fantasy XIV became one of my favorite games of all time in 2021. Endwalker makes me sure that I’m going to keep playing throughout all of 2022.

Final Fantasy XIV: Endwalker is out now for PlayStation 5, PlayStation 4, and PC. Square Enix provided a code for this review.