Square Enix knows that Final Fantasy isn’t as popular as it used to be. But the developer hopes it can fix the franchise’s reputation with Final Fantasy XV.

Out on September 30 for PlayStation 4 and Xbox One, Final Fantasy XV is the latest entry in the long-running Japanese role-playing game series. It follows the story of Noctis, a prince who sets out on a globe-trotting journey while all hell breaks loose in his homeland. Hardcore fans following FFXV’s development have known about Noctis for over a decade. Square Enix initially revealed the game as Final Fantasy Versus XIII back in 2006. It didn’t resurface in a big way until 2013, when the company rebranded it as Final Fantasy XV.

Despite selling over 110 million copies to date, the series isn’t as dominant as it was during the PlayStation and PlayStation 2 console generations. FFXV director Hajime Tabata is well aware of this decline, especially among gamers in Japan who’d rather play on their phones than on consoles.

“Once we entered this [high-definition] age, [the franchise] sort of stopped growing. We haven’t really seen major changes to it,” said Tabata (via translator) in a press conference in March. “I’m also aware of the many people who comment that Final Fantasy has reached its peak — it’s sort of over-the-hill. Once we entered this HD phase of gaming, there are many Western [intellectual properties] that have become the torch-bearers [for RPGs]. We can’t necessarily mimic a Western approach to creating and developing a Final Fantasy.

“However, we can learn from other Western IPs, and we’ve done a lot of research seeing how other Western IP brands have [performed] on a global scale, and what they’ve taken into their games. We decided to take some of those aspects and incorporate it into our development plan and all of our designs.” 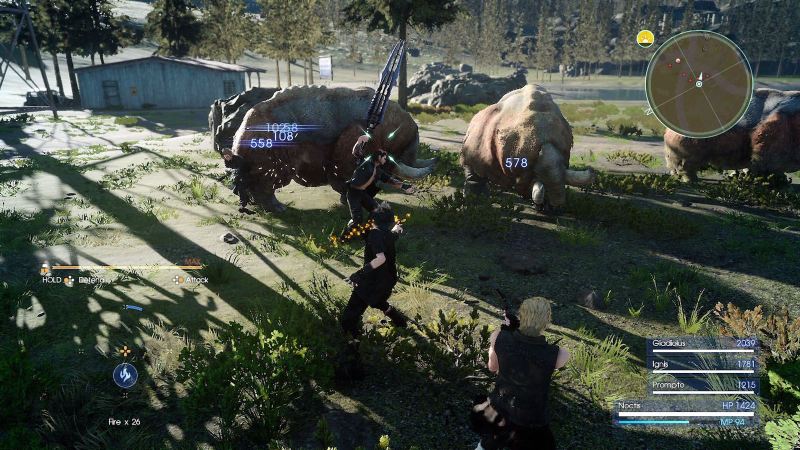 Above: Noctis has three companions who can help him in battle.

In a roundtable interview later that day, Tabata expanded on his comments.

“In terms of Western influence, there’s no real specific game in particular,” he said. “It’s more of the triple-A Western approach: where they release their games, the size of the markets they’re going after, their marketing campaigns, how they go about creating and planning those campaigns, localization support — all of that. That’s really what I’ve been influenced by.”

But a few recent RPGs did stand out in Tabata’s mind. He mentioned CD Projekt Red’s The Witcher 3 (in terms of “how they did things with their release and their campaign”) and the small window of time between the announcement and release of Bethesda’s Fallout 4. That five-month turnaround left “a big impression” on him, making him feel like they need to “cut down on this lag from announcement to release ourselves.”

Some of that Western influence is also evident in Final Fantasy XV. While it isn’t an open-world game like The Witcher 3 or Fallout 4, it does have much bigger areas to explore compared to previous Final Fantasies. It’s a road trip story: You move through an imaginative world by driving a fancy black car, and you can pull over and get out of it whenever you want. The game will also have — for the first time in the series — different difficulty options for combat. 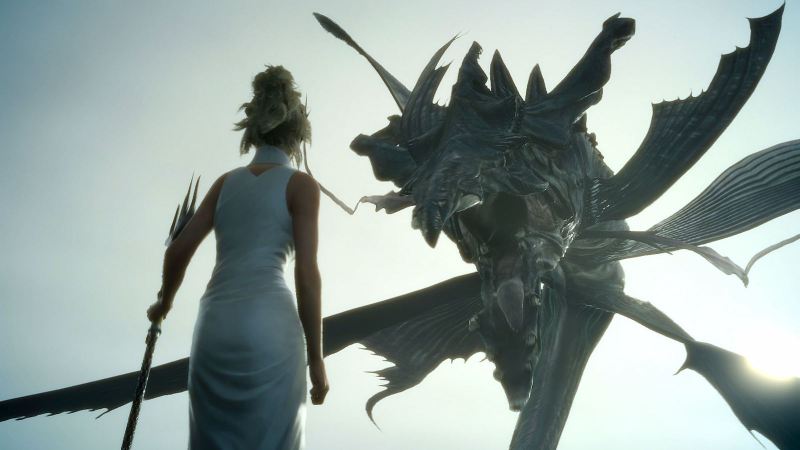 In total, the Japan-based studio has 300 employees. The number of people on the game itself — not including the large assortment of external companies helping Square Enix to create assets — is comparable to teams from past entries. Some of them, including artists and engineers, came from Western studios that make triple-A games.

“Even though we have the same number of staff as [the team who worked on Final Fantasy XIII], the internal structure of our teams and the various responsibilities or tasks that our various staff members hold are completely different,” Tabata said. “It’s a completely different type of structure and way of doing things.”

Unlike previous years, this group of developers have a much different attitude when it comes to making Final Fantasy games. They’re more open to receiving feedback and using it to improve players’ experiences.

“On past games, I think our staff typically thought that a numbered FF is a very special game and brand. And that, because they were working on it, they were special themselves,” said Tabata. “We got rid of that idea completely with XV. We don’t think that way at all. And I think that’s why we’re doing our best and working as hard as we can to get everything done … and accept all that feedback from our fans.” 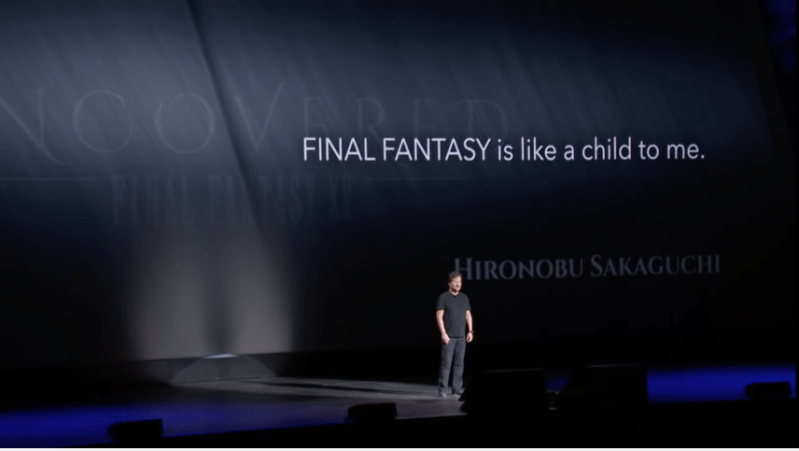 Above: Hironobu Sakaguchi at the Uncovered event.

Tabata and his team know how much work they have to do to make sure the game pleases both old fans and new players. That much was clear during Square Enix’s live “Uncovered” event in Los Angeles. The developer smartly brought in three people who were instrumental in making Final Fantasy a successful franchise in the first place: original creator Hironobu Sakaguchi (who left Square Enix in 2004), composer Nobuo Uematsu, and artist Yoshitaka Amano.

For older players like myself, their words and appearances were a symbolic gesture — as if they were reassuring fans that Final Fantasy XV is in good hands.

Through translated text on a large screen, Sakaguchi told an audience of 6,000 people at the Shrine Auditorium (and many more watching the show online) about a conversation he had with Tabata. The game director told him that he wanted to bring the series back to its “challenger roots.”

“I felt assured by his words, because the Final Fantasy I remember was constantly seeking new challenges and never sitting comfortably in any given place,” Sakaguchi said.