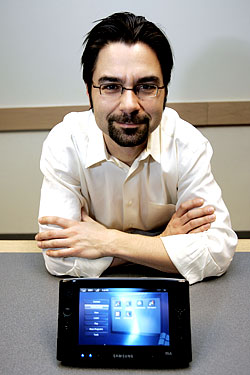 Otto Berkes, one of the primary founders of the original Xbox, has left Microsoft after 18 years at the company.

His departure marks the end of an era at Microsoft. The company continues to struggle to create new businesses that were as successful as the Xbox, which is now generating billions of dollars in revenue for Microsoft.

Berkes resigned yesterday. He started in 1993 at Microsoft as the lead programmer on the Windows graphics team. In 1998, he teamed up with Microsoft tech evangelist Ted Hase to create a Windows gaming machine. They were joined by Seamus Blackley and Kevin Bachus. All have since departed, as have other early advocates of the Xbox such as Ed Fries, Cameron Ferroni, J Allard and Robbie Bach. Berkes’ story was one of many I wrote about in my first book, Opening the Xbox.

Berkes and Hase left the Xbox team relatively early, in 2000, before the machine’s launch in 2001, because they believed strongly in extending gaming on the Windows platform. While the Xbox began life as a PC, it eventually morphed into a pure video game console. Berkes and Hase dropped out before Allard came to the project. As Berkes looked back, he recalled that he left Xbox because it had changed from the original plan in ways he couldn’t support, and he felt he had to step aside.

In subsequent years, Berkes helped create Microsoft’s original line of slate computers, the Ultra Mobile PCs. That was years before Apple came out with the iPad. Back then, the trade-offs between decent performance, small size and battery life were huge. Berkes also worked on the Microsoft Courier project, which was headed by Allard. That was Microsoft’s attempt to match the iPad and go further with a dual-screen touchscreen device.

The Seattle Times said Berkes is leaving the company for another one in the Seattle area.

“It’s a good time for me to make a transition to a different set of challenges and something new and fresh,” he told the newspaper.

Update: Berkes wrote back to us and said he is excited about joining a new venture and will say more in a couple of weeks.

Regarding Microsoft, he said, “Over 18 years, I wrote code and I managed programmers. I came up with patents, and I did billg (Bill Gates) reviews. I drove prototyping efforts (some of which took off and some that that didn’t). I wrote white papers, and got into heated arguments in meetings (although neither Bill nor Steve ever yelled at me).  I asked the questions that I felt mattered. I had the chance to mentor people and watch them go on to do amazing things both inside and outside Microsoft. I watched some people lose political battles and others win some, and my whiteboard was never empty. I worked on software, hardware, PCs, devices, and servers, and through it all, I always believed in what I was working on and in the people I worked with. Like any great journey, mine is hard to summarize. I will always remember my time at Microsoft with both pride and passion.”

On the Xbox, Berkes said, “Xbox got its start because a small group of friends and I saw an opportunity to leverage DirectX and Windows to build a DirectX box and put it in the living room – the “X-box”.  We had different skills and different perspectives but believed in the vision and the opportunity. Little can compare to the pace of the progress, buy-in, and excitement of those critical early days. Xbox may not be exactly the product we originally envisioned, but no one can argue with the power of the brand, and the robustness of core platform concepts that have withstood the test of time.  None of us imagined the scale and reach that Xbox would achieve.”