PlayRaven announced today that it has released its Robocide free-to-play mobile game today as part of an effort to expand the genres of the PC to mobile devices. 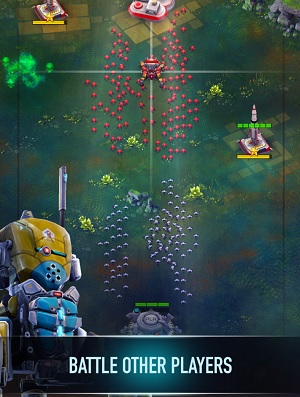 The Helsinki-based startup has created a “micro real-time strategy” (RTS) game. In doing so, it is trying to take a genre of games that have millions of fans on the PC and translate it to a touchscreen experience on smartphones and tablets. This is the latest strategic twist that a mobile game startup can pursue in the $30 billion mobile gaming market.

Based on the trailer below, it looks like this game has some pretty cool, fast-and-furious action. Robocide is available now worldwide on iPhone and iPad devices, and it has a companion app for Apple Watches. It was created by a team that came from established console companies such as Remedy and Rockstar, as well as mobile game companies such as Supercell. This is the first of three original games that PlayRaven hopes to launch in 2016.

In the title, players traverse the galaxy with an army of robots at their command. In a bid to save humanity, players use the robots to fight off rival robot invasions. It has intuitive one-finger controls that let you command swarms of robots across battlefields, planets, and multiplayer arenas. The game features collectible, upgradable Titans, or heroic robots with unique abilities. You have to harvest resources, customize a fleet, destroy evil robots, and take back the galaxy.

“2016 is going to be a huge year of releases for us, and we’re excited to kick it off with Robocide,” said Lasse Seppänen, cofounder and CEO at PlayRaven, in a statement. “Our mission is to bring fresh new entertainment to the App Store, and Robocide fits the bill perfectly. We look forward to seeing how our fans and new players dive into the experience.”

The studio was founded in 2013, and it recently raised $4.1 million from Northzone, Creandum, and London Venture Partners. To date, the company has raised $7.5 million.