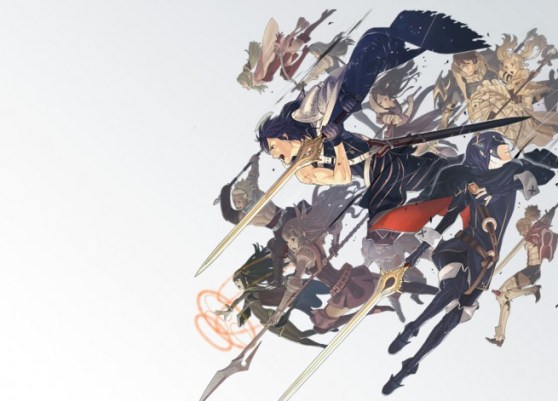 Whether you’re new to the Fire Emblem series or just need a refresher (it’s been several years since the last game and nearly a decade since the last handheld iteration), GamesBeat’s spoiler-free starter guide should help you hit the ground running when Awakening releases for the Nintendo 3DS on February 4.

To die or not to die

Awakening’s Casual Mode enables new players (or possibly those who become a little too emotionally attached to their virtual soldiers) to forgo the franchise’s iconic permadeath and allow defeated characters to return after the battle in which they were injured.

For those seeking the authentic Fire Emblem experience, you can choose Classic Mode to ensure that any character who gets caught slippin’ is dead for good. Classic also prevents you from loading previous save games, so once you make a bad decision in-game, there’s no going back.

Note that Classic or Casual Mode are not difficulty settings, so you can still choose Normal, Hard, and eventually Lunatic regardless of the mode you select. 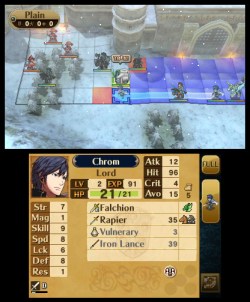 Every Fire Emblem game starts you off with some badass character that seems to swat away enemies like flies, and Awakening is no different. The problem is, those characters are usually advanced classes (as is the case with Frederick in Awakening), so while they may tank and attack like beasts, they’ll also eat up a ton of experience that could be going to your other, less-powerful characters.

If you let Frederick, for example, tear through the early missions, you’ll find that your party as a whole will be woefully overwhelmed by enemies later on. If you do bring Frederick, you may want to use him strictly as a meatshield. There will be instances where you can’t reach an enemy without being attacked first, often by multiple opponents, so you can send Frederick in first to take one for the team and probably thin the herd just with counterattacks alone.

Enemies will target the squishies first

So you’ve got a ton of characters near an enemy and figure there’s no way he’s going to go running into the middle of them just to bitch-slap your healer, right? Wrong. The A.I. is designed to take down whomever is easiest to kill, starting with your armorless healers. Keep them out of range at all times.

Skirmishes are optional battles that appear on the world map. You’ll see an enemy just standing there, waiting for you to come over and slap it with your glove, or how ever people initiated conflicts in medieval times. Sometimes, though, you may encounter unique scenarios where two enemies will fight you at the same time. You’ll reap additional rewards (a random item and $3,000), but make sure you’re prepared.

If you enter a battle with a traveling merchant, he will appear as a nonplayable character. See that no harm comes to him, and he’ll gift you a random item (usually something good). Lastly, you can come across StreetPass or SpotPass characters engaged with the enemy. Those NPC characters will aid you in battle, but be aware that you won’t get any items they take. 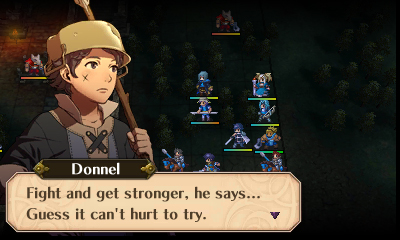 Although they may start out weak, flying units can become your greatest asset. They’re able to travel further and over terrain types that other units cannot. Just be careful that you don’t let them go too far on their own (best to pair a couple of fliers together); otherwise, they may get stranded and ganged up on.

The only real weakness airborne units have is archer enemies, but since you can view the map before you choose your squad, you’ll know what you’re up against.

Support and pairing up

Unlike many other strategy-role-playing games, the direction in which you attack an enemy and your placement on the map have no effect on combat. So you can’t deal critical back attacks or have an archer deal bonus damage by taking the high ground. Instead, you’ll need to rely on the Support* and Pair Up systems.

One character will support another anytime the two units are positioned next to each other. This automatically provides a stat boost for the lead character in battle (the one attacking or being attacked). The higher the Support Rank between the two characters, the better the stat boost will be.

Support units can also execute a Dual Strike, attacking the enemy for additional damage, or a Support Block, where they dive in front of the enemy’s attack and nullify the damage. Again, the higher the Support Rank, the better the chance you’ll gain these benefits, so make sure your characters are all nice and friendly with each other.

Pairing up works a little differently in that two characters combine to act as one unit. The lead character will gain a bonus Pair Up boost based on the partner’s class (a magic class boosts your magic, for example), as well as still being able to activate Dual Strikes and Support Blocks. Keep in mind that the character who initiates Pair Up will actually become the support unit, but you may switch roles or separate at any time (as long as you still have a turn to take).

*Support Rank is gained by fighting next to each other or pairing up. It starts at a D Rank and can go all the way up to S Rank if the two characters are marriage compatible. 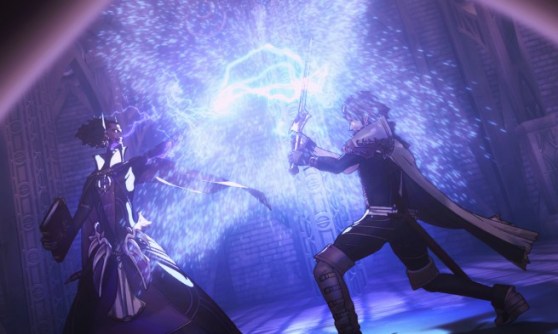 At a certain point in the game, male and female characters with an S Support Rank will marry each other. This includes Chrom, the main character, as well your own custom character, known as “My Unit.”

Once married, almost every female character has a corresponding child character that you can recruit toward the end of the game. Unfortunately, to further explain this system would spoil the story, but you can check out this incredibly robust FAQ if you’d like to know more.

Expect a downloadable-content episode titled “Infinite Divine Weapons” to be released eventually. This map has three treasure chests, each containing a random weapon, and can be replayed limitlessly. This is the most straightforward way to collect every Divine weapon in the game.

Veteran strategy-RPG players may find Awakening’s Normal difficulty to be a little too forgiving. The harder difficulties can provide a more appropriate challenge, and finishing the game on Lunatic (the highest difficulty setting) will unlock Lunatic+. The key difference here is that enemies may come equipped with insane skills unique to Lunatic-Plus. Good luck!