Fire Emblem: Fates is a safe sequel to the excellent Fire Emblem: Awakening, but Three Houses looks to make some interesting changes to Nintendo’s strategy franchise.

Fire Emblem: Three Houses comes out for the Switch on July 26. I’m playing an early copy right now. I’ve put in just over a dozen hours, and it still feels like I’ve far from seen everything the game has to offer. I’m not just talking about missions, but I mean all of the new systems and features that are appearing in a Fire Emblem game for the first time.

This is also the first Fire Emblem game to be released on a home console since 2007’s Radiant Dawn for the Wii. Of course, the Switch is both a home console and a portable device, but this represents a huge technological leap from what we’ve seen in the 3DS games. And Fire Emblem takes advantage of the Switch hardware to strengthen its presentation.

Three Houses biggest difference from past Fire Emblem games comes from its structure. You’re a professor at a military academy, and you get to choose to lead one of three houses (woot, title drop). Each house represents a different country from the game’s fantasy continent. They also have their own characters that you’ll control during battles.

Each of three has unique characters, so it’s an important decision to make. It’s also a choice that could be motivated by different priorities. You can get a sense of each character’s personality and pick one based on that, or base your decision on their starting combat abilities (one house will have more magic users, while another will feature more bow fighters).

Teaching is a big part of the game. Three Houses has an in-game calendar system, similar to the popular Persona role-playing games. Now this isn’t a day-to-day system like it is in Persona. But you’ll usually have a few important decisions to make each week. At the start of the week, you have to set a curriculum for your students. This helps molds their stats and specialties, giving a path to upgrade them to better classes and unlocking new abilities.

You can also use a day off to walk around the school. During this time, you can seek out and talk to students, take part in activities like fishing or choir lessons, and complete small side quests. Doing all this will increase your students’ motivation (making them able to learn more during your lectures), unlock new items, and strengthen your bonds with other characters. Just like in Awakening and Fates, other characters get closer the more they fight near each other and take part in these other activities. A deeper bond gives them advantages during fights. 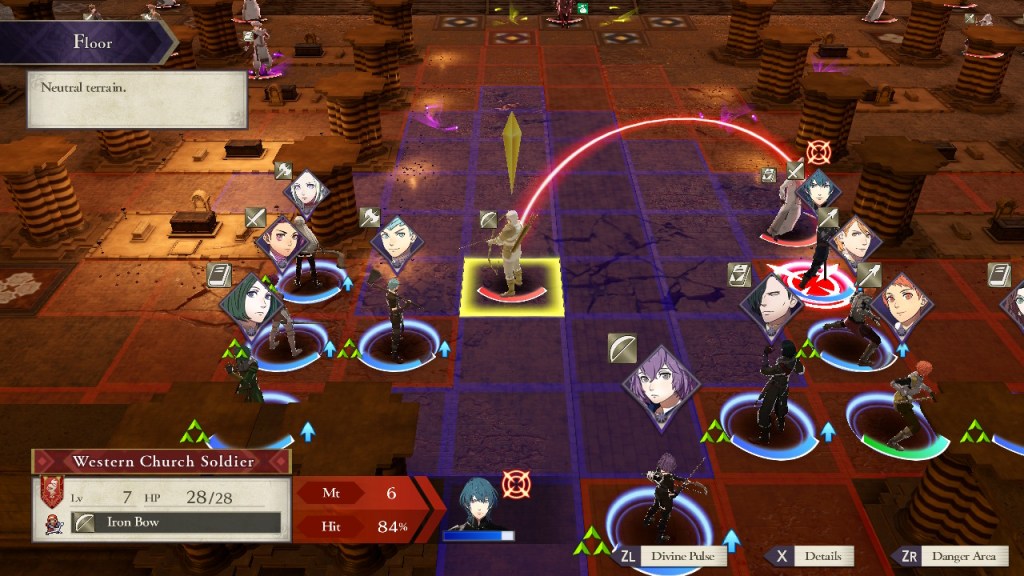 So you’re a teacher, but you still do plenty of fighting. At the end of each month, you have a special combat mission that moves the story along. You can also choose to do some extra battles during the month. Fights are similar to how they’ve always been in Fire Emblem. It’s a turn-based tactics affair. You move your characters across the grid-based map and try to clear the objective, which is usually to take out all of the enemies or just their commander.

But Three Houses makes fights a good deal more convenient. You have a rewind feature that you can use three times for each mission. This can help you undo a single mistake without forcing you have to start the battle over from scratch. This is especially nice if you’re on the receiving end of an unlucky critical strike from an enemy that kills one of your minions in a single blow. Traditionally, Fire Emblem has perma-death for its characters. You can play Three Houses without it turned on, but I prefer (as do many traditionalists) to keep perma-death on.

You also have access to special combat abilities that make your attacks stronger or give them special properties in exchange for taking away extra durability. Yes, most weapons in the game will break if you use them too often. But so far, you make enough money that it’s easy to keep all of my fighters properly stocked.

Three Houses also lets you assign battalions to your fighters. Visually, this is awesome. While the battlefield maintains the classic top-down, chess-like look while you’re moving your units around, the camera takes a more visual approach when characters begin to fight. You can see these battalions in the midst of the action, which makes these missions feel more like actual battles and less like a spat between a couple dozen people.

Your battalions give their respective characters stat bonuses and access to a special Gambit attack. You can only use this ability a limited amount, but they are strong moves that can do things like attack multiple enemies or give an ally a massive movement boost. 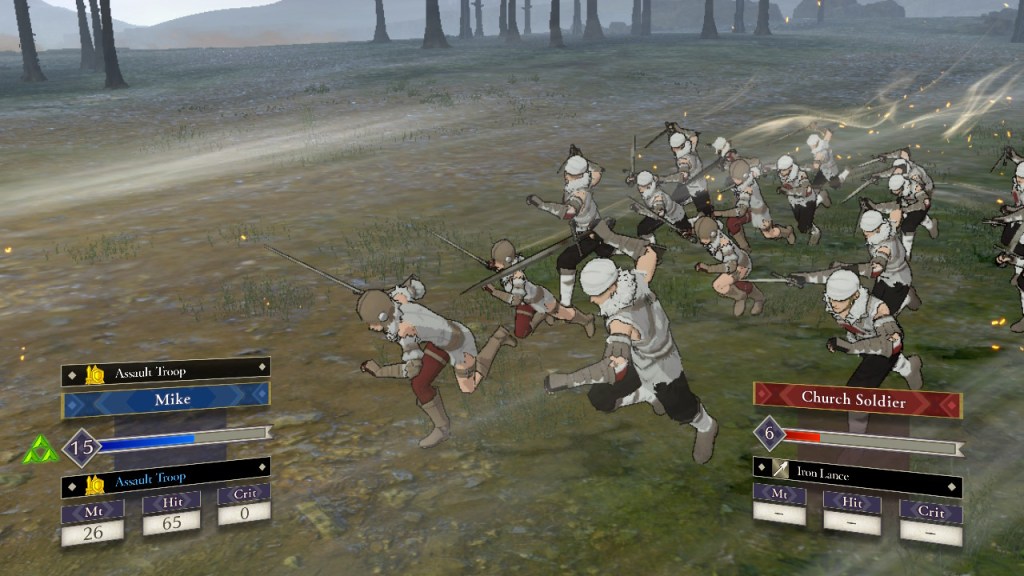 Maybe a little too convenient

All of that is great and helps make it less likely that you’ll suffer failure during a fight … which is also kind of problem. At least so far, Three Houses feels a bit too easy on the normal difficulty. All of these new features are fun on their own, but together they give too big of a safety net.

It also hurts that the missions I’ve played so far have been relatively simple. The objectives have all just been to kill everything. The maps themselves have been plain, with many of them taking place in a large open area. It’s easy to just turtle all of my units together and wait for the enemy to come to me … and promptly die.

But I still have a long way to go. I’m hopeful that the challenge will pick up. And on the way, I’m having a great time delving into all of the school-bases systems. It makes developing and strengthening all of my characters a fun and thoughtful experience.

Structurally and visually, Three Houses feels like a significant leap for the franchise.