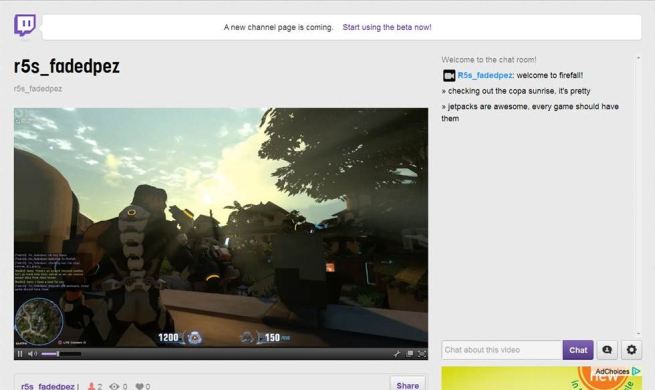 People love to watch other people play video games. Twitch, one of leaders in streaming gameplay videos, is working to make it easier for people to broadcast themselves playing their favorite games.

To that effect, Red 5 Studios announced a partnership with Twitch today that brings one-click gameplay livestreaming to the developer’s massively multiplayer online game Firefall. That means it no longer requires extra equipment or hardware to stream the action in the third-person shooter.

“Red 5 Studios is one of the most innovative independent studios in the video game industry, and we’re proud to be counted among their partners,” Twitch vice president of marketing Matthew DiPietro said in a statement. “Video broadcasting will soon be a standard, expected piece of the gaming experience with innovative companies like Red 5 making it possible by pioneering the way it’s built into games.”

Twitch previously announced a partnership with Sony Online Entertainment to add the same one-click functionality to that developer’s Planetside 2, and Activision included the feature in Call of Duty: Black Ops II in a recent update.

“We’re very excited to have Twitch broadcasting integrated into Firefall,” Red 5 Studios vice president of development James Macauley said. “By allowing players to stream from directly within the game, we’re expanding its online footprint and creating a whole new discovery mechanism. This, along with our revolutionary e-sports toolkit, provides our community with the technology they need to produce professional broadcasts of Firefall’s elite competitive gameplay.”

Thousands of people watch games on Twitch’s website. It’s a big reason why competitive titles like League of Legends surged in popularity. Other developers, like Red 5, are hoping to entice new players to try their game using Twitch as a promotional tool.

Many new games will begin shipping with livestreaming features. It makes too much sense. Developers get the exposure, Twitch gets the viewers, and gamers get to show off their skills — everybody wins.