I wasn’t sure what to expect when I stepped into a dimly lit room peppered with fake trees and road signs. Between the props were small pockets of people gathered around bright TVs. Each line looked like it was at least four or five people deep. It was insufferably hot — a sauna compared to San Francisco’s picturesque weather.

If this were any other game, I would’ve gotten the hell out of there.

But this was for Firewatch, a first-person adventure game coming to PC, Mac, and Linux later this year from developer Campo Santo. Cofounders Jake Rodkin and Sean Vanaman were two of the creative forces behind the first season of Telltale’s The Walking Dead. When they left Telltale in 2013 to form Campo Santo — why would you leave after making such a well-received game? — I knew I had to keep an eye on their new studio.

At this year’s Game Developers Conference, Campo Santo hosted a public demo day for anyone interested in playing Firewatch. Panic, a software company that is funding the developer, transformed a large loft into Firewatch’s Shoshone National Forest setting. It re-created, in stunning detail, the main character’s room from his lookout tower, complete with camping gear and a desk full of fake books.

The pageantry served as a good primer for the demo, which took players on a half-hour hike through the forest. After playing it, I met with designer Nels Anderson and graphics programmer Paolo Surricchio to find out how they created a compelling tale around one of the world’s most boring jobs. 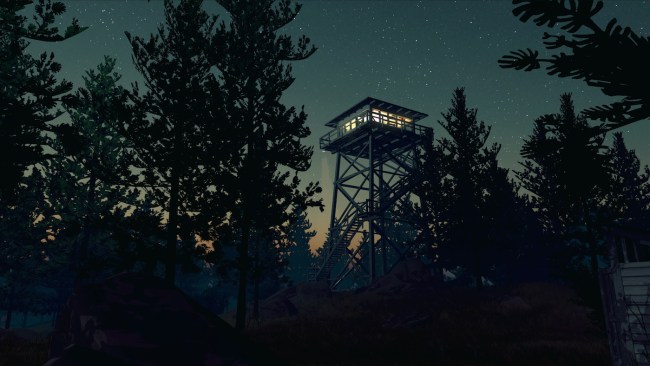 Above: Henry’s Fortress of Solitude.

‘What if you could talk back?’

Firewatch takes place in Wyoming in 1989, one year after a rash of wildfires devastated Yellowstone National Park. To prevent this from happening again, the federal government started hiring a bunch of people to fill the fire lookout towers.

One of the newest recruits is your character, Henry (voiced by Mad Men actor Rich Sommer). Henry is a middle-aged man from Colorado who’s just about to begin his watch in Shoshone National Forest. He has a lot of personal baggage — his marriage is crumbling, and he recently ran into some trouble with the cops — and he thinks the job will give him some much needed tranquility.

If his first day is any indication, he probably won’t get it. While climbing down a small cliff, his rope snaps and he plummets to the ground.

Henry’s OK, but he still has to deal with drunk teenagers setting off fireworks near the lake. The only person he can vent his frustrations to is his supervisor, Delilah (played by Cissy Jones), who’s miles away in another tower. They talk to each other via radio. Their conversations are a refreshing twist on the audio diary trope that many games tend to use. The difference here is that you’re not listening to a dead person; you can contact Delilah whenever you come across an interesting item or scene in the woods. In a nod to Telltale’s games, you can choose your response from a list of different options.

Finding a situation where only two people can talk to each other wasn’t easy. Campo Santo needed a setting that could explain why its characters are cut off from the rest of the world.

“The high level notion was: Often in games, there’s someone talking to you over the radio. But what if you could talk back?” said Anderson. “That’s cool, but in what situations does that actually make sense — that are not like a crazy underwater Objectivist city or a space station or whatever? … Growing up in Wyoming, Sean and I have seen these towers. That is a scenario where someone would reasonably be out isolated by themselves.”

Listening to Henry and Delilah was oddly weird and personal. Even though I could move Henry around (and see his arms and legs), I didn’t feel like I was Henry. I felt more like an invisible third-party eavesdropping on their lives — that’s how genuine and intimate their conversations felt.

At first, they’re playful: Henry is pretty new to all this, so every concern he brings up is met with a ball-busting jab by the much more experienced Delilah. But toward the end of the demo, their conversations turn a little more serious as they slowly open up to each other. 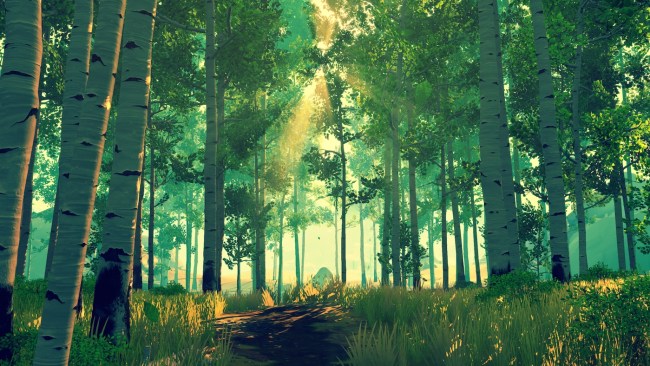 Above: Firewatch has other colors besides orange and red.

Firewatch doesn’t stray too far from what lookouts do in real life. For reference, the developers read a memoir called Fire Season: Field Notes from a Wilderness Lookout by Philip Connors, a former journalist who spends every summer working at a tower in New Mexico. They also interviewed retired lookouts from Canada who were more than happy to talk about their experiences.

“One of the things that they stressed over and over is that it’s a really, really, really goddamn boring job,” said Anderson. “What you often spend most of your time doing is [trying] not to lose your mind from boredom being out in the woods.”

When you’re out in the middle of nowhere, especially in the tower at night, you don’t have too many ways of entertaining yourself. One lady told them that when the day was over, everybody hopped on the radio and chatted all night long.

Surricchio said they got a taste of that lonely experience during a camping trip to Yosemite last year. During their stay, they visited an old lookout tower. While other tourists took pictures, they thoroughly looked through the drawers and marveled at the old books and training manuals. When a group of them sat outside to see the mountains and trees, it was so quiet that the only thing they could hear was the wind.

“Literally, we just LARP’d our game in the woods,” said Anderson. 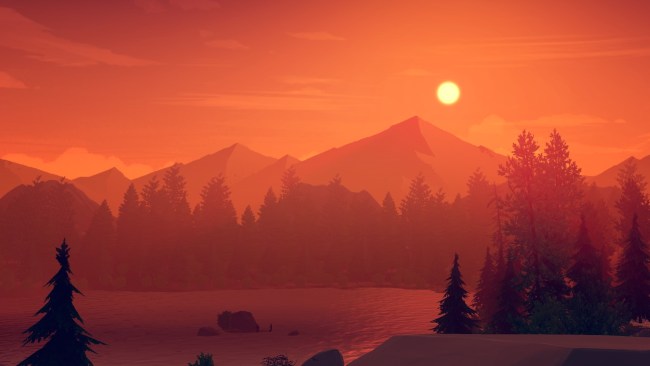 Above: Don’t expect to see Bigfoot walking around.

A mystery grounded in reality

If the developers stuck to what lookouts actually do, Firewatch would’ve been a boring game. They needed something to pull Henry out of his tower … and not surprisingly, the demo only hints at what that “something” is. At the end, Henry finds out that someone vandalized his tower and threw his typewriter out the window. Was it the work of the vengeful teenagers? The stranger he ran into earlier? Someone else?

I’m not sure why, but I kept expecting to see a big, perhaps supernatural, twist. I thought certain objects (like a torn-up tree with huge claw marks) were leading in that direction, but that doesn’t seem to be the case.

At least I solved the mystery of how Firewatch actually plays. The demo was a brief but meaty glimpse into Henry’s and Delilah’s story. And it was enough to see that Firewatch already has some of the elements that made The Walking Dead so great: an intriguing world, strong characters, and superb acting.