The iPad 3 won’t be officially unveiled before March 7, but an independent developer has already posted images that simulate how the rumored Retina display resolution would improve the visuals of his latest game.

Former EA-staffer Kevin Ng is operating UK-based studio Pixels on Toast. The graphics in his platform game Food Run are created using vectors rather than bitmaps, so the visuals automatically take advantage of higher screen resolution. Ng captured screenshots running at the alleged iPad 3 resolution of 2048×1536 pixels and compared them side-by-side with a 1024×768 version representing iPad and iPad 2 displays.

The difference is quite striking, with “a crazy amount of detail” for the iPad 3 version added, as Ng puts it. He emphasized the results by zooming in on a small portion of the whole screenshot: “It’s worth bearing in mind that the advantage in real life at practical viewing distances would be somewhat less.”

But one has to be impressed by how much crisper the rather simple graphics of Food Run appear by using four times as many pixels in total. Now imagine what all those extra dots would do to games with more detailed visuals (… I can almost smell the Infinity Blade 3 announcement). 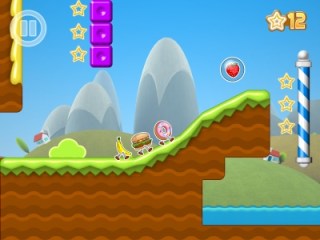 Ng is pointing out the challenges for game developers if the iPad 3 would indeed crank up the display resolution to 2048×1536 pixels: “Four times as many pixels means four times as much video memory, and much larger assets. Bearing in mind that the 20MB mobile network download size for apps is already claustrophobia inducing, supporting Retina on iPad 3 whilst respecting the [size] limit would be very hard.” He emphasizes that Apple would need to upgrade the graphics chip for a Retina display iPad significantly.

This sentiment is echoed by several other iOS game developers that were questioned by website PocketGamet.biz. Rising production costs due to increasing art budgets and a further fragmentation of the iOS market are common concerns.

Even bigger companies seem cautious: “That sounds awesome from a user experience but a bit scary from a developer perspective as the art impact is quite substantial,” says PopCap’s global mobile business developer director Andrew Stein, “iPad 3 will need bumps in processor speed and lots more memory to ensure that the real-world performance of an iPad 3 app is comparable to the same ‘non-Retina’ game on an iPad 2.”

We will have to wait until Thursday to learn whether the iPad 3 will be all sunshine and roses for gamers and app developers. Are you eager to upgrade, content with playing on a non-Retina iPad a little longer — or instead tempted by Sony’s new PlayStation Vita portable gaming system?