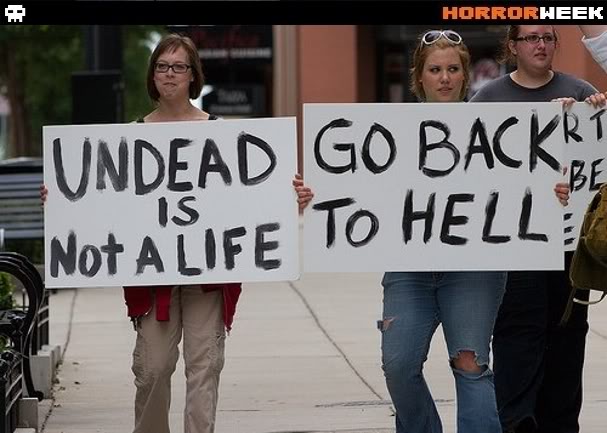 That one word evokes an intangible mess of villainy, grotesquery, and none-too-subtle cliché. Sure, the undead have pervaded pop culture ever since we figured out how to make pictures move — but in the context of video games, their presence is especially visible and even embraced.

Don't get me wrong. Some games were meant to feature our shambling brethren. Left 4 Dead 2 espouses teamwork to escape some terrifyingly clever undead foes such as the pouncing Hunter and the gargantuan Tank. Dead Rising 2 allows us to fashion some of the most ridiculous zombie-slaying weapons ever. And the quirky Plants vs. Zombies illustrates the benefits of keeping a well-tended garden during a zombie apocalypse.

Of course, there's the other side of the rotten coin — games that contain walking corpses purely out of principle. Or worse, some boneheaded notion that mindless horrors represent a game's biggest challenge it can throw at you.

Chalk it up to wonky mini-games, fan service, or sheer developer laziness in programming enemy AI. But no matter how you dice it, nonsensical zombie appearances can hamper gameplay and throw the plot and setting into a death-spin. Here are five examples of great games that should've tried to remain unscathed from zombie-mania.

Let me make this extremely clear: Like Will Smith, zombies have no place in the Wild West. But try telling that to the throngs of cowboys who downloaded the zombie-themed Undead Nightmare, Red Dead Redemption's latest addon pack. 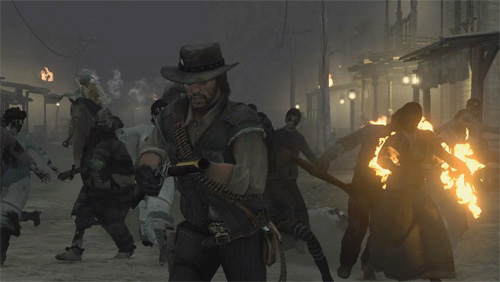 Look, I realize the audacity of featuring a open-world game in the Western frontier. The probablity of crazy things happening is pretty high. But I also realize Rockstar's often far-fetched adherence to realism in its games typically precludes walking dead people. RDR hails itself as a gritty retelling of an important piece of American history, an allegory to the rise of technology in the face of traditionalism. After conferring with the nearest historian, I can confirm that no documentation exists of a zombie plague playing any part in defining the early 1900s.

So when I hunker down next to my trusty steed in the desolate range, kicking my boots back to warm on the campfire, I don't want to have to worry about a zombie punching my lights out from behind. Bounty hunters, maybe. But not zombies.

Call of Duty: World at War

Most of us are familiar with the admittedly awesome concept of Nazi zombies. Propagated by noteworthy shooters such as Return to Castle Wolfenstein, the undead hordes of Werhmacht and SS troops offer a supreme blend of entertainment and evil in one goose-stepping package.

Call of Duty: World at War's unlockable zombie mode could've been a worthwhile accessory to its run-of-the-mill single-player campaign…if it weren't for the unfathomable inclusion of one of the zaniest backstories I've ever had the displeasure to read. 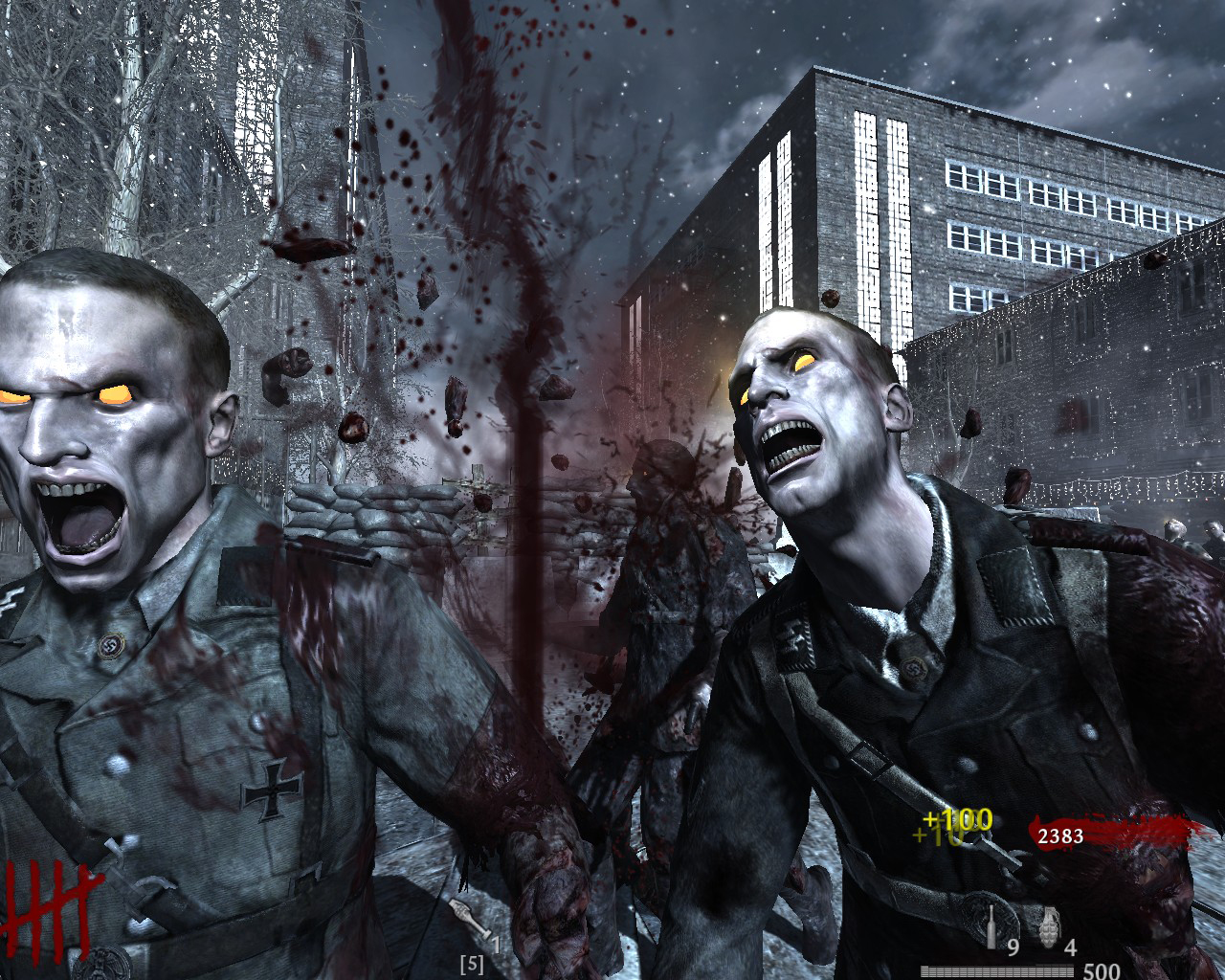 I won't even try to explain the specifics on why a bunch of undead Germans and Japanese started to show up in the Pacific Theater and Germany. Let's just say it involves teleportation, Area 51, and a mutant pregnant hellhound named "Fluffy."

Shooting Nazi zombies in the face never gets old; hell, it's the patriotic thing to do. But that's all I want my mind to occupy itself with while I perform the deed. I don't want to wonder if this whole mess could've been averted if some demonic Schnauzer had a litter of zombie puppies or something. Essentially, if any semblance of a plot is grafted onto the action, the resulting abomination kills the fun dead. As in, completely dead. Never to rise again.

Wait! There aren't any zombies in Mass Effect…or are there?

In the traditional sense, no. In the self-righteous and (literally) highly technical sense, definitely yes. 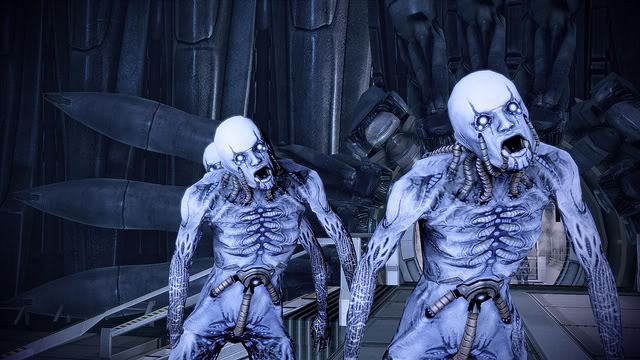 Enter the Husk. According to the game's official codex, Husks are synthetic creations formed out of the remains of a human impaled upon large spikes left behind by the robotic Geth. When approached within reaching distance, a Husk will emit an electrical charge that disables shields and causes massive damage.

But please, don't call them zombies. Even though that's what they blatantly resemble.

Their eyes are twin orbs of emptiness. They dutifully shuffle towards you whenever you get too close. Their heads loll to the side while their arms stretch out in grasping motions. Sound familiar yet?

The real issue with Husks, however, is that they totally contradict the game's heavy science fiction influence. I'm wearing high-tech armor that would put Starcraft's Protoss to shame. I bristle with weaponry that fire massless metal shavings. And for chrissakes, my alien-stocked starship is a technophile's wet dream come true. If BioWare touts their game as the epitome of sci-fi, I should be calibrating instruments and trading quips with sexy alien princesses, not dealing with such medieval trivialities like plastic zombies.

As the first entry in one of the most successful franchises of all time, Halo introduced us to such memorable characters as Master Chief, Cortana, and the Elites.

It also introduced The Flood, extraterrestrial parasites that latch onto corpses and living tissue to feed on and control.

Just like Mass Effect, the appearance of zombie-like enemies in the midst of Halo's heavy science fiction motif sends me mixed messages. Isn't this game supposed to be an epic space opera or something? Why am I being forced to deal with scuttling boogers who possess the tactical wherewithal of a doorknob, especially after engaging with the strategizing and vividly exotic Covenant? And why, oh why, did I have to suffer through that annoying Library level?

To add insult to injury, some of the damn things had enough dexterity to even shoot you. Now that's just mean.

The mantra of "You can't have a role-playing game without zombies" rings especially true in the massively-multiplayer World of Warcraft. Clearly, zombies present easy fodder to sharpen my axe with, and there's certainly plenty of them to go around in Wrath of the Lich King, the current expansion.

But I can't help but cringe when said zombies are trumped up to assume just-as-important roles in Warcraft's expansive lore as its living and breathing denizens.

From a gameplay standpoint, I'm completely fine with the so-called Scourge and their machinations to turn the land into a zombie playground. As one of four playable factions in Warcraft 3, the Scourge is well-balanced against its opponents with a mixture of powerful air units and defensive ground forces.

By the way, WoW's appearance on this list wasn't precipitated whatsoever by my guild's recent 25-man Heroic Mode victory over the Lich King, ruler of the Scourge and the hardest dungeon encounter in the game. Nope. Not one bit.