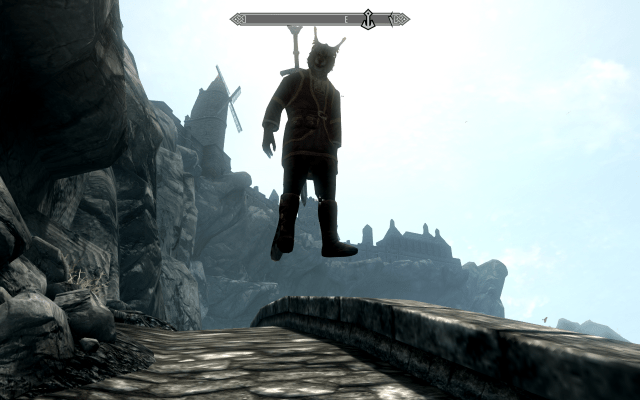 Bethesda Softworks is undoubtedly looking at numerous game of the year awards for their epic role-playing game The Elder Scrolls V: Skyrim, but their long-running history with releasing utterly broken games continues to dampen any design achievements. While there is no end to the list of complaints, bugs, glitches, exploits, and miscellaneous issues players have experienced, the severe slowdown that’s demolished the playability of the PlayStation 3 version (see video below) has endured the recent patch intended to fix it.

In fact, that patch brought with it a number of new problems, including rendering magical resistances useless and backwards-flying dragons. The slowdown is caused by an ever-expanding save game file. After a few hours of playtime, the save file gathers too much data for the PlayStation 3 to handle, causing the gameplay to stutter so drastically that a manual reset is required, which temporarily dumps the extra information causing the slowdown . This specific issue doesn’t affect the Xbox 360 or PC versions in any notable way.

Recently, a member of Obsidian Entertainment–who previously developed what is arguably one of, if not the buggiest mainstream game ever released, Fallout: New Vegas, for Skyrim publisher Bethesda Softworks–has spoken out on the cause, and the hypothetical cure. Answering questions on his personal Formspring account, Obsidian’s Project Director Josh Sawyer explains:

The Xbox 360 has a unified memory pool: 512 megs of RAM usable as system memory or graphics memory. The PS3 has a divided memory pool: 256 megs for system, 256 for graphics. It’s the same total amount of memory, but not as flexible for a developer to make use of. It’s not like someone wrote a function and put a decimal point in the wrong place or declared something as a float when it should have been an int. We’re talking about how the engine fundamentally saves off and references data at run time. Restructuring how that works would require a large time commitment.

To be clear, Sawyer is not a Bethesda employee or spokesperson, and he’s referring specifically to Fallout: New Vegas, yet he does directly connect the two games (Fallout and Skyrim) to the PlayStation 3 memory issue. This revelation is particularly troubling, especially given that previous Bethesda titles using older engines suffered from many similar issues that Skyrim’s new, highly-touted Creation Engine failed to address. Project leader Todd Howard stated in an interview that the development team reached all of the technical goals they set for themselves and “kept going.” Apparently making sure that their game worked properly at launch was not on that list.

Meanwhile, Bethesda has (somewhat) acknowledged they may have screwed up their multi-platinum technical Jenga tower:

To be safe, we are prioritizing code side fixes right now over data fixes. Quest and balance issues are usually data, and those will start rolling in a large way with the January updates. We all know this is a huge game, and everyone has a different experience. We’ll continue to do everything we can to make the game better and better for as many people as possible every day. We’ve also realized that with the millions upon millions of people playing Skyrim, we need to treat our updates with greater care. If we get too aggressive trying to fix a minor issue, we run a risk of breaking something larger in a game like this.

Unfortunately, most Skyrim owners without access to the internet have no way of patching their game. I don’t how care how good a game is (and yes, it can be very good), it’s unacceptable for a product to hit the market in such shoddy condition, regardless of how ambitious it may be or how well it ends up selling. It took me all of about three minutes to encounter my first glitch in Skyrim, and about five hours before I reached a quest that couldn’t be completed, just like in Oblivion; you can’t tell me that an entire team of QA testers didn’t notice that this game was fundamentally unready to be released.