[Update: Creator Dong Nguyen tweeted he is pulling the app down.] The lone developer of the mobile smash hit Flappy Bird has released an update that fixes the problems that have frustrated many players. 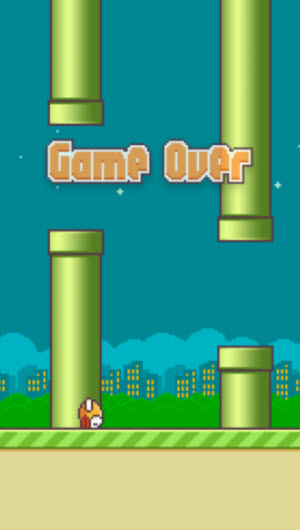 The new update slows down the game and makes it easier to fly through the narrow gaps between vertical pipes. That’s an important change as the free Flappy Bird app on iOS and Android has been downloaded an estimated 50 million times in a very short period, making it one of the most successful mobile games of all time.

Now the game will be more accessible to players, and it won’t be quite as frustrating. While Flappy Bird has proven addictive, it has also made players want to toss their phone out the window after lots of bird crashes.

Creator Dong Nguyen of DotGears Studios said the game has been making about $50,000 per day in ad revenues, and he does not plan to add in-app purchases — the usual way that mobile games generate revenue. Flappy Bird is still holding its No. 1 position on both iOS and Google Play among free apps.

The update also fixes the potential problem where the pipes looked a lot like pipes from Nintendo’s Mario series. That reduces the risk of any copyright litigation. The background is now also different, with a kind of evening cityscape view.

Nguyen now has three apps in the top free mobile game charts. He said he is thinking about doing a sequel but hasn’t figured out a time frame for it yet.