The San Francisco company says its concept is the next evolution of rock music games, as it allows players to step onstage in fully immersive VR. It merges concert images with a VR experience that lets you live the rock star fantasy of performing in front of thousands of fans. The company is seeking to raise $500,000 in a one-week campaign that will close on April 4.

The game will compete with Rock Band VR, which launched on March 23 on the Oculus Rift VR headset. You will be able to look anywhere in the VR environment and still see the notes that you have to play, based on gems that light up on the screen. You’ll see a frenzy of fireworks or band mates rocking out beside you.

“We did a lot of visual experimentation,” says Kahn Jekarl, the founder and CEO of Flow State Media, in a statement. “But I think we found a great solution so that players can take advantage of being immersed in a VR environment while still having a fun game to play.” 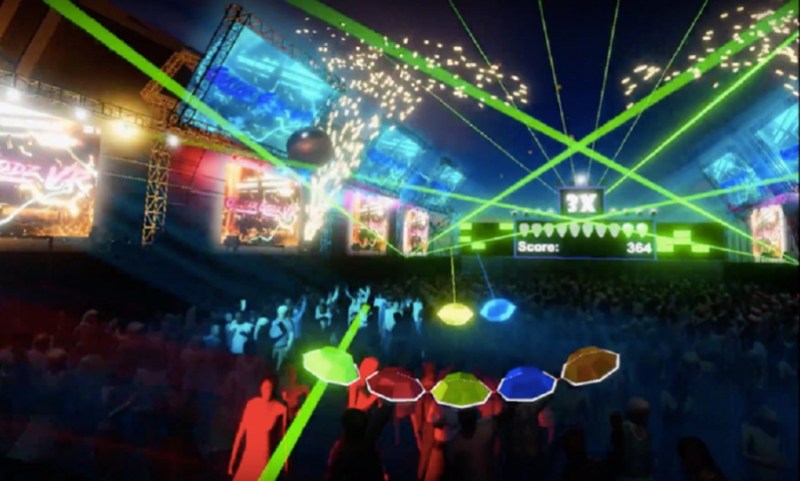 Above: Guitar Godz VR lets you look at the crowd and still see the notes you have to hit.

“We fully recognize that no one wants to buy more plastic instruments, so we’ve found a solution that offers maximum flexibility to players at no additional cost,” said Jekarl.

While players can use many existing guitar controllers to play the game, what’s unique about Flow State’s solution is the capability to use the 3D controllers that come with the PlayStation VR, HTC Vive and Oculus Rift.

Jekarl added, “One controller holds down the frets, the other controller is used for strumming. If you’ve ever played ‘air guitar,’ you instantly get it. It’s an absolute blast to play, and extremely visceral and core to the experience of rocking out onstage.” 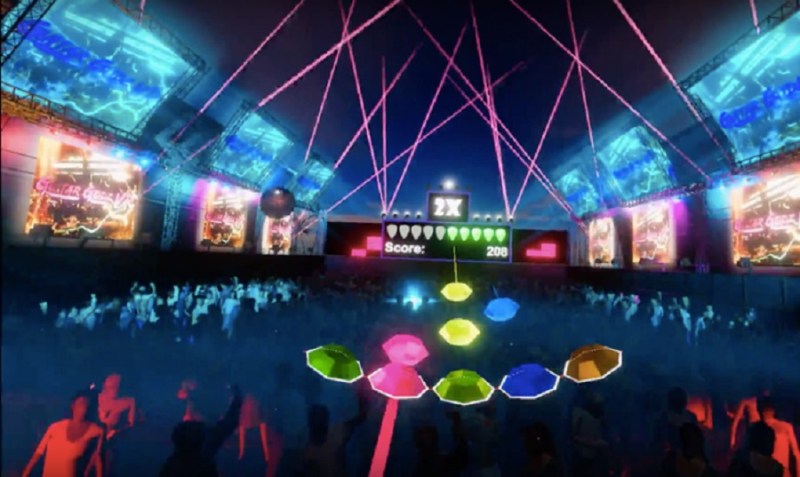 Guitar Godz VR features a free camera mode, where players are free to look all over the VR environment while still able to see what notes they have to play. It also has local multiplayer play. With PlayStation VR, you can play guitar in the headset while a friend plays bass on the TV.

The company promises 40 songs licensed from big rock musicians, with content spanning from the 1960s to today. The songs will be announced later. The title is being targeted for release in the fall.

“People will always love music. People will always love music games. When you take the time to look, you see that there’s pent-up demand for a great music game experience,” Jekarl said. “Check Twitch, check Reddit, these communities are still very much alive and well, so we want to deliver a game that music game fans can fully enjoy. And we couldn’t think of a better platform than Kickstarter to announce that Guitar Godz VR exists. We hope that the Guitar Godz VR Kickstarter campaign is a rallying cry to all music game fans that says ‘Yes, we’re still here, and our love of rocking out never went away’.”

Flow State Media was founded in 2012. It has had more than 2 million downloads across its mobile games such as Word Smart, Letter UP, and Zodiac Brawlers: Gem Puzzler. Flow State Media is a venture-backed company whose investors include SparkLabs Global and Strong Ventures.