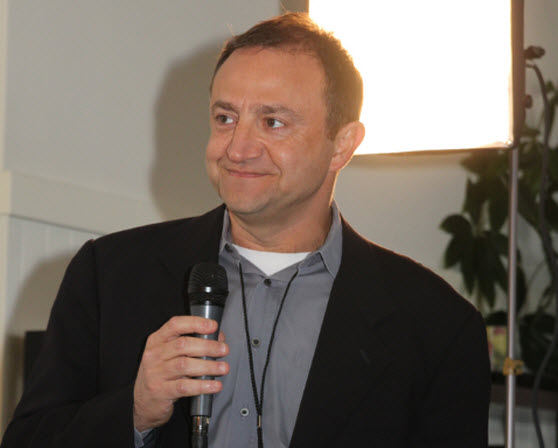 You know what they say about how knowledge is power? Mobile analytics firm Flurry knows everything about everybody who uses mobile apps. It keeps tabs on app usage on about 700 million mobile devices every month.

The San Francisco company has parlayed that knowledge into services that advertise games and apps to the users who really want them. And that’s why Flurry has just raised $25 million in a fourth round of funding led by Crosslink Capital. The funding brings the company’s total amount raised to $51.6 million. The number of users that Flurry measures has grown 47 months in a row, said Simon Khalaf, chief executive of Flurry, in an interview with GamesBeat.

Just about anyone who has an app uses Flurry to measure how it gets used. Over the past year, Flurry has quadrupled the number of data points it measures to over 32 billion per day. Each day, the company measures 1.9 billion app user sessions across more than 250 million devices. Flurry tracks 250,000 apps, up from 120,000 a year ago. About 80,000 companies use Flurry across iOS, Android, Windows Phone, and other platforms. From that data, Khalaf (pictured above) says he knows that media entertainment, especially on tablets, is starting to become huge on mobile devices, in addition to games and other apps.

Flurry makes money by using its data to recommend apps to users based on what they already have on their phones and how much they use certain apps. Flurry’s AppCircle ad network advertises apps for targeted users. Over the past year, AppCircle has grown its volume three-fold and helped Flurry become cash-flow positive. AppCircle now delivers more than 120 million monthly ad conversions  (the number of times when a user installs an app based on a Flurry ad).

These ad services are generating a lot of money for developers, Khalaf said. The average revenue per daily active user is rising. If an app reaches 100,000 users, it can start to generate real numbers that can support a small company, Khalaf said.

“There is a real long tail now,” he said.

“Flurry is powering a new wave of digital advertising with big data for the mobile app economy in an exciting way,” said Mignano.  “The scale at which the company is operating in terms of data volume, ad serving, and revenue generation impressed our team.  This enables one of the most exciting uses of data for business customers since our private investment in Omniture in 2006.”

Khalaf said that Flurry wasn’t considering raising money since it had $9 million in the bank and was already profitable. But the in-bound demand to invest in Flurry was strong, and the board decided to take advantage of it, Khalaf said.

“We had so much in-bound interest that we change our minds,” he said. “The good thing is that Flurry is what it was and is what it wants to be. We have done phenomenal with mobile analytics.”

Rivals include Google Analytics, Kontagent, Swrve, and others. In ad services, Flurry competes with ad networks like Tapjoy. Flurry will use the money to accelerate its newly introduced AppSpot supply-side platform and other products. Khalaf said that Flurry has 110 employees.

“Analytics and AppCircle will continue to grow,” Khalaf. “We add more to our platform.”

Flurry faces the occasional risk of angering platform owners such as Apple. A while back, it discovered new devices operating out of Apple’s headquarters, and it unmasked the original iPad. Apple got pretty angry about that. But by and large, relations with platform owners are good, Khalaf said.

“Apple is a rational company,” he said.