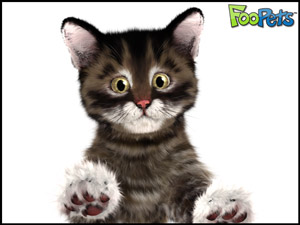 Virtual pets have a big presence in the digital world, from the little Tamagotchi gadgets to the popular Nintendogs game on the Nintendo DS. Now FooMojo is entering the fray with the most realistic interactive virtual pets introduced to date.

The Redwood City, Calif. company has been testing its approach with the Pokey virtual pet dog application launched on Facebook earlier this year. Now it’s introducing FooPets.com, a web site based on quite lifelike puppies and kittens.

The idea is to provide people with virtual companions who behave the way real pets do and to educate people about how to properly take care of pets. You have to take them to the kennel if you plan to be away for a while. You have to take care of their flea infestations and worms or consequences will ensue. You can play with them in living rooms, backyards, or walk them through little obstacle courses. 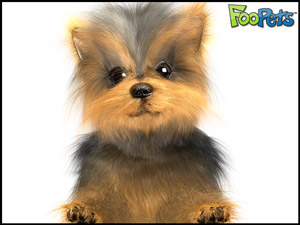 While many pet games use cartoon-like animation (such as Moshi Monsters), FooPets is shooting for animals that look, move and breathe as if they’re real. The pets are emotionally engaging, develop their own personalities and reacting to the way you treat them. If you treat them well, they’ll live normal pet lifespans and present challenges; if you don’t feed them, they become scrawny and eventually die.

The idea is to expand the virtual pets market from kids to all ages. The market is proven in many ways. Nintendo’s semi-realistic Nintendogs game has sold more than 20 million copies worldwide on the Nintendo DS, generating something like $600 million in revenue (I’ve always wondered why the company never came out with a Nintencats). The Tamagotchi virtual pets, which have very simple animations, have sold more than 70 million units since 1996. 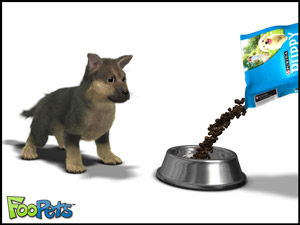 The Pokey virtual puppy application has gained more than a million active users since its introduction in February. Now the company is adding kittens for the first time. The software is web-based and so you can access your pets from Facebook, MySpace, the iPhone, or the FooPets site. Active users have been checking up on their pets about two or three times a day. About 85 percent of users are female, which means the game is tapping into people who normally aren’t the biggest hardcore game fans.

Ron Hornbaker, founder and chief executive, notes that people now spend over a quarter of their waking hours on the web and that they need as much companionship there as they do in real life.

Owners receive FooPet currency, called FooDollars, that can be used to buy food, pet accessories, and pet services in the virtual world. Owners can decorate a pet’s habitat, teach it tricks, take pictures of it and show it off to friends. They can even ask questions about proper care on forums. 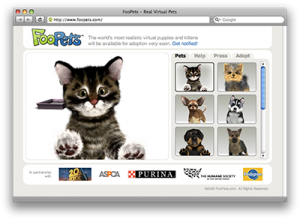 The company will add new pet breeds over time. Hornbaker, a veterinarian who became a serial entrepreneur, founded the company in 2007. Hornbaker’s previous companies include Book Crossing, Propsmart.com, and Statsaholic.com. He has hired artists from Pixar, DreamWorks, Lucas Films, and George Lucas’s Industrial Light & Magic.

The company is working with animal-related charities such as the ASPCA and the Humane Society. Users can make donations to the groups directly from the applications.

The business model is product placement. In a particularly good marketing deal that taps into the $41 billion U.S. pet goods market, FooMojo has signed Nestle Purina Petcare as the food sponsor inside the virtual pets world. The Switzerland-based subsidiary of Nestle has paid FooMojo an undisclosed amount for the right to advertise its Purina Dog Chow and other products in the world. In Europe, pet food maker Pedigree is the food brand sponsor.

FooMojo also signed up the Twentieth Century Fox film studio as a sponsor, since it’s releasing Marley & Me, a movie featuring a family dog, on December 25. These marketing deals are helping to finance the game. The virtual pets are free, except for the Marley & Me pet application that will be available for a small fee on the iPhone starting Dec. 17.

Investors include Softbank Capital, Softbank Corp. Japan, Mike Maples, Ron Conway and Baseline Ventures. The company has raised about $10.7 million in two rounds of funding, including a $9.9 million round in September from Softbank and Softbank Corp. of Japan. Hornbaker said the deal closed a week before the financial meltdown and so he considers himself extremely lucky and well financed. The company has 22 employees.