The second generation of virtual reality is now officially a full-blown consumer product. We can no longer linger around the outer rim of virtual reality, dipping our toes into the water, while holding a Google Cardboard box over our eyes and exclaiming, “This is the future of consumer entertainment!”

The idea is no longer the future. It’s the now.

And Samsung has taken it upon itself to be an early pioneer of this new world with its Samsung Gear VR unit. It’s a legit hard plastic consumer grade product, that palms my face while feeding my eyes a virtual reality experience. And this product is launching just in time to slide under a tree for Christmas, hitting select stores today at $100. That price is a bit misleading, considering you’ll also need a Samsung phone capable of running virtual reality apps that can also fit inside the unit (Galaxy Note 5, Galaxy 6S, Galaxy 6S Edge, and Galaxy 6S Edge+).

But do I think Samsung’s design sense has earned the roll as main gatekeeper for my VR? Can you see the subtle way my shoulders are shrugging? No?

Let’s strap this thing to my face

The Samsung Gear VR comes with a pair of straps, one that hugs the back of the head horizontally, and another that lays vertically over the crown of the skull. I have a fairly large head, so with the straps set to their largest points, the Samsung Gear VR fit comfortably on my dome. It didn’t feel too tight, and it allowed for just enough wiggle room to adjust my glasses.

One of the hiccups I run into when trying virtual reality headsets, which most of them wind up failing on, is that they are often too tight for my head. Again, I have a larger-than-average noggin, but this also means that I have wider than normal glasses as well. On the Oculus Rift, for example, I have to remove my glasses entirely. So virtual reality winds up being a lot like regular reality, but just a little bit more blind.

Those headsets that do accommodate my wide glasses wind up smashing the lenses into my cornea. So then virtual reality becomes like regular reality, with a filter of eyeball juice on top.

The Samsung Gear VR features a foam rim around the eye opening, which is just forgiving enough to let my glasses muscle their way into the unit. I still wind up smashing my glasses into my face getting the thing on, but the looseness of the straps also allows me to scoot my glasses forward once the goggles are hugging my face. So far, I’d say it’s the second-friendliest virtual reality unit for my glasses (the leader here is Sony’s PlayStation VR). 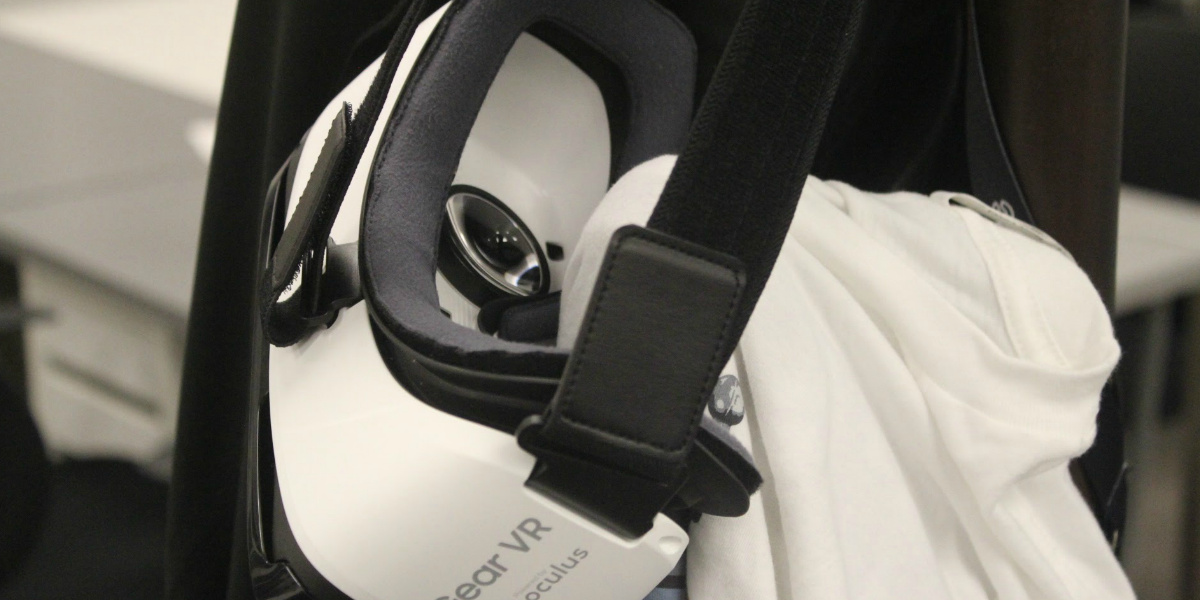 The Samsung Gear VR unit I was using came with a Samsung Galaxy S6 Edge+ smart phone, which attaches to the front via two hinge clamps molded specifically to snag the device comfortably. One clamp has the micro-USB connection, which allows the phone to communicate with the Samsung Gear VR. The other clamp adds pressure to the other side of the phone, locking it in place.

After the phone is jammed into position, a black cover slips over the front of the goggles, which shields most exterior light sources from sneaking inside the viewing area. Although with the Samsung Galaxy S6 Edge+, it covered the viewing area so much that the back cover wasn’t needed. In fact, you’ll want to remove that cover to access the front camera view, which shows you what you’re looking at in the real world.

The Samsung Gear VR’s locking system is obviously built primarily around Samsung devices. I tried locking in an older Galaxy S5, which failed miserably. In fact, I tried a number of virtual reality capable mobile devices around the office, and none of them were usable in the Samsung Gear VR. Either they lacked a micro-USB connection, or the micro-USB connection was facing the wrong direction, making the screen face outwards.

This means if I want to run virtual reality on a Samsung Gear VR, I better go purchase a new Samsung phone. Although I don’t expect Samsung to create a product that bends to the design whims of their competitors, it’s still a bit disappointing how I couldn’t connect anything else in the office to this unit. It create this slight tinge that virtual reality is a mobile phone accessory, instead of being the main event of its own show.

One other minor annoyance about this set up is that the Samsung Gear VR has to be charged separately from the phone. The goggles didn’t share the charge to the phone that is hooked up to the unit. I thought that was odd, but maybe I am asking for something that is technically not feasible? On the right side of the Samsung Gear VR is what looks like, and feels like, a directional pad from a video game controller with a button in the center. This is for navigating and making primary selections, but it doesn’t quite work by “pressing” on anything. It’s not so much analog input, where I am pressing down on a piece of plastic that activates a switch, as it is more of a tactile sensor like a touchpad on a laptop.

So if I want to communicate to Samsung Gear VR that I want to go forward, I need to swipe my hand forward, not press a button. The main selection input works similarly. It’s not a button, so performing a firm push only kinda-sorta gives me the input I want. What it needs is a light tap.

It’s an interesting way of doing things, and it doesn’t take long to master. I imagine it’s probably the better way of accepting input, since a switch-based system would mean putting subtle horizontal pressure on the goggles, and thus your head.

The one analog input on the right side is the back button, which also makes perfect sense. I don’t want to accidentally exit the virtual reality experience because I blindly brushed a sensor. Exiting should be a deliberate and firm decision.

When this control scheme doesn’t quite fit what I am trying to do, I can always sync up a Bluetooth-enabled gamepad to the Samsung mobile device and use that.

The quality of the virtual reality experience is heavily dependent on the app being run, and the hardware running it. So when discussing the Samsung Gear VR in terms of just the goggle unit itself, the product worked perfectly fine when tweaked for my head and glasses.

It’s light weight, so I didn’t feel any strain wearing it for long periods of time. When using a Samsung device to run the virtual reality apps, light is completely blocked from entering the viewing area, even without the front plate installed.

There was nothing about the goggles that made the experience feel extraordinarily disorienting, although I watched one person who had never tried virtual reality feel dizzy while using the Samsung Gear VR. I chalk that up to inexperience with the medium in general. I’ve had so many virtual reality tech demos thrown at me this year, that I’ve become mostly desensitized from the disorientation effects. At least enough to not get motion sickness.

The only big hiccup I ran into using the Samsung Gear VR for virtual reality were actually tied to the Samsung Galaxy S6 Edge+. The phone is prone to overheating quickly when using it for extended periods of time with some more game intensive virtual reality apps. When the device is really being pushed to render the real-time 3D graphics and calculate gameplay, I have what feels like 15 to 20 minutes before the hardware overheats and starts complaining.

This experience opened my eyes to one of the big weaknesses of mobile virtual reality as a whole. We’re not dealing with a PC gaming tower that has plenty of room to run a bunch of fans or liquid cooled plumbing. Developers, marketers, and consumers may need to collectively adjust their expectations when it comes to mobile virtual reality.

My other issue with the Samsung Gear VR is how I am locked into the Samsung/Oculus front end. Any virtual reality app I download from another source, such as the Google Play Store, isn’t accessible while the phone is hooked up to the unit. Granted, some of these apps aren’t specifically developed to run in Samsung Gear VR, but the unit isn’t doing anything especially different from other goggles when it comes to viewing virtual reality. A lot of these apps should work, in theory.

And even if they don’t, I feel like I should be allowed to try, since they are just sitting right there on the phone. It’s not as if running these things will hurt the goggles in any ways.

Perhaps this is the price of virtual reality going full consumer grade, though? The Wild West of simply running whatever virtual reality apps I want is getting safety rails installed. Where I see this as a con, consumers that want the safety of a nicely constructed and controlled environment may see this as a pro.

If you already have a compatible Samsung phone and $100 to burn, the Samsung Gear VR is a solid headset. Compared to Google Cardboard, you’re getting the luxury of a solid hard plastic unit that straps to your head comfortably while leaving both hands free. It’s pretty forgiving on the glasses front, and has an interesting way of tackling the virtual reality menu navigation with its touchpad controls.

If your phone isn’t compatible, however, I don’t feel that the Samsung Gear VR or the medium’s current experiences alone are worth the expense of uprooting your mobile device. We’re talking $100 for the headset and $300 for a no-contract Samsung Galaxy S6 Edge+, and we aren’t even into headphones or a wireless controller. I’d suggest waiting until after the holidays, save that cash for gifts, and stick to Google Cardboard. At least until we see what other headsets hit … or your phone gets so outdated that you need a new Samsung device.