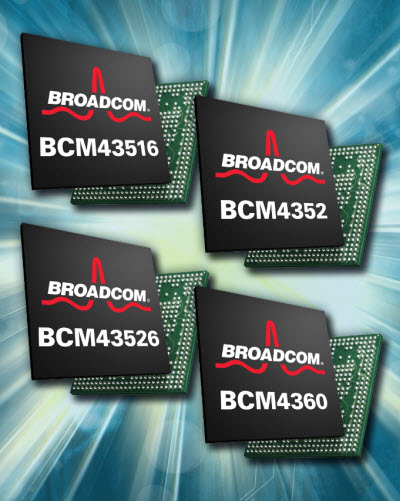 Broadcom is announcing today its first WiFi chips that will allow wireless to surf the web at a speed of 1.3 gigabits per second. That is several times faster than existing network speeds, and these so-called 5G WiFi chips will be used in products coming out as early as the second quarter.

Broadcom and a number of other chip and wireless product companies are supporting the new technology, which will be on display at the Consumer Electronic Show next week in Las Vegas. This kind of faster networking is needed because consumers are watching videos and playing streamed games on a variety of devices and screens in the home these days. It could also be great for activities such as multiplayer gaming.

The name 5G WiFi is a clever bit of marketing, but accurate enough, said Michael Hurlston, senior vice president of the mobile and wireless group at Broadcom, a chip giant based in Irvine, Calif. The technology uses the 802.11ac engineering protocol, or the fifth generation of WiFi standards.

In that sense, Broadcom can position WiFi as faster than 4G, which the cellular phone companies are rolling out as the fastest mobile phone data networks. Hurlston said that WiFi has always been faster than cellular data networks, so the naming of 5G WiFi versus 4G cellular is apt. But it may lead to consumer confusion down the road as 5G mobile networks debut at some point.

“We made sure WiFi was part of the name so that consumers recognize what it is when we say 5G,” Hurlston said.

Still, since WiFi is faster than mobile networking such as 4G LTE, WiFi is expected to be a big part of gadgetry in the future. More than 3 billion wireless-enabled WiFi devices are expected to be in use by 2015, according to Mark Hung, research director at Gartner Research. This generation of wireless could thus be the most influential wireless technology in the years to come, he said.

With the faster technology, users can sling video from a central hub to a screen in a distant bedroom. They can synch a lot of music or video files wirelessly, and surf the internet without killing the battery life of the device they’re using.

Broadcom’s first family of chips designed for 802.11ac will be three times faster and six times more power efficient than previous 802.11n chips. The power efficiency stems from the faster speeds, as you can power down a wireless access point more quickly if the data moves more quickly through it. Video is expected to reach 90 percent of global consumer traffic, according to Cisco’s Visual Networking Index Forecast.

The chips include the BCM4360, BCM4352, BCM43526 and BCM43516. The fastest chip, the BCM 4360, supports three simultaneous streams. But the other chips will support just one or two streams and will be more appropriate for smartphones and tablets.