Brianna Wu, the head of development and cofounder of Giant Spacekat, said she has received more than 180 death threats in the past year because of her vocal opposition of Internet haters in the controversy known as GamerGate. Wu has been faced with the dilemma of disclosing the death threats and calling for more action against those who make them while simultaneously trying to get more women into the game industry to change it for the better.

But she doesn’t just want to be painted as a victim. Wu has become excited about virtual reality and its ability to make communication within games much more human, with the ability to express story, narrative, emotion, and empathy. She believes these features are more easily invoked in visceral, immersive VR experiences. By delivering new kinds of experiences, Wu believes that the industry can attract a more diverse group of gamers, including girls and women. And that’s why she is moving her studio beyond mobile and into VR.

I interviewed her in a very frank yet optimistic fireside chat our GamesBeat 2015 conference. Here’s an edited transcript of our conversation. 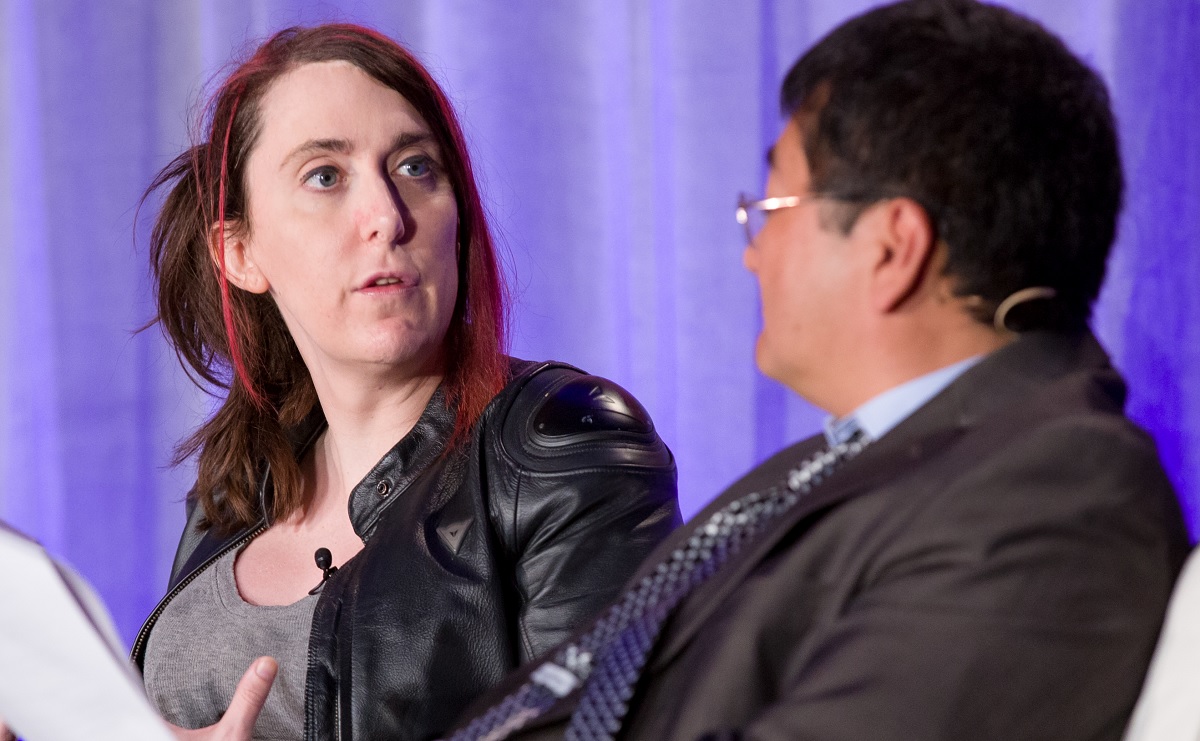 Above: Brianna Wu has received 180 death threats over the past year because of GamerGate.

GamesBeat: I pointed out this morning that GamerGate happened in 2014, not 1865. I wonder how its intensity impressed you or surprised you.

Brianna Wu: Yeah. This week I expect to cross 180 death threats in under a year. The rape threats I don’t even report to the FBI anymore. The intensity has been terrible. How do you put a price on people who spend all day, every day, trying to ruin your life?

I did a talk at Google the other day, a well-received talk, and someone from GamerGate sat there and downloaded the video all day long. It’s people who have nothing better to do with their time. It’s exhausting.

GamesBeat: Looking back on this last year, the Internet hate and the threats, can you draw any lesson from it?

Wu: Sometimes, when you talk to people who’ve been in recovery for substance abuse issues, they have this concept they call “rock bottom.” It gets so bad that you have to make changes to your life. This last year, with all respect to the men in this industry, has been the year technology hit rock bottom as far as the way we treat women. It’s at a point where we can’t ignore it anymore.

Sometimes it’s easy to get discouraged. As you said, the intensity of it is exhausting. But at the same time we’re having conversations today that we could not have had five years ago, or even three years ago. It had to get worse to get better.

GamesBeat: How do you balance this need to tell people about it and the problems that still exist in the game industry against the concern that you might frighten women away from considering careers in gaming?

Wu: I struggle with this every day. Something that’s hard for me, I remember being a child in the ‘80s and looking at this field. It was a field I wanted very much to go into, but I didn’t see people who looked like me working in video games. You can’t really be it if you can’t see it. So I do worry about scaring young girls off. I get letters from girls who are eight, 10, 12, and they tell me, “I want to become a game developer, but I’m terrified that what happened to you will happen to me.”

We have to think about that. But at the same time, ignoring it isn’t going to work. We got to this point through the game industry ignoring its cultural issues for 30 years. What I do is, I look them in the eye and I promise that we’ll make it better. We’re following through on that. 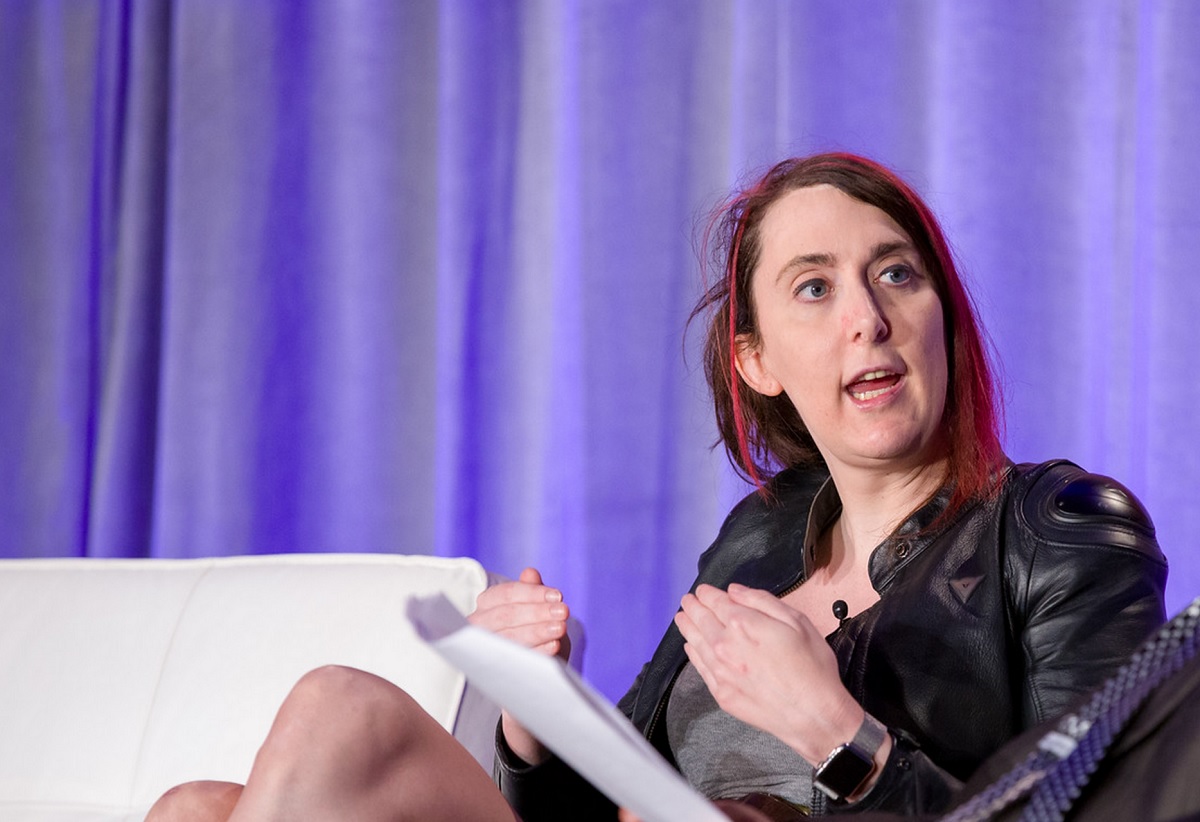 Above: Brianna Wu is steering her Giant Spacekat indie studio into virtual reality.

GamesBeat: You’ve managed to find a creative spark in this, something related to virtual reality. Tell me about that.

Wu: I left Oculus Connect a few weeks ago more psyched than I’ve ever felt in my life about the longevity and the sustainability of VR. That said, I can’t help but look at some of my friends that are working in this field—Look at Epic’s tech demo. At Oculus Connect, Epic used the Unreal engine and came out with a tech demo that got rave reviews. But what is it? It’s a demo where you’re on a train killing robots in a first-person shooter. Let’s try out the same playbook yet again.

What we’re doing at our studio is asking ourselves what might be the fundamental building block that’s missing from the game industry. It’s empathy. We’re currently in the middle of raising money to build frameworks for the Unreal engine that excel at emotional detection. What I mean by that is, just like your iPhone—Your iPhone caught on like wildfire because we all have a finger. We’re directly touching tools that were built to use every day in a very natural way.

I think about VR and the kinds of ways you make story-driven gameplay for it. You don’t want to hold a controller with 15 buttons to experience a story. You want to use your voice, your eyes, your emotion, the tone of your voice. Do you sound angry? Do you sound sad? That’s the direction we’re going.

GamesBeat: It’s almost like there’s a technological answer to this problem of human behavior.

Wu: I think so. I can’t take credit for this thought. This is from Ben Kuchera at Polygon. But he said something that I think was dead on – “I don’t think Gamergate would have gotten to the point it’s at if so much of our communication hadn’t been on Twitter.” That’s so true. I have had conversations that were very aggressive on Twitter with certain people that I don’t agree with on anything politically. Then I call them on the phone and say, “Hey, can we have a cup of coffee and talk like two adults?” Then we’re in person and it’s awesome.

I feel like Twitter and other social media tools leave out all this emotional communication. That becomes superfluous. Going forward, I believe the next generation of social networks will have this emotional component to them. We want to be the people building the tools that make that happen.

GamesBeat: VR can also be a very immersive technology. People are warning that many VR apps could make us even less social, hiding in the corner in our goggles. How do you get around that?

Wu: I don’t know how it could be worse than it is right now, when you don’t even look a single person in the eye crossing the street here. Part of that solution is going to be augmented reality. I feel like we don’t talk enough about this. My bet is that AR is going to end up being much bigger than VR. But the way we connect to each other in VR, because it’s more immersive—We can represent ourselves and bring more of that data across.

Maybe it’s optimistic, but I feel like we’re in the baby talk stage of all these things. I can’t help but think that eventually technology is going to follow through on the promise of the ‘90s. It’ll connect us more than it tears us apart.