Nintendo has had trouble with third-party software support on its consoles for decades, but it’s promising to change that (again) with the Switch.

Earlier this morning, the publisher revealed the new Nintendo Switch console in a three-minute trailer. The video detailed a console that can transform from a home device that you connect to your TV into an on-the-go handheld that is more advanced than a Vita. Switch runs on Nvidia’s mobile architecture, and that means developing for it is likely fairly similar to building software for an Android tablet. With that in mind, Nintendo has rolled out a list of partners that it is working with to make games for the Switch — and that includes some big names. 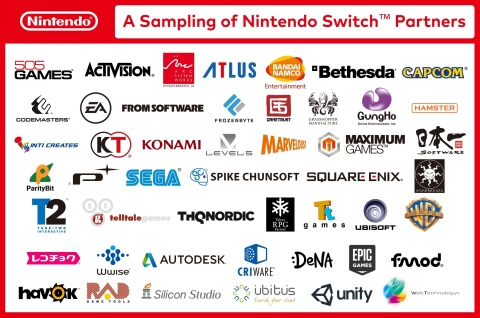 Above: Partners for Switch.

Unlike the Wii U, which lost support even before it launched, Switch will see games from major publishers Electronic Arts, Activision, Ubisoft, Square Enix, and Warner Bros. But the Switch is also bringing in partners that it hasn’t really worked with before. That includes Elder Scrolls studio Bethesda and Dark Souls creator From Software as well as Puzzle & Dragons publisher GungHo.

We’ve already seen Skyrim running on the Switch in the trailer, and that seems like Nintendo’s way of appealing to the massive audience of gamers who already own a PlayStation 4 and Xbox One but may also want a way to play those games on the go.

@patrickklepek What have you started? pic.twitter.com/JTDoZOsaMd