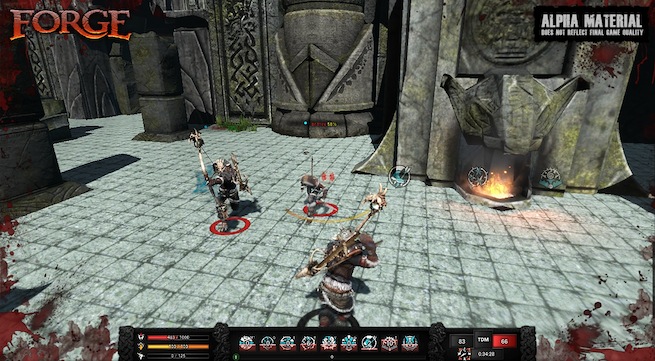 Dark Vale Games is like the Gordon Ramsay of independent video game developers. The studio took two industry staples — massively multiplayer online role-playing games (MMORPGs) and first-person shooters (FPS) — trimmed the fat, added its own special spices, and simmered everything under medium heat until the recipe was fit for public consumption.

The resulting dish is Forge, a PC-only multiplayer game set to launch sometime in 2012, which borrows the player-versus-player (PvP) combat from the MMO genre and shoves it into the spotlight.

“Some of us [here at the studio] have worked together for about seven years,” said Tim Alvis, chief operating officer and chief technology officer of Dark Vale Games, to GamesBeat. “We just finally decided to kind of go off on our own and go for it. And [Forge] came from the fact that…we would want to play something together, but we could never get it lined up [in an MMO] to where we were at max level or with the right gear at the same time. And eventually, it just starts to click that you could just kind of get rid of that.”

So the developers did. Gear progression is nowhere to be found in this PvP environment. While you do level up in the game, it doesn’t necessarily make you more powerful, as you only gain additional skills for the classes you use. Statistically, everything else stays the same, including your health and energy bar.

The team also looked at the accessibility of FPS games for inspiration where it’s easier to drop in and out of matches with friends if you only have a few minutes to spare. Together with the complexity of MMO-style combat, which usually consists of utilizing various skills other than directly dealing damage to your opponents, Dark Vale thinks it has found just the right type of PvP game that people could seamlessly jump into whenever they want. 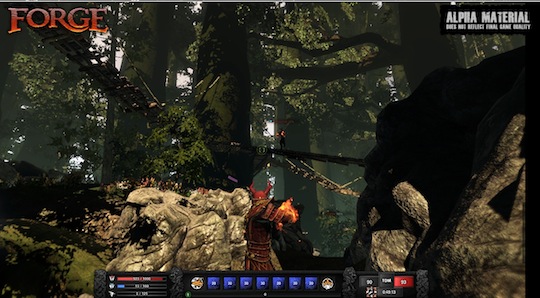 Unlike almost all MMORPGs, Forge doesn’t force you to micromanage dozens of abilities for each character. Instead, your skill bar is limited to only nine slots. You start out with nine abilities per class when you first play the game, but as you gain more skills, you can swap them in or out prior to a match. “We’re making sure that the starting nine are enough to not only have fun but to do everything that a class needs to do,” said Alvis.

All classes are available to play from the outset of the game as well. In Forge’s initial release, Dark Vale will have five classes ready: Pathfinder, Warden, Pyromancer, Assassin, and Shaman. However, if you want a class to look a certain way — to represent one of Forge’s handful of factions — Alvis mentioned these costume changes might require some sort of unlocking mechanism. The faction shown to GamesBeat in the demo (and in the screens below) represents a Nordic-like people who hail from a cold, wintry planet.

A different kind of PvP

As you duke it out in different modes such as team deathmatch, capture the flag, and king of the hill, you’ll find that movement is a huge component to Forge’s combat system, especially when it comes to elevating the fight to (literally) new heights. In one giant map known as Ymil’s Throne, most of the battles take place within a medieval-looking town with wide-open squares along with a bevy of rooftops to escape to. Another area, Forest Ambush, features a tall canopy with wooden platforms and homes that link all the trees together. And a third unnamed level is populated with cliffs and a towering bridge that spans a small chasm.

To help you reach these places, all classes are able to wall jump off of almost any surface in the game, provided you have the right direction and momentum. Some classes augment this jump with their own set of particular skills. The Pyromancer’s Flame Burst propels him high into the air if you aim at the ground. The Shaman’s Spiritual Burden makes him jump twice as high while slowing everyone else down within the spell’s radius. The Pathfinder can swap positions with either friend or foe while disguised with his camouflage ability.

Sometimes, it takes a specific combination of these powers to access obscure areas of a map. And further experimentation with movement can lead to new methods of confusing your enemies as you lure them into vicious traps. 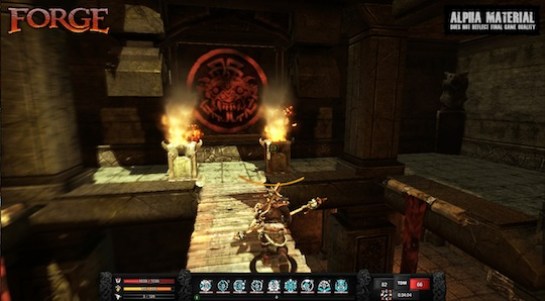 While these classes take a cue from the so-called “holy trinity” of MMO combat — tanks (characters that take the brunt of the hits), healers, and damage-per-second dealers — Dark Vale adds its own twist to these long-standing archetypes.

“One thing that’s kind of interesting in an MMO right now, in PvP, [is that] the healers are the real tanks,” said Alvis. “The healers are the ones that are taking all the damage because everyone is focusing on them, and they have such incredible self-support ability…. So what we’ve done is we’ve actually made the healer not really able to sustain himself very well. He needs to have a Warden with him. And the Warden, the tank, does almost no damage directly…. So the trinity is definitely there, we just actually make it to where your job is tanking if you want to be a tank. You’re not doing limited damage or [taking] part of the kill, but your job is protecting your teammates. You’re almost like a preventative healer.”

Forge is currently in a private friends and family beta, but Dark Vale hopes to release it to the public very soon. The studio is in the midst of its “kick finish” campaign on the crowdfunding site Kickstarter where any money accrued will accelerate the process of delivering more content in the final game, including additional classes and multiplayer modes.