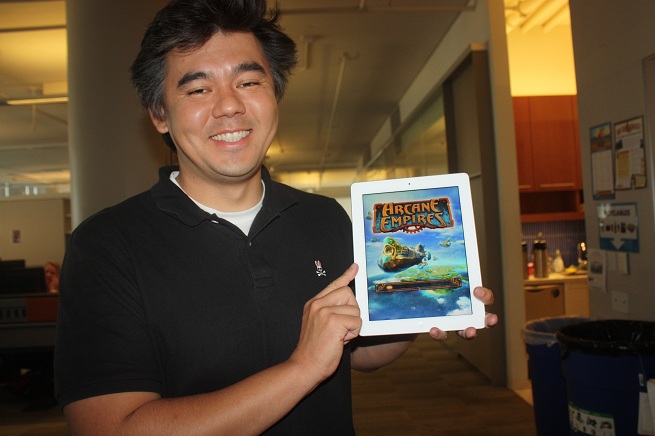 Kabam‘s entry into hardcore strategy games on the iPhone has been a resounding success, as Kingdoms of Camelot: Battle for the North has dominated the top-grossing charts on the Apple iTunes App Store for months. Now the company is launching a new title, Arcane Empires, on both iOS (iPhone, iPad, and iPod Touch) and Android devices.

The move is part of the San Francisco-based company’s attempt to find hardcore gamers wherever they are, on any device or operating system, said Kevin Chou, the chief executive of Kabam, in an interview with GamesBeat. It also shows that the company is making good on its strategy to expand beyond Facebook, the platform where it began its quest to make social games like Kingdoms of Camelot for hardcore gamers. The shift to iOS is one reason why Chou believes that Kabam will grow revenues in 2012 by more than 50 percent above last year’s revenues of around $100 million.

Arcane Empires is a strategy game similar to Battle for the North, but it has a different theme. Battle for the North is for fans of medieval fantasy, while Arcane Empires is based on the “steampunk” genre that blends science fiction and fantasy with Britain’s Victorian era artwork. In the massively multiplayer strategy game, you are part of an epic, civil war-torn world. You have to build a civilization, develop alliances, and wage war against enemies in the hopes of stopping a totalitarian warlord. 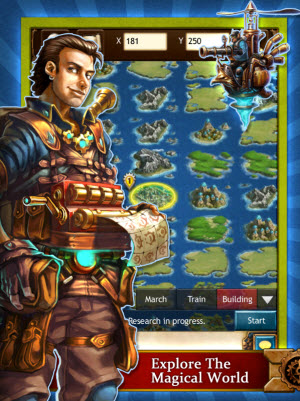 “Kabam blends the art of game design and the science of free-to-play distribution to deliver blockbuster gaming experiences,” said Andrew Sheppard (pictured above), the president of Kabam Game Studios. “Kabam has aggressive plans for strategy games on mobile devices, and we’re energized by the raw potential of Arcane Empires on Android and iOS, right on the heels of Kabam’s blockbuster hit Kingdoms of Camelot: Battle for the North.”

Arcane Empires is available to play in English, French, Italian, German, Spanish, and Portuguese. Chou said that most of Kabam’s revenues last year came from Facebook. But after Facebook imposed its 30 percent fee on developers by requiring them to use the Facebook Credits virtual currency, Kabam reevaluated its strategy. It found that many hardcore gamers don’t play on Facebook, and the cost of acquiring them was climbing.

Meanwhile, Kabam diversified to iOS, Kongregate.com, Google+, Amazon, Kabam.com, Steam, and other platforms. Now more than 70 percent of Kabam’s revenue is based on platforms other than Facebook, said Chou. Kabam has used the added revenue to expand to more than 550 employees.

Sheppard said the company made the Arcane Empires game at its studio in Beijing, which is focused on mobile.

“This is an original intellectual property with a contemporary story,” said Sheppard. “It has a lot of social features and beautiful art.”

The launch on Android suggests that Google’s mobile operating system is becoming more important as a game platform. This title is more open to female audiences and the general mass market, said Sheppard.

“Free-to-play games are creating incredible disruption, and we’re the main company that is moving across platforms to take advantage of it,” he said. “We are distribution and platform agnostic.”

But Chou said the company is not pouring as many resources into Facebook now because it doesn’t feature games in a prominent way, in contrast to other companies such as Amazon, Apple, or Google.