Like every year, the NFL’s biggest game led to a number of memorable commercials. A trio of video games spent the millions of dollars required to get some airtime during the Super Bowl, and even the worst of these is benefiting from that investment.

Mobile game developer Ucool spent $2.25 million to air a 15 second ad for its Heroes Charge game during the Super Bowl — and people hated it. It was the lowest-rated commercial out of all 61 spots that aired on that Sunday night on NBC, according to a USA Today Ad Meter poll. Developers Supercell and Machine Zone got much better responses from viewers for their ads that featured Liam Neeson playing Clash of Clans and Kate Upton as a Game of War goddess, respectively. But it looks like having the worst-received Super Bowl commercial is better than not having one at all, as Heroes Charge got some positive results its ads. With mobile games generating around $25 billion in 2014, it’s not too surprising that Ucool would try to make make a push to get a bigger piece of that action.

“We were hoping to quickly bring broad national awareness to Heroes Charge,” Ucool chief marketing officer Tony Cerrato told GamesBeat. “[And we wanted to] generate a surge of new players and also to shine the light on our studio. [The ad] did that and then some.”

On Jan. 31, the day before the Super Bowl, Heroes Charge was the 899th most downloaded iPhone app in the United States, according to App Annie. The next day, after the ad went live in front of millions of people, it shot up to 252. It’s doing even better when it comes to making money.

Cowen & Company analyst Doug Creutz noted he could see why Supercell and Machine Zone bought ads, but he was a big surprised by Ucool spending the money.

“[Supercell and Machine Zone] make sense to us given the success and reach of their brands and their male-skewing audiences,” he wrote in a note to investors. “The Ucool spot seemed a little more questionable; however, Heroes Charge has moved up from being the No. 49 top grossing game into the top 20 since the ad aired, so the spot does appear to have had an impact.”

Heroes Charge is up to No. 21 on the top-grossing chart in the U.S., according to App Annie. And it has consistently moved up that list since the Super Bowl ad. 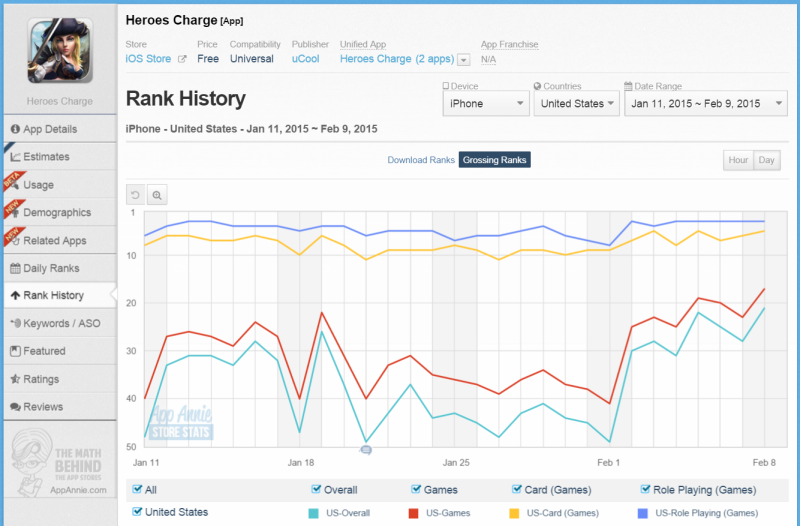 Both Game of War and Clash of Clans have seen similar boosts. But both of those games already had a higher position on both the download and grossing charts, so their moves were less drastic than Heroes Charge’s.

As for the ad failing to make a dent in the USA Today Ad Meter poll, Cerrato understands why people were happier with the other commercials.

“We realized that we did not put together what can be classified as a ‘Super Bowl commercial,'” said Cerrato. “We edited down a more robust 30 second commercial to 15 seconds, and we focused on the game and character interaction instead a celebrity like the others.

“The well-received Super Bowl commercials were either a combination of being funny, sentimental, sexy, or spectacular. The top commercials contained one or more of these traits and they were localized for the audience. This is a lesson learned and we hope to be able to take this into consideration next year.”

The company is definitely considering the possibility of running another ad during next year’s Super Bowl. But Cerrato said the team would definitely put more thought into it and that they would likely go with an outside marketing firm — although that doesn’t mean he is displeased with the results from this year’s effort.

“Well, it’s kind of like being Left Shark,” he said. “There’s no denying his dance moves were off. We received a great response from the commercial.  It did its job of generating new players.”