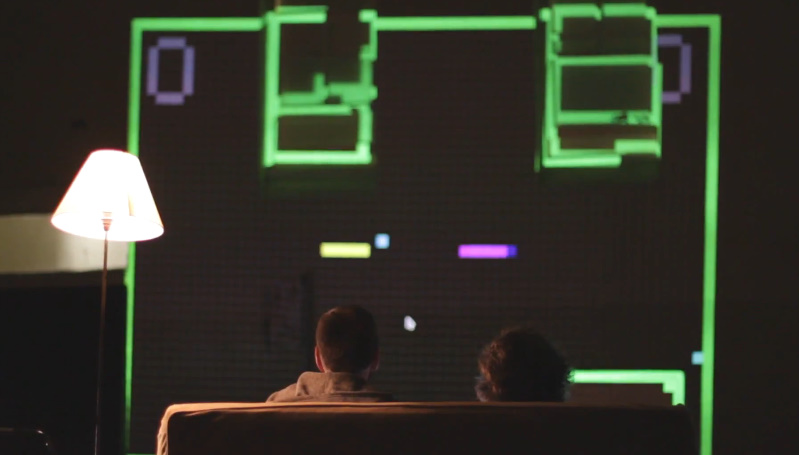 An imaginative projection project in Sydney, Australia, is taking the classic game Snake and making it into an large scale interactive urban experience.

The Snake the World project uses projection mapping to create custom games on the fly, with anything from architectural features to passing pedestrians forming part of the game environment. Windows, doors and signs become obstacles and boundaries, and pixels in the game react to them appropriately.

The game allows two players to battle it out in the improvised arena, with a Tron-like competitive element, where one player can block the others’ path to win. 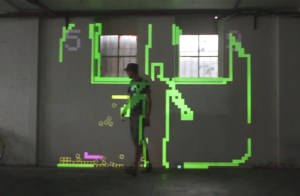 Mobile Projection Unit (MPU), the collective behind the project, comprises three members, all of whom are media artists and computation designers. According to MPU member Rene Cristen, computation design is “basically just creative coding”.

Speaking about the project on MPU’s explanatory video, Cristen says, “Snake the Planet… is a way that we can cruise around the city and pick out walls to just scan and throw up a game of snake on. Basically we’ve got a camera, a projector, and a computer, all powered from a portable battery. We just scan the counters of the building, or whatever happens to be passing in front of the camera at the time, and we automatically build our levels from that.”

The camera being used is apparently pretty standard. Cristen explains, “We try and get a nice clear image from the lens and basically try and analyse a high contrast black and white image from that.” This image is then used to extract individual shapes, using a process called blood detection, which “will work for any features on the building like windows or doors, but it will also pick up anyone walking in front of the camera as well.” 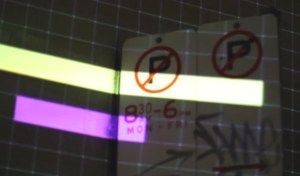 According to Cristen, the most fun part of the project is the guerilla element of just rocking up to a public space and having the game set up in a matter of seconds.

“Culture is as much about the feeling of experiments as it is about the council sanctioned public sculpture, so it’s kind of why were really excited to be able to take all these little quick experiments and games out to the public.”

The software powering Snake the Planet was created using OpenFrameworks, and MPU will soon be distributing it freely as open source.  The group is also planning to develop the work into an iPad application, for other artists and designers to adapt and use in their work.

You can watch Snake the Planet in all its glory below.