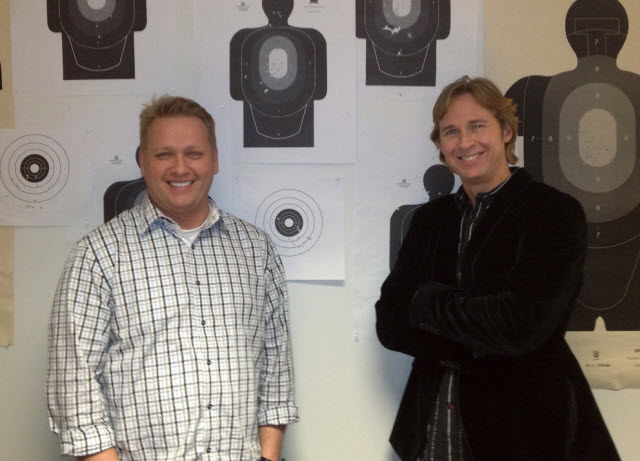 Former Activision and Call of Duty veterans have started a new video game studio called U4iA Games. Their aim is to bring hardcore games to social game platforms, from the web to Facebook and mobile.

The Bellevue, Wash.-based studio is making an online-only hardcore free-to-play game that it calls a “first-person social game.” The company founders are Dusty Welch (pictured right), chief executive officer, and Chris Archer (pictured left), chief creative officer. In their careers, they have worked on games such as Call of Duty, Doom, Guitar Hero, Spider-Man, and Tony Hawk’s Pro Skater.

U4iA (pronounced “euphoria”) believes that there is a new segment of players emerging: the hardcore social gamer. Facebook game creators Kixeye and Kabam have already discovered this. But Welch said in an interview that his company aims to shoot even higher on the quality bar, creating AAA-quality games along the lines of what Riot Games, creator of League of Legends, has done for web-based combat games. China’s Tencent acquired Riot Games earlier this year for nearly $400 million. League of Legends is a fast-action combat game that uses the free-to-play model, where users play for free and pay real money for virtual goods.

Welch believes that hardcore gamers are wholeheartedly embracing that model and are more likely than other players to actually purchase something in a game. That model enabled Kabam to raise more than $130 million and hire more than 400 people. Welch believes that, like casual gamers, hardcore players are moving to new platforms such as social networks and mobile devices.

Given the huge numbers being bandied about, it’s no surprise that U4iA has raised money. The company has raised $1.5 million in seed funding and has 14 employees. Archer believes that people using social networks and mobile devices deserve great games just like anybody else and says those games haven’t been made yet.

“Many studios are making casual games for a core audience,” Archer said. “We’re making core games for a social audience.” Welch added, “We think the hardcore gamers are going to start looking for the core games on the social and mobile networks now.”

U4iA got its start earlier this year after Sony Online Entertainment shut down several studios, including the Seattle studio that Archer was running (they were making an online game called The Agency). Archer and Welch got together and started their new company.

Archer and Welch have created, designed, produced or marketed more than 50 video games that have generated more than $4 billion in revenue. Welch was a co-founder of the Call of Duty franchise. Years ago, he saw the movie Saving Private Ryan and felt like the game Medal of Honor, published by Electronic Arts, failed to capture the excitement of the film. So he conceived of Call of Duty and contracted Infinity Ward to create the first title, aiming “to kick the snot out of EA.”

After that, the series took off and is now the best-selling video game franchise of all time. While at Activision for 13 years, Welch also worked with id Software, the Soldier of Fortune title, and the Guitar Hero group.

Archer is a 20-year game development veteran and has produced more than 40 games across a wide variety of platforms. He helped create titles such as True Crime: Streets of LA, the Spider-Man movie games, the X-Men Legends games, 11th Hour, and Powerslave.

The company’s first game is in the works and will be announced later. Besides Kabam and Kixeye, rivals include Valve, Nexon, and Neowiz. U4iA is using the Unity 3D engine to create its games for the web, mobile devices, and social networks. Investors include ABR Capital and several executives from top game publishers.

“We think we’re at the spearhead of a lot of cool things,” Welch said.