John Riccitiello made his first extended speaking appearance this week at the Casual Connect game conference in San Francisco, revealing his views on the broader game industry for the first time since he resigned from Electronic Arts in February.

Riccitiello ran EA from 2007 to 2013 during a tumultuous time that included the rise of social games and the ascendancy of mobile gaming. He cut EA’s fat, expanded it with big acquisitions such as the $750 million purchase of PopCap Games in 2011, and then contracted again as he prepared the company for a transition to digital games. He put plans in place for the next-generation consoles and put EA on track to pursue Activision Blizzard’s flagship Call of Duty game with the Battlefield series. In this interview, Riccitiello revealed his post-EA opinions on the console transition, the role of publishers in mobile, and creating value in the game business.

Here’s a transcript of the interview between Riccitiello and game journalist Jon Gaudiosi.

John Gaudiosi: I wanted to start by getting your thoughts on the industry today. It seems like there are a few big winners in mobile – Supercell, Gung Ho, King, EA, Kabam — and everyone else trying to chase them. How do you see this evolving in the next year? 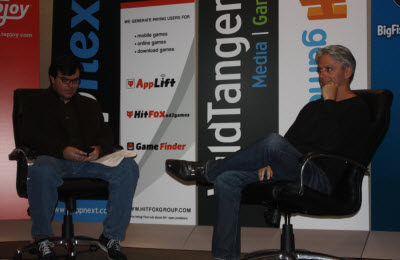 Above: Jon Gaudiosi and John Riccitiello

John Riccitiello: Like any form of media, there are players at the top of the charts. You named the five that are leaders globally today. One of the things that I found frankly shocking is how long titles stay in the top 50. Whether it’s Clash of Clans or DragonVale or some of these poker games or Candy Crush, they’re holding out for 100, 200, 300 days.

What I find fascinating is a couple of things. My first observation is that with the rarest of exceptions, no one’s gotten more than two games in the top 50. It’s one, it’s two. EA might have a few more than that. But it’s not a huge number of games in the top 50. Second thing that I’m noticing is that there’s almost nobody who has ever put up a mobile game that lasts longer than year in the top 50, and there’s never been a sequel that’s bigger than the first.

What that leads me to believe is that they’re either going to get lucky twice, or they’re going to have to figure out an answer that I think is vitally important for the health of the mobile business long term. Which is simply this: They need to build brands. Will Clash of Clans be with us in 25 years? This is Madden’s 25th anniversary. Will Candy Crush be around next summer, through the fabled IPO, and still be doing a couple of million dollars a day? Will they figure out how to do a 2.0? I see precious little going on right now in mobile to suggest that people are building multi-year franchises or multi-year brands.

Every form of media births some great brands. Digital animation brought us all of the great titles from Pixar. Originally animation brought us great brands like Mickey Mouse and Disney. Radio brought us CBS. Console gaming brought us EA, Nintendo, Activision, and brands like Call of Duty and Mario. What are going to be the great brands that the mobile players bring forth? I think we see them now, but right now — just in my judgment — you stop paying for a game or playing a game when you’re ready to throw your iPhone or your Android device through a window in frustration. You’ve been lifetime optimized so well that it can get pretty darn frustrating.

I’m waiting to see people figure out how to do that 2.0. Right now, we have those five super-talented companies. Others are going to challenge them. The big question for whether they stay at the top is whether they can get lucky again – which I wouldn’t bet on over and over again – or whether they can take their brands and make them sustain over multiple years, where consumers are familiar with the brand and they want to see it again. They want a 2.0 or a slightly different game. They’re expecting consistency on intellectual property and consistency on gameplay mechanics, plus fundamental improvement — newness, something different – that will bring them back over and over again.

Gaudiosi: When you look at the industry today, the top 50 titles seem to garner the vast majority of revenue in mobile. Will this trend continue?

Riccitiello: If you actually do the math, position number one is essentially a $1 billion business. Position 50 is about a $10 million business. It’s a pretty fast drop as you work from one to 50. Personally, I think that with mobile growing rapidly, we will see two billion-dollar brands at the top of the charts, a lot like console.

What’s going to be fascinating is that with all the increasing resources going into gaming, I’m betting that the 50th position will remain pretty close to that $10 million business. After you finish building the game, supporting the live team, paying for installs, and all the things you need to do, the bottom of the top 50 chart is going to be pretty close to breaking even.

In almost every form of media, we’re seeing a fight toward the top. The top movies get a much higher share of moviegoer dollars than ever before. The top television programs get a higher market share. At the World Cup or the Super Bowl, they’re getting record performances. Anything else is getting crushed. My belief is that the top 50 is where it’s at, and it’s going to be cutthroat.

Now we’re seeing a lot of me-toos. People are saying, “I’ll make Puzzle & Dragons, but make the circle into a diamond.” Or take Bejeweled and turn the jewels into fruit. Wouldn’t Clash of Clans be really cool if they were space invaders instead of Viking-ish? That level of innovation isn’t going to work from this point forward. We’ll only see a couple more shakes of that. Fundamental innovation is going to drive it, and realistically, the top 50 is going to be hard to crack, and it’s going to be where all the resources are. It’s going to become a go big or stay home market and stay that way.