Golem is the brainchild of Highwire Games, a Seattle startup from video game industry veterans who hope to create one of the flagship games for Sony’s PlayStation VR platform coming next year.

Sony showed off a trailer for Golem at the PlayStation Experience (PSX) event over the weekend. In the demo, a young woman confined to a room makes various motions with her body. It becomes clear that she is controlling a creature, known as a Golem, in a fanciful world. It’s not much of a revelation, but Highwire Games has been working on the PlayStation VR exclusive for some time.

Highwire’s founders include former Bungie music and audio chief Marty O’Donnell, former Bungie game designer Jaime Griesemer, and former Airtight Games techie Jared Noftle. They’ve put together a small team to build VR games, and they showed up at PSX to offer a glimpse of what they’re working on. I was one of the first game journalists to try out the new game using the PlayStation VR platform. I donned the VR headset and was transported to the room in the video.

At the outset, I was a tiny creature on the floor of the room. I leaned forward in my seat, and my character moved forward. I leaned to the right, and my character turned right. Then I was transformed into a big Golem. I stomped forward into an arena, where I met a much bigger sword-wielding Golem. I proceeded to have a sword fight with the creature, blocking his moves one for one with by waving around a PlayStation Move controller. The game has something to do with the Jewish tradition of the Golem, but the team isn’t saying more on that yet.

Afterward, I interviewed O’Donnell, Griesemer, and Noftle. Here’s an edited transcript of our interview. 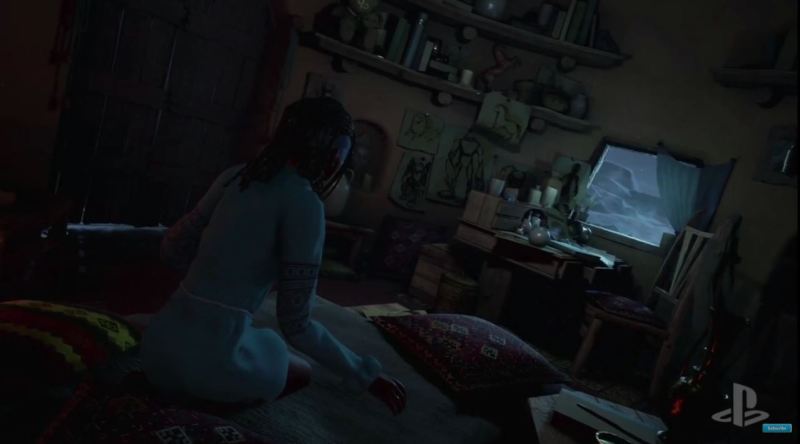 Above: Golem is a PlayStation VR title from Highwire Games.

Marty O’Donnell: I feel like it’s a really fun new world for us, but it’s not going to be for the faint of heart. The first adopters are going to have an interesting time.

Jared Noftle: It’s going to build up. We’re not going to throw people into fighting golems like that right away.

O’Donnell: Well, I mean for VR in general. It’s going to be hardcore people at first, and then it’ll start to spread.

GamesBeat: How long an experience are you thinking about?

O’Donnell: It’s not a super long story, but it’s going to be story-based. We’ll be gentle about the VR especially. We’re not explaining everything it’s going to be yet. For instance, there’s a character in the game who’s a woman, but you’re not necessarily playing as her yet. You’re playing as a character who we’d say is genderless. If you want him to be a boy, he’s a boy. If she’s a girl, she’s a girl.

Noftle: But the other girl you saw in the trailer is your sister, in the fiction.

GamesBeat: Is it single-player for sure?

Noftle: Single-player for sure, yeah.

GamesBeat: How much did relearning did you have to do as far as how to make a game for VR?

Noftle: There’s a couple of ways to answer that. We’re developing in Unreal Engine 4 and a lot of the guys hadn’t used Unreal before, so that was a learning curve for a lot of us. I have a lot of UE experience, so it wasn’t as big a deal for me.

From a design standpoint, the good thing about Jamie, and to a certain extent Marty, is that they approach design – especially Jamie – from a very controller-specific point of view. We’re in VR-land now. How is that going to control? That was his first thought as far as how to develop a VR game. That’s what helped us get the initial navigation implemented.

O’Donnell: All of this stuff is going to be fine-tuned as we develop, but the reason we stop you as you lean too far forward or do too many violent moves with your body—We’re concerned about people’s safety. You’re completely enclosed. You can’t see anything else. We don’t want you standing up and walking around the room and stepping on your cat or crashing into the couch. We want you to be comfortable in a chair or on the couch and be able to play this game.

The guy today, the London Heist guy, was saying that people take the two controllers that are their guns and then they put them back on the desk in front of them. Of course, there is no desk there. What’s good about that is that people start to believe this stuff is really there. But safety is a concern.

GamesBeat: What do you think of the startup life?

O’Donnell: The cool thing for us—just making a trailer like this. “What’s the idea? That’s a cool idea. Let’s start moving down that road.” There’s no committee. There’s no hierarchy.

Jamie Griesemer: No approval chain. No everybody putting in two cents.

O’Donnell: No outside marketing team.

Griesemer: Everyone on the team is a veteran. They’re the best at their job. It’s pretty effortless.

GamesBeat: Did you start with VR in mind, or did you experiment for a while and decide this was the way to go?

Noftle: Right from the earliest conversations, we had our sights on VR.

Griesemer: My thought process, at least, was that I need new design challenges, or else I get bored. You don’t want to play a game designed by a guy who was bored. We were also interested in being the game on a platform. That’s our background — being on the game everyone associates with the platform, being in the launch mix.

VR was where all those things intersected for us. It’s the future. It’s not going to be an overnight takeover. You’re not going to be seeing a bunch of living rooms with no TVs and three headsets by the couch, not for a while. It’ll be a slow burn. But when it does grow, we’ll be there growing along with it.

GamesBeat: Do you have more freedom? [O’Donnell clashed with his superiors at Bungie and Activision over the publishing of a trailer and the music from Destiny, which he worked on before getting into a legal fight and then resigning to start Highwire].

Griesemer: Too much freedom. Freedom definitely comes with a bit of uncertainty.

Noftle: You have to be disciplined.

Griesemer: If somebody says, “Do this and here’s the money to do it,” that’s one thing. But if you’re going to do your own thing, you have to find some way to pay for it.

GamesBeat: Did you go in thinking that you’d have a learning curve to get through on VR before you’d start making the game?

Noftle: The way it played out was fortunate for us. We were given a period to do some experimentation initially. We were able to try a lot of different things.

Griesemer: Probably six months of prototyping in a lot of different directions.

Noftle: Whether or not we planned it that way, it was very valuable to have that playtime, so to speak.

O’Donnell: Sony’s been great for us. They’ve been very encouraging.

Griesemer: They know it’s not a solved problem. They don’t come to us and say, “We know how to do it,” because nobody knows how to do it. They don’t say, “It’s gotta be done right now,” because they know it takes time to polish it and make it great. They’ve been the best partner we could hope for.