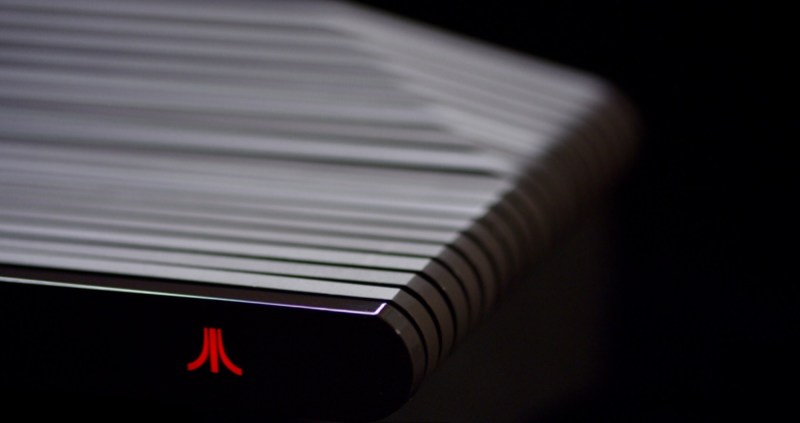 Above: A new image of the Ataribox prototype.

Mac: Content is one of these things where—a lot of people would love for us to give a list of titles right now, and we’re not going to be doing that today, although we’re doing that soon. When we look at content, though, there are a few different buckets we’re going after.

Obviously, retro games. We’re going to have a massive Atari back catalog on there with an emulator, but we’re working hard to make sure there’s more than just Atari. There will be some surprises. There are a lot of these closed retro boxes where you get 20 games or whatever, but this is in the hundreds. Also, we’ll let people bring more, bring their own ROMs, bring their own games into that section and build up more content.

From an indie game point of view, there are some titles we really want to have there at launch. We want to have games we can build a community around. One of the beauties of this platform is it’s so easy to jump around from the game to YouTube to Discord to Skype in the background, all that stuff we mentioned earlier. We want to create community around this. People who are looking for new games aren’t just trying them out. They can go to their community. We’ll have a section with a number of titles we’re trying to build community around.

We’re also going to have a very open section where people can just load up their content. The thing about Linux and x86 is it’s not very hard for game developers to port over, because it’s such an open standard. We have one good example, a sports game where the developers hadn’t done a Linux version, but they did it in Unity. In 24 hours they gave us a Linux version. They said, “This plays better than the Mac version, and we’ve been working on that for eight months.”

The way we’re structuring the hardware and the software — and also commercially, by taking away barriers for loading software on there – it’s going to be so easy to put content there. It’s not a question of why. It’s a question of why not. That’s how we want it to make it for these guys. And we want to see people who’ve never developed games before get inspired to learn and put content out there for the first time. And not just have people load up games and leave, but also have discussion and community-building around all of that. 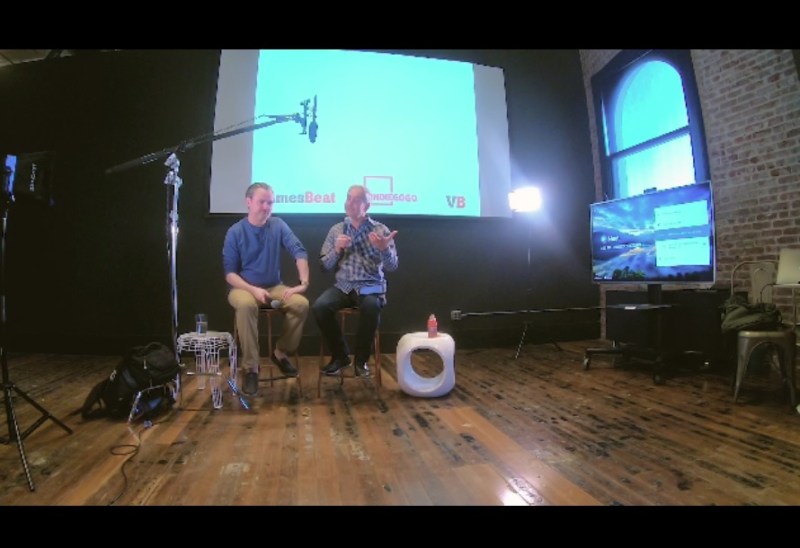 Fries: I remember making the rounds of developers and publishers, trying to get their games on our platform. But now anybody can make a game with these tools.

Mac: That’s exciting, right? To put barriers in front of those people, commercial or otherwise, that doesn’t make sense. To your point earlier, the TV has been with us for so many years, but there’s still this huge opportunity to break through and create this wave of content there. I hope that what we’re doing is going to make it easy for people to do that.

Fries: The big publishers are still there. If I want to play Destiny, Call of Duty, something like that—will you be visiting EA like I used to do?

Mac: It’s back to the sort of Pepsi-Coke analogy. We’re not trying to be another cola. We’re trying to do something very different. We’re not putting any big focus on triple-A. There’s more than enough other content out there to make this great. Hopefully we can set it up in such a way that more and more content will come and be developed over time.

Right now, we’re not looking very strongly at that. We think we have more than enough great value to bring to this based on the strategy that I already outlined. It’s great stuff. Everyone involved in the project is a gamer in one way or another. There are going to be a lot of people who have their $3,000 PC rig in one room of the house, but the TV is different. It’s a more social area. After binge-watching something on Netflix maybe I just want to dip into the retro world for a while.

We’re not going to try to be everything to everyone. All those other companies and devices you mentioned, they’re awesome. For some people that’s all they’re interested in, and that’s great. One of the challenges we have in what we’re focused on—so many people are excited about what we’re doing. Our job is to focus on building the best product we can for that group of people. That’s what we’re going to do. We can’t pretend to be everything. We have to go after that group.

It’s a challenge. There’s a lot of critics out there. If we were to build an FPS game today and put it out there – on Android, say, for argument’s sake – you’d have two or three groups that would critique it. People who are into that kind of game, people who are into Android, maybe.

When it comes to Ataribox, though, we have so many groups of people that have different views of what it should be. There’s the design community. The 2600 was iconic, but—it’s like the Volkswagen Beetle. There are hardcore Atari fans who still play their retro games today and want to be able to do stuff with this. We’re doing some pretty cool stuff that we haven’t announced yet in that area. You have a lot of people who just remember Atari from when they were kids and want to relive that. You have the Linux community. You have indie gamers.

There are multiple communities who have an opinion, some who love it and some who are questioning it. When you’re building a product, it’s easy to get drowned in those voices and listen to everyone. But you need to separate—there are groups where this isn’t for them. That’s okay. We have to focus on the people who do want this and build the best possible product for that group of people. That’s what we’re going to try to do. 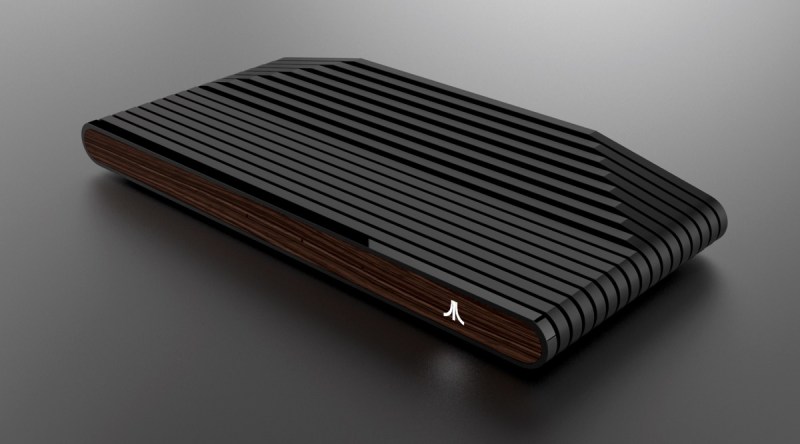 Above: Atari shows off the first image of its console.

Question: When is it going to release?

Mac: We can’t say yet. The campaign is going to go live this fall. We haven’t announced the date. It will be coming very soon. Before Christmas, you’ll see the campaign out there. From a shipping point of view, we’re saying spring.

We’re already pretty deep on the production side as far as how to build it. When we go live with the campaign we’ll give a lot more specifics on delivery and who’s going to build it on and so on. It’s a very short timeline.

One of the other things about Indiegogo that was very important for us, to be serious, is a huge international presence. Indiegogo is in, what, 200 countries? The Atari brand is known everywhere. You’ll see after the campaign that we’re doing a lot online. Retail, we’ll see when and how we do that later. It’ll be step by step. We have a very specific plan. Hardware–physical problems, certifications, build, firmware, BIOS, operating system, content, it’s everything. When you think about retail, returns, point of purchase, you have to be nuts to try to do hardware. It’s one of the hardest things to do, even more so from the ground up. So we have a step by step plan.

Question: A lot of things could happen by spring. What response might you have to things like a price cut for existing consoles, or a more plentiful supply of Super Nintendo Classics? What about competitive pressures?

Mac: There are always going to be things that might happen. We’re not going to pretend to know how we’ll react. But right now, when we look at the landscape of gaming consoles, retro gaming devices out there, streamers, Android-based devices, we feel our positioning is a bit different for all the reasons I’ve laid out. Hopefully that will limit—even if that happens it doesn’t dramatically change our use case. I hope that wouldn’t disrupt our planning. We’re pretty fixed. We’re going into crowdfunding to have our community be a part of this — not to try it out, but for them to be actively involved. We’re confident about sticking to our plan.

Question: Looking more long term, we’ve seen platforms like Xbox add new features as new technologies arrive. With things like AR and VR on the horizon, how do you think this is going to change over the years?

Mac: Because of the architecture and the approach, as this stuff evolves, we hope it will be easy enough for us to adapt and roll in new opportunities over time. AR and VR, it’s happening. The speed at which it’s happening—you have expensive VR for the living room and mobile VR that’s less so. We’re looking at some stuff in that space already. We’re already thinking about it, even if we can’t say much. We’ve built in a lot of room for input devices, whether it’s Bluetooth or USB. This device is going to have a long life with a lot of potential to integrate things that come along.

AR and VR, that’s all going to happen. You’re going to see more from us in time. We have an architecture that will allow us to adapt and do more interesting things over time in those spaces. That’s one of the more vague answers I’ve given today, but it’s happening and we’re a part of it.

The thing about what we’re doing here—Atari is a classic, well-known brand. But this product is about the future. We didn’t set out to re-create the past. We’ll have some great historic stuff on there, great retro titles on there. We’re looking at devices that will do some cool stuff around that. But we’re also building a product and an architecture for the future. There are a lot of other paths we’ve taken, and we have other products like Flashback that offer some of that. This is about the future. You’ll see it integrating new things and evolving over time. We hope this is the start of a long-term road map that we’ll follow step by step.