Big Fish Games has partnered with a veteran developer team in Texas to publish a new mobile game called Dungeon Boss. The title will take Big Fish, known for its casual games, into a new genre of hardcore dungeon-fighting with rich 3D graphics.

Boss Fight Entertainment, based in McKinney, Texas, intends Dungeon Boss to be a triple-A-quality title with collectible features, fast and furious gameplay, and battles with epic bosses. Boss Fight wants to lure new players into the genre with retro-styled 3D graphics. The game also targets experienced role-playing game fans with depth of strategy and choice in hero powers and team-building features. They can compete against other human players in player-versus-player environments. The title has cute characters and tongue-and-cheek humor — something that Boss Fight appeared to learn from creating CastleVille for Zynga.

“With Dungeon Boss, Big Fish has a really unique opportunity to bring our casual audience insights and mobile distribution strength to a role-playing game that might mistakenly get classified as ‘midcore.’ ‘Midcore’ encompasses a lot of complicated mobile games that small groups of hardcore gamers enjoy while studying a Wiki to figure out how to play,” said Chris Williams, the general manager and vice president for Big Fish.

“After 12 years of catering to the casual gamer, Big Fish knows what works for a mainstream audience. By partnering with seasoned and highly skilled developers like Boss Fight Entertainment, we’ve positioned Dungeon Boss to be a deep and immersive RPG experience that is approachable and rewarding for all.”

Bill Jackson, the chief creative officer at Boss Fight, said, “We started Boss Fight with a mission to make the type of games that we love — games that reward the player with depth and strategy yet are still simple to pick up and play. Dungeon Boss is a beautiful role-playing game that you can spend many hours exploring, but it’s also the perfect companion when you only have a few minutes.” 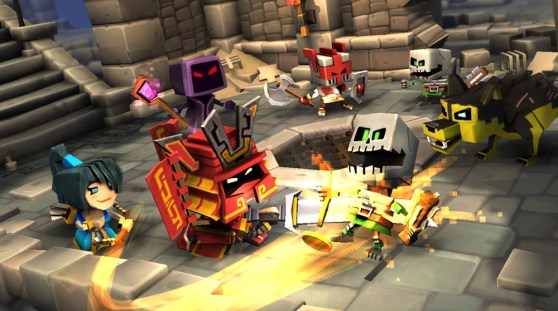