The iOS version of Fortnite has been a big hit, with the mobile battle royale game earning $300 million in 200 days, according to market analyst Sensor Tower since its launch on Apple smartphones and tablets March 15.

Fortnite is also available on the three major home gaming consoles (the PlayStation 4, the Xbox One, and the Nintendo Switch) and PC, and the free-to-play battle royale mode has turned the game into a global sensation. Its season pass model, which has players spend real money on a progression system that unlocks more cosmetic items as they play, has helped Fortnite become an earnings machine. Season 6 launched on September 27, and the iOS version grossed $20 million alone in the week after its launch.

The roadmap here is clear: Make a game that grabs players and put it on every device that can run it. But while that may sound simple, Fortnite’s success stands out because it’s really the first video game to have accomplished this, with a nod maybe to Tetris.

As a comparison, famous mobile hit Clash Royale earned $228 million in its first 200 days on iOS. And that figure excludes revenues from China (Fortnite iOS is not available in China). 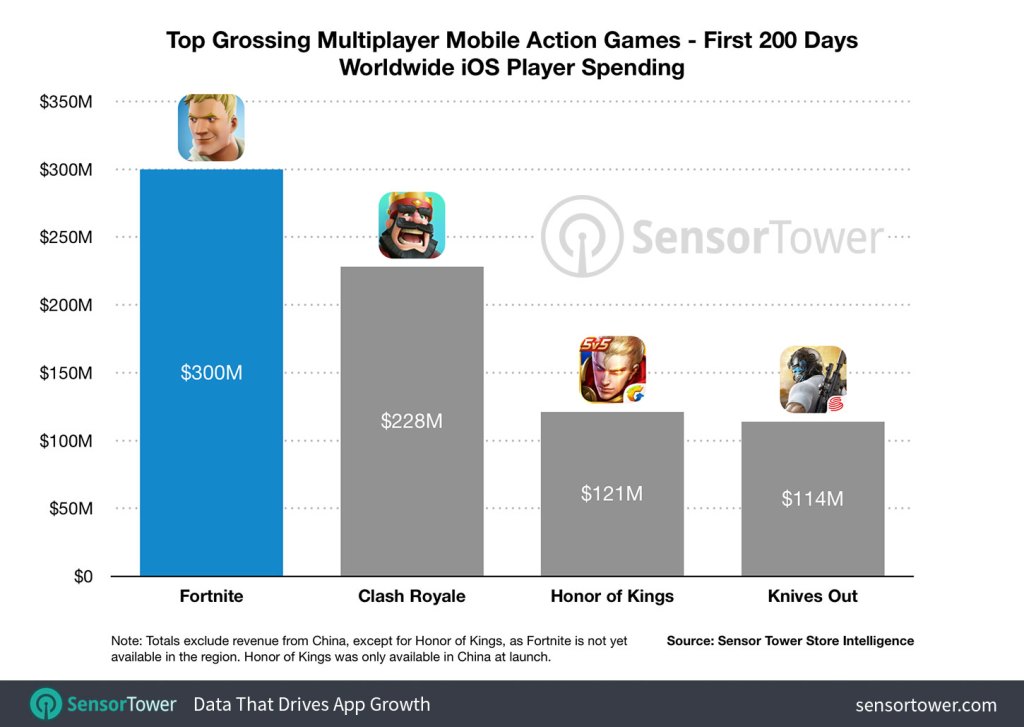 Above: Info from Sensor Tower.

About 65 percent of that $300 million comes from U.S. Meanwhile, the Android version of Fortnite, which has only been out since August 9, has earned over $60 million.

Fortnite iOS is also tracking ahead of PUBG Mobile. PUBG is the next most-popular battle royale game. Its iOS version has earned $47 million since launching on March 19.