Forza Motorsport’s developers are so adept at multitasking, they made their last two titles at the same time.

In total, that means Forza Motorsport 5 has been in the works for the better part of three years. Turn 10 Studios game director Dan Greenawalt brims with confidence when he details the polish, care, and research that went into the Xbox One exclusive, but he’s especially careful to remind us how much of a head-start his team needed to make their deadline.

That’s especially risky with the Xbox One, to boot.

Owing to the fact that the Forza franchise is a relatively young series, Turn 10 Studios has never had to push a title in time for a major console launch. The original Forza Motorsport was very late into the Xbox’s lifecycle, and Forza Motorsport 2 launched a comfortable 18 months behind the Xbox 360’s debut in November 2005.

Forza Motorsport 5 is a very different race, however, and to get things right, Greenawalt’s team had to present the highest-quality visuals and physics technologically possible from this game.

That meant working on it as early as possible, and Greenawalt noted that a lot of the groundwork for Forza 5 started with advanced concepts that couldn’t fit under Forza 4’s hood: advanced road physics, suspension tweaks, simulated tire pressure, and plenty more.

Judging by our recent demo at Microsoft’s Xbox One event in San Francisco, Turn 10 Studios has fit plenty of that in into their first console launch title, passing their own tests with flying colors. Forza Motorsport 5 looks sharp, feels great on the various tracks, and just as importantly, does a fine job upfront of showcasing the power in its home team console’s hardware. 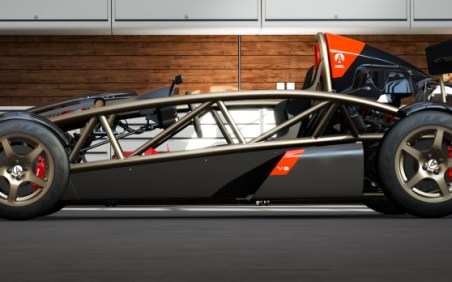 Above: Turn 10 Studios worked on many features that Forza 4 couldn’t handle due to hardware limitations. Those elements are now pillars of Forza 5.

Greenawalt says that over 200 cars will complement the final release, in addition to 10 extra cars per week with DLC, and the handful I drove (including the Mazda RX-7, a personal favorite) looked incredibly sleek on close-up inspection. You’ll barely see a hint of pixels anywhere, something that’s far move impressive under the diverse lighting conditions in the game. Forzavista is also one of my favorite features out of the box, especially when “imploding” certain racers to see their inner workings underneath the hood.

Many more details become apparent close up when you’re on the track. If you’re a seasoned professional, vehicle damage is something you never want to see after a race if you can help it, but a more casual racing fan like myself actually likes to see the spiderweb cracks on a windshield after slight bumps. It’s a real treat to see those scrapes and dents, because most damage hardly looks the same from race-to-race.

Of course, it’s always preferable to race like a sane person, and Forza Motorsport 5’s new Drivatar feature may be one of the most rewarding things about cutting your lap times.

It only took three events for me to create my Drivatar — a personalized A.I. driver built up from your racing data — and I’m instantly regretting that I couldn’t put better driving habits into it. Thankfully, Greenawalt assures us that certain griefer-like behaviors are automatically scrubbed out of the saved data, but knowing that those bad driving habits are out there in Microsoft’s cloud makes me want to do better.

Besides, a better Drivatar only benefits you. As it fills in racing spots against other opponents online, it’ll bring you back valuable credits depending on its performance, so a bad Drivatar is really a bad investment for your virtual garage.

The Drivatar cloud contains roughly 400 people right now, but when Forza Motorsport 5 launches alongside the Xbox One on November 22nd, the online competition will be much stiffer. As a result, I’ll be a little more invested in properly taking hairpin turns, rather than just sideswiping every single other racer on the track halfway through the corner.