The video game industry is a gargantuan force to be reckoned with. It brought in $108.4 billion in revenue in 2017, eclipsing the combined total of global box office sales and the revenues of 20 professional sports leagues worldwide that same year. Sadly, where there’s money there’s also fraudsters looking to cash in; with 47 percent of the world’s 2.2 billion active gamers spending money while playing, gaming is rife with opportunities for scams.

Fraud is disruptive to players and detrimental to game developers. A developer with a reputation for putting out games that become infested with fraudsters will quickly find their playerbase shrinking as players get fed up with being scam targets and feeling as though the developer isn’t doing enough to protect them.

Younger gamers (18 – 24) are especially vulnerable to fraud and are the least likely to notice when their accounts have been hacked, giving cybercriminals ample time to make repeated fraudulent purchases using the victim’s credit card. But even older players can get blindsided by in-game scams they weren’t expecting or get ripped off by a fellow player they thought was trustworthy. Below are real-world examples of some of the most common types of fraud in gaming.

ATO: What’s yours now belongs to a hacker

Account takeover (ATO) is a very common tactic for fraudsters looking to hide behind real accounts to engage in abusive behaviors, like posting spam and scams. Many League of Legends accounts have been hacked and used to send spammy messages to random players with offers of free skins and Riot Points. The hacked account sends a link that, when clicked, prompts a player to input their username and password to receive the content; instead, the player’s information is phished, potentially opening up their account to be taken over, as well.

The popularity of Fortnite has painted targets on the backs of its players and compromised accounts are par for the course for its community. Hackers make fraudulent charges, often to the tune of hundreds of dollars; while it’s unclear whether poor password hygiene or phishing is to blame for the unauthorized access, some players are insisting they haven’t clicked any phishing links but have still been hacked. Stolen accounts are often sold and can bring in big money, especially if the player was high-level and/or had rare skins.

A compromised account in Final Fantasy XIV can leave players locked out of the game for days or weeks on end. Meanwhile, hackers use their character to spread spam and ruin their reputation, which often results in players being blacklisted by other players. Being hacked can leave a player feeling discouraged and frustrated and no longer interested in playing the game, which, in the case of FFXIV, is one less person paying Square Enix the monthly fee to play.

Abusive content is littered throughout games and fraudsters grow increasingly creative in how they implement their schemes into gameplay. Real Money Trade (RMT) for gil in FFXIV is a problem that has gotten so bad that Square Enix has implemented policies against it and will ban players engaging in it, as it throws off the game’s balance by creating inflationary effects on gil and is incredibly disruptive to gameplay, as seen here:

There’s also the risk of players buying gil from hackers who have stolen accounts and who may not even deliver the promised gil once they receive the player’s payment. 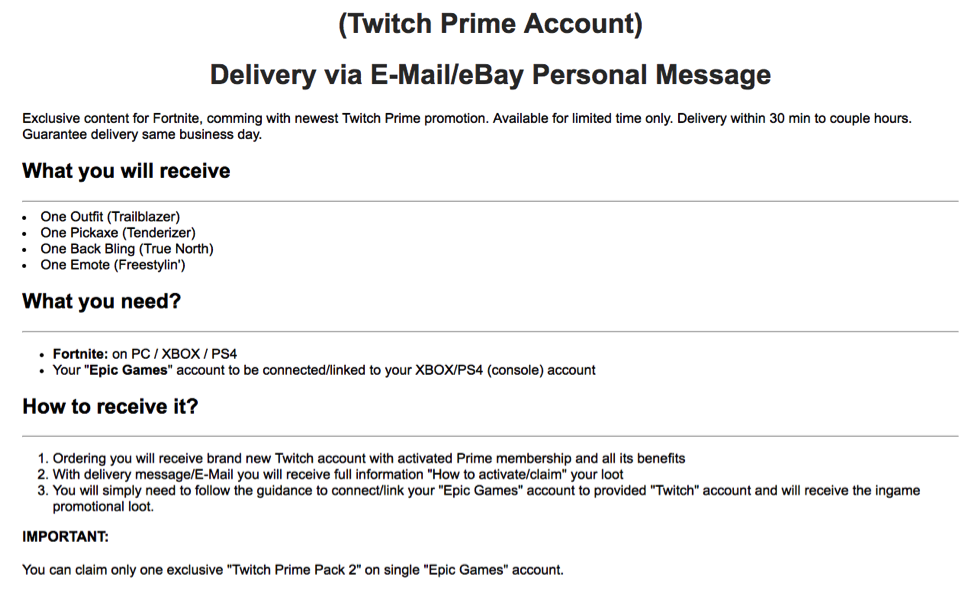 It’s unclear whether these accounts have been hacked or created by bots, or if there are just a lot of people with Prime accounts that don’t care about Fortnite, but Kotaku discovered just how easy it is to make throwaway, duplicate Twitch Prime accounts and exploit the platform for free skins. Twitch’s community guidelines forbid selling or sharing accounts, services, or features, but the market for this content continues to grow, and as fraudsters get more inventive instances of this type of abuse become more widespread.

Players should also keep an eye out for spam messages sent to their PSN inboxes. Unsolicited messages from random users (more than likely bots) have been going around, usually with a female name and no avatar, that contain only “hi” or “hey.” It’s likely that if the recipient were to engage in conversation with the bot or fraudster on the other end, they would eventually be sent a link to some sort of malicious content. Never engage with users you don’t know, and adjust your privacy settings to limit who can message you.

Can developers and gamers protect themselves against fraudsters?

Acting fast against fraud is key for both devs and gamers to limit exposure to risk. For gamers, when fraudulent activity is detected in their account, the difference between action and inaction could result in financial losses, being locked out of accounts they’ve poured hours into, or even identity theft.

For devs, their reputations are on the line. A toxic game environment plagued by scammers discourages legitimate users from playing, and if it takes days or weeks for a dev to rectify the issues, the playerbase will likely consider that action too little, too late. This can wind up lessening player faith in any future games a developer releases — because if they couldn’t stop one game from being hit with hackers, what will they do to protect their other games?

As gamers, flagging something when we see something fraudulent or suspicious is important; bringing attention to scams is beneficial for the safety of other players and alerts devs to fraud that needs to be stopped. Practicing good password hygiene makes it tougher for hackers to force their way into accounts, and devs can prevent players from using common passwords that are easily guessed. Devs must build strong fraud-fighting teams that react quickly to flagged content, but more importantly proactively work to prevent fraud before it happens.

Fraud in gaming is a pervasive issue, but gamers and devs aren’t powerless against it – working together to combat it can mean game over for fraudsters.

Angela Marrujo is a Content Marketing Associate at Sift Science. Angela is a lifelong gamer with a particular appreciation of Nintendo. Before Sift Science, Angela worked in PR in the video game industry.