The startup Fresvii is coming out of stealth today with a new platform dubbed AppSteroid that allows smartphone gamers to use voice chat with other players in mobile games. Fresvii is also announcing it has raised $1.8 million in funding from Japanese venture capital firm Nissay Capital. 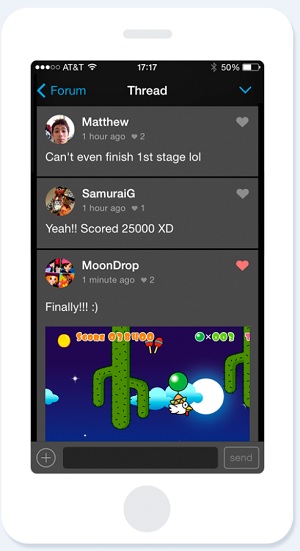 Redwood City, Calif.-based Fresvii is launching its open beta test for AppSteroid and its Chatter chat service, which game developers can use in their mobile titles.

Fresvii’s chat solution, dubbed Chatter (AppSteriod is its platform), enables players on iOS and Android devices to talk to each other while they’re playing games. It’s a lot like Skype, but it allows you to continue playing your game while you’re using the chat service, said Hiro Nakagawa, chief executive and founder of Fresvii, in an interview with GamesBeat. Fresvii is integrated into Unity Technologies’ game engine.

Nakagawa got the idea after he did some work for Nintendo. He created voice chat for the Nintendo DS, but he saw how hard it was to build a community with that system. He saw similar problems building community around voice chat with mobile games, so he started Fresvii in Japan in 2012. In January 2014, he moved the company to Redwood City in Silicon Valley. The challenge is that it isn’t easy to engineer all of the networking capabilities required to enable chat to happen at the same time as a game is playing.

Up to four players can use the voice chat at once over mobile data and Wi-Fi. Fresvii will have a free tier of the platform for developers. It will also charge them based on the amount of voice chat usage in their games.

“The challenge is in doing this without a lot of latency,” Nakagawa said. “We can do this at the same quality as Skype.”

Fresvii believes that Chatter will keep players more engaged in a game’s community. That makes the games stickier, and more likely to be monetized over time.

Fresvii is launching in both in the U.S. and in Japan, and that means a player in the U.S. can talk to a player in Japan. The service works in just about any social game, like first-person shooters or chess games. Rivals include Playfab and Kii, but Fresvii is unique in having a community-focused user interface with things like in-game text chat, group chat, matchmaking, and forums. Players can invite friends they already know or new friends to chat.

Besides Nissay, various angel investors have also put money into Fresvii. Fresvii has 10 employees. The company expects it will have games with the voice chat integrated within a few weeks.