Zynga is the most recognizable name in social gaming. Facebook members and iPhone owners alike have seen Zynga’s games continuously rise and fall from the top of the charts over the past few years, and with CastleVille’s launch earlier this month, it is unlikely that will change any time soon. The company is likely to go public soon and raise a ton of money, so we thought we would show this primer on Zynga’s social games so everyone can see what the fuss is all about. These simple, time-consuming titles have taken the  world by storm, bringing in hundreds of millions of users internationally since Zynga’s beginning in 2007. 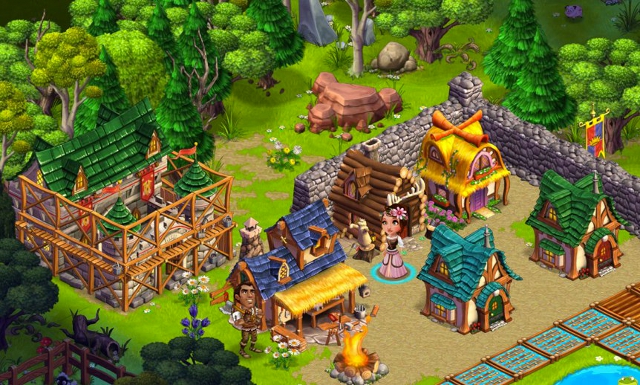 Let’s begin with the most recent, and fastest growing, Zynga game – CastleVille, released on November 14, 2011. CastleVille follows closely in the footsteps of the other graphical ‘Ville games, focusing on maintaining a kingdom while fighting off monsters called Beasties and exploring the overwhelming Gloom that has swept over the land. The only way to advance into the Gloom is by increasing your Castle Level, which requires actions such as building protective walls. As your character levels up, more buildings, tools and perks become available.

Given its medieval oeuvre, CastleVille feels a little more like an RPG than previous outings, which might draw in some of the social game detractors and those who have tired of the repetitive formula of Zynga’s recent games. CastleVille aims to be yet another resounding success for the prolific company, and as we have reported previously, this title has surpassed CityVille as the fastest growing launch for a Zynga game yet. As of Dec. 12,  CastleVille has 30 million monthly active users on Facebook, according to AppData. 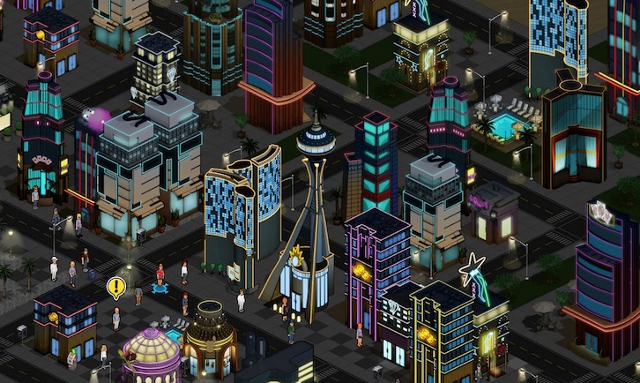 If any of the Zynga Facebook games warranted a sequel, it had to be Mafia Wars. Mafia Wars 2 launched on October 10th, and this follow-up to one of the most infamous of Zynga’s arsenal of games completely overhauls the text- and menu-based original to keep it in line with the current generation of graphics and combat-fueled ‘Ville games. Of course, the sentiment is the same: make money, expand your turf, earn street cred and don’t get shot (too much). The Bone Yard is a nice addition for those feeling the need to take out their aggression on tiny avatars of other players.

The recent Zynga games (like many of the older Zynga games) have a specific formula to them, which might be why a game about gangsters feels strikingly similar to a game about medieval kingdoms and another game about a burgeoning empire on a group of islands. Regardless, Mafia Wars 2 is still bringing in over 11.3 million users a month, hanging in there as one of Zynga’s 10 most played games on Facebook. 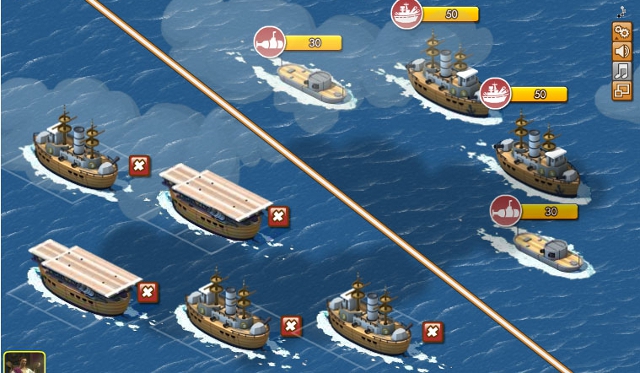 Empires & Allies is one of the first of the genre-specific Facebook games by Zynga, and was released on June 1 of this year. It follows in the footsteps of CityVille and FarmVille in terms of resource management, but the story and combat are reminiscent of real-time strategy games. Players must lead an army against the villainous Raven to regain the glory of their nation. You are initially given a small island in which to militarize and begin your siege on the enemy, but expansion is encouraged as more islands open up. It’s the first real Zynga game where combat is the core game mechanic. But the cartoon style is meant to appeal to more than hardcore gamers.

This military-centric ‘Ville also offers a relatively robust player vs. player option for those looking to show off their impressive armies. You can choose to invade other players’ islands in order to take over some of their production and gain extra cash. Empires & Allies maintains 18.2 million members, all of whom can’t help but continue the battle. 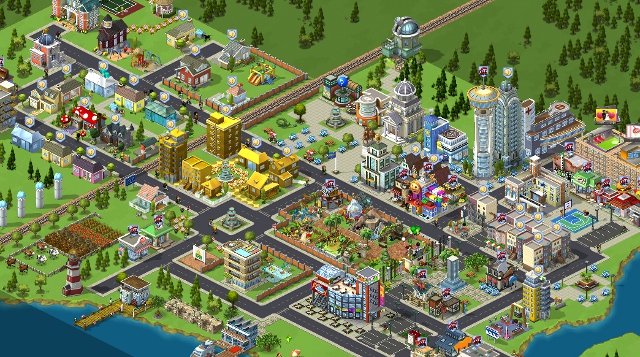 Happy birthday to Zynga’s CityVille. Released on Dec. 2, 2010, the title is Zynga’s most popular game, consistently bringing in the most users of any Facebook game. In CityVille, players start off with a small plot of land to populate with houses and farms, growing in level and collecting rent until they can expand their land and their city alike. As you can tell from the screen above, investment in CityVille certainly pays off visually, with sweeping skyscrapers and crowded streets covering the terrain.

This socialized SimCity might not have quite as many gameplay elements as Empires & Allies or CastleVille, but the scope of progression and the grandeur of the cities has clearly grasped millions of players and refuses to let go. Even a full year after its release, CityVille receives over 49.7 million players every month. In other words, this is the biggest Facebook game of all time, and that title won’t be wrested from CityVille’s hands easily. 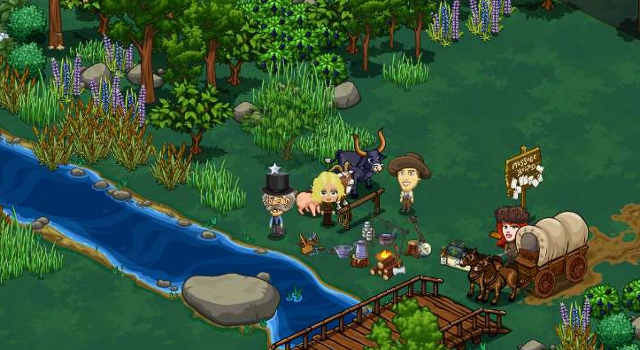 Another ‘Ville in the vein of FarmVille, FrontierVille, released on June 9, 2010, plops players in the midst of the Old West, tasked with fending for themselves among the wilderness. If you weren’t paying close enough attention, you might have mistaken this for FarmVille with a slightly anachronistic paint job, and you wouldn’t be too far off. Players farm, plant crops, raise animals, and basically complete FarmVille tasks in a new setting.

Lo and behold, over a year after its launch, Zynga decided to revamp FrontierVille with a new plot, new gameplay elements, and even a new name. The Pioneer Trail was born. This time, although the core FarmVille mechanics remain for those who prefer the Wild West to a modern farm, there is a fully fleshed out adventure players can embark on with three friends (NPCs or other players). This mode breaks the mold of Zynga’s other social games, with cutscenes, non-player characters, and even an ending, but it doesn’t stray too far from its roots in terms of actual gameplay. The Pioneer Trail is still inhabited by over 5.6 million monthly users. 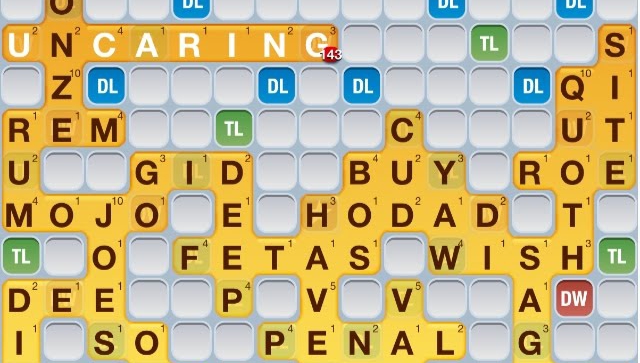 Possibly usurping the Wars and the ‘Villes as the most recognizable Zynga property, Words With Friends was not actually designed by the company. Newtoy, Inc. was bought by Zynga after the release of both Chess With Friends and Words With Friends, released in July 2009. But Words fits rather well here in the middle of rundown considering Zynga’s very first title, Zynga Poker. Zynga’s acquisition of the With Friends series complements their original poker title perfectly, even more so now that Zynga Casino is on the way.

Words With Friends is basically online Scrabble with fantastic Facebook integration and simple asynchronous gameplay. Players can start a game with a random opponent or with a friend, either by username or Facebook handle. The game can be played at whatever pace the players choose, and multiple games can be played at once. The game still brings in over 12.3 million users a month. Earlier this year, Zynga With Friends (formerly Newtoy, Inc.) released their third title Hanging With Friends, another iOS success. 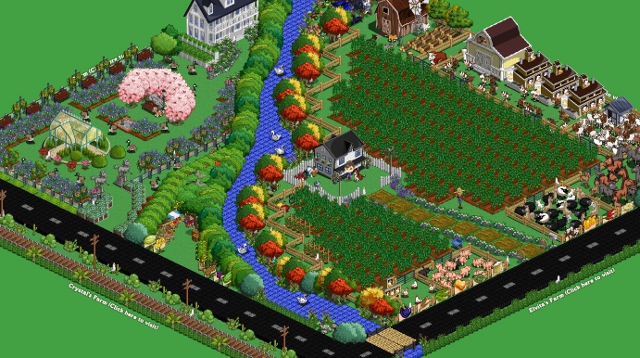 If FarmVille succeeded in anything (other than making gobs of cash), it helped break down the wall between gamers and non-gamers. Nearly everyone with a Facebook account planted some corn and raised a few chickens since FarmVille’s release on June 19, 2009, regardless of gender or age. Plus, the basic farming mechanics of FarmVille have appeared in several of the more recent Zynga games, further proving the basic formula’s longevity. FarmVille was Zynga’s first break0ut hit.

FarmVille might be the most simplistic of the ‘Villes. Players own a small farm in which they must plant crops, raise animals…and that’s pretty much it. As players complete these tasks, their level increases and more animals and crops become available to purchase. If you have any neighbors, you can visit their farms and help fertilize their crops and harvest the milk from their cows. Incredibly, FarmVille still rakes in a crowd of over 30 million farmers a month, right behind its graphically superior successor, CityVille. FarmVille recently passed up The Sims Social to become the second-largest game on Facebook again.

The father of the ‘Villes, YoVille, launched in May 2008, took a page from The Sims’ book and gave us a home to decorate and reside in, along with a static town to explore. This is yet another of Zynga’s purchases, one that later spurred them to continue the top-down, avatar creation, social games such as FarmVille and CityVille. YoVille is much simpler than Zynga’s successive games, mainly focusing on being social with other players’ avatars rather than reaching certain goals.

With all the new properties Zynga has introduced over the past few years, YoVille shows its age. The graphics and lack of any real gameplay might turn off new players, but the game still brings in over 2 million users a month, quite an impressive feat for a game as old as this. 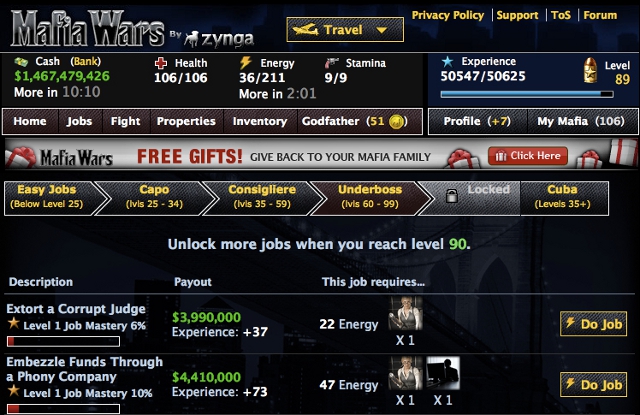 Mafia Wars is the social game that started it all. No Facebook user has managed to escape at least one or two requests to join the Mafia since this game’s launch in early 2008. Mafia Wars, unlike most of Zynga’s more recent titles, including Mafia Wars 2, is a browser based game as opposed to a graphics based one. Players have a limited amount of rechargeable health, stamina, and energy with which to complete tasks and fight other players. Fighting stats are another factor determining which player is more likely to win in a fight.

Throughout its lifetime, Mafia Wars has increased in size by adding cities, which serve as expansion packs of sorts. Some of these cities have remained a permanent part of the game, but others, such as Moscow and Bangkok, were only around for a limited time. The original Mafia Wars, despite the introduction of its sequel, still has over 3.2 million users a month.

Of course, before Zynga invaded our social networks and mobile phones with farms, mafias, cities and castles, there was Zynga Poker, launched in July 2007. To this day, it remains one of the most played Zynga apps, with almost 29.6 million users every month. This is one of the most popular online poker games of all time. It functions like most other Texas Hold ‘Em games, but as with most of Zynga’s titles, players have the ability to level up. Leaderboards allow friends to compete for better rankings and everyone has the option to send gifts to their friends as well.

The game is available in a multitude of languages across nearly every platform imaginable, and it was recently announced that Zynga Poker would become part of a bigger Zynga franchise: Zynga Casino. All we know for now is that Zynga Poker and Zynga Bingo will be included in this package.

Zynga is a dominating force in today’s social gaming market. Despite the controversy and the shrinking profits, no one can deny the effect Zynga has had on gamers and (previously) non-gamers alike. These might be 10 of the most recognizable Zynga titles, but here are some of the others which still garner millions and millions of fans every month, including Zynga’s latest mobile titles: