It was a traditional boy-meets-girl, girl-rejects-boy story that ended in the two of them getting married. But along the way, Kris quit that executive job, becoming an indie developer at home in 2013.

His dream becomes a reality today with the launch of A Druid’s Duel, the $10 whimsical fantasy strategy game for Windows, Mac, and Linux. It’s the first from Kris’ company, Thought Shelter. It’s also the result of years of saving and strategy and compromises the couple made — and still make — on a daily basis.

Now the pair can only wait and see: Depending on how the game does, Kris will either continue to create games or go back to the world of traditional employment. It’s a story familiar to independent developers across the country — and especially to their families.

The game that carries Kris and Jessica’s hopes: A Druid’s Duel.

“I was taking a tour at work. It was my first day,” Kris remembers. “It was not that big of a place. There were only maybe 30 people, so you meet everybody. I remember specifically that she did not seem interested.”

It was almost three years later before he got the nerve up to ask her on a date.

“I asked her out … kind of,” he said. “It was very casual. She turned me down, for about a day. But then we went out and got a beer after work a couple days later.”

“He said, ‘If [you don’t want to go], that’s cool, we can be awkward about it on Monday,'” Jessica remembers, chuckling. She was feeling down after a house she wanted to buy fell through, and he suckered her in with the beer.

That was a few years ago. How many is a bit difficult to pin down: a couple years, Kris thinks. Two and a half, Jessica suggests. No, three or three and a half. No, it’s been six, Kris says. “No. Nuh uh. Maybe a little over five?” Jessica replies. 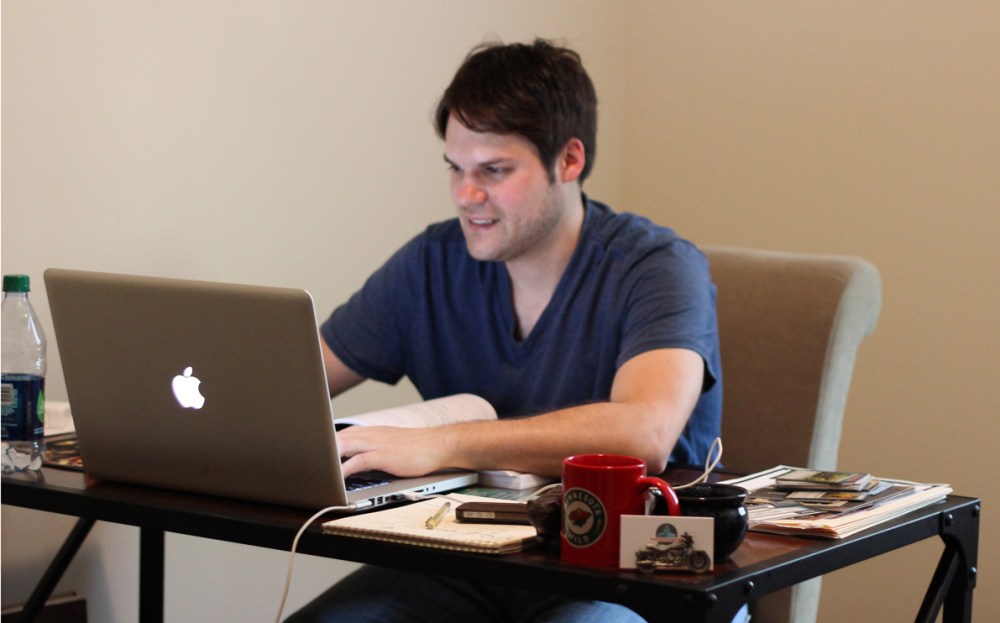 Above: Kris Szafranski on his first day of work: white walls, laptop, and tons of optimism.

What they do know is that they’d been living together for about 18 months before Kris finally took the plunge he’d been talking about, leaving the development firm on amicable terms to start Thought Shelter in May 2013.

“The idea for Druid’s Duel has been around for a long time, like a lot of people’s first games,” Kris said. “I was kind of at a place financially, and with experience … I knew how business worked. I had an opportunity, if I were going to try something like this, this would be the time to try it.

“I had never been in a company as long as I’d been there: 7 years. I like to try new things. Opportunities for smaller games — they’re much more prevalent. So after a lot of planning and saving and thinking and talking about it – [“and worrying,” Jessica adds] – and worrying, I decided to give it a shot.”

Kris has a single tattoo, he said: a Chinese character that means “leap, and the net will appear.”

“I have always read that as faith in yourself, to try things,” he said. “It’s the only thing that I’ve had permanently embedded in me, so it’s important.”

For Jessica, the jump was jarring, though she did her best to understand and support it.

“That’s something I don’t see myself ever doing,” Jessica said. “It was kind of difficult for me to really put myself in his shoes. But I know that taking risks like that is what keeps him alive.

“I had to step out of my own little world to try to understand it. It was super exciting, and I’m super proud of him for even being able to take that first step.”

She was worried about what would happen, she said, but she wasn’t about to stop him.

“I was on board,” Jessica said. “I had to talk myself into it. I knew that he wouldn’t fizzle out on the project and then become a professional TV watcher. I trust him. He’s a hard worker.”

The couple gets married and Kris gets to work 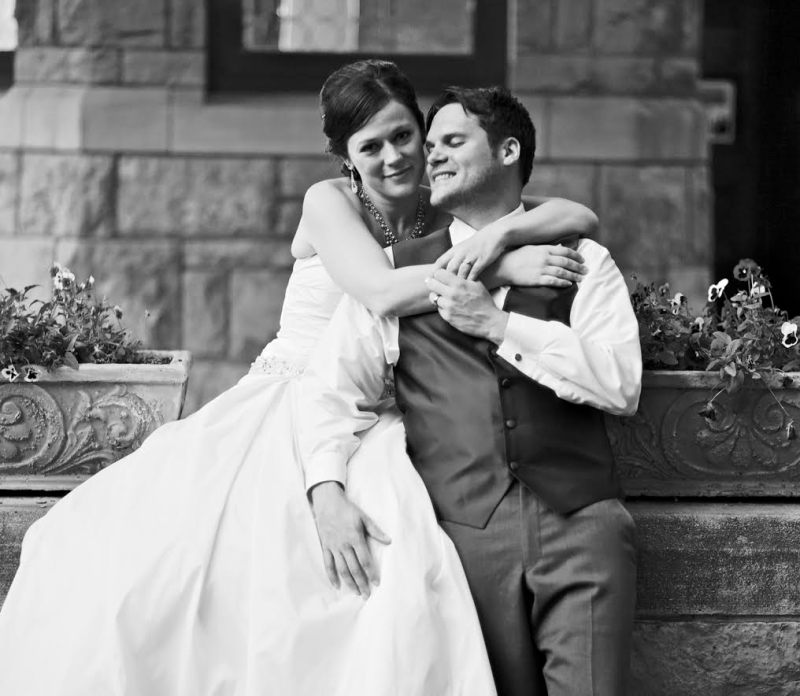 Above: Jessica and Kris Szafranski at their wedding.

Kris gave two months of notice at his software company, starting to work on developing on the weekends. When it came time in May, he moved into a guest/storage room at the house they shared together — Jessica’s house, the one she had bought after the other had fallen through, the one they thought they might upgrade from (that was no longer an option).

That first day, he sat in the mostly empty room with his brand-new business cards and “just got to it,” he said. He had been planning and prototyping for a while, so he had something to build on. But suddenly, bills were more of a worry than they had been, and the pressure was on.

“We agreed to check-in points,” he said. “If I’m finding myself not getting anywhere for two weeks straight, then it would be my commitment to go get a job or reevaluate.”

Still, the change didn’t prevent Kris from proposing to Jessica on a trip to Italy that summer. Only after they deliberated for a bit did they decide they could still go. 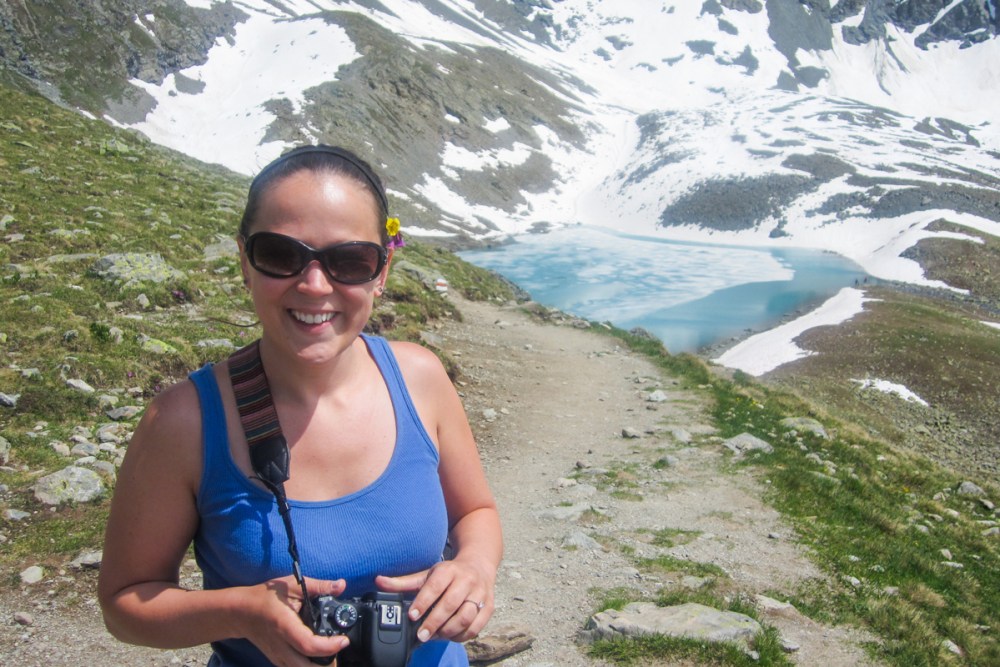 Above: Jessica Szafranski near where Kris proposed.

“We had planned the trip before he left,” Jessica said. “One of the first things I asked was, ‘We still get to go to Europe, right?’ ”

The Alps had been on Kris’ bucket list. In the middle of the trip, on the green summer slopes of St. Moritz in Switzerland, he pulled the ring he’d been carrying around secretly for a week-and-a-half waiting for the right time, and he proposed to her next to a tiny glacial lake.

“I kind of thought it was a for sure thing. That would have been an awkward rest of the trip,” he said, laughing.

But fortunately things went happily, and the couple settled into a routine when they returned, with Jessica going to work at the office and Kris tackling his hours at home. Then, just three months later, Jessica was laid off.

“It was kind of nerve-wracking when I lost my job and we realized we had a zero-income household. No worries there,” she said, laughing wryly. “It’s a little nerve-wracking, but both of us have always been really, really responsible with money. Kris had been squirreling away a few bucks over the years for this. [“Or something like it,” Kris said.]

“Thankfully, Kris was not the kind to slip into lazy land and not finish this. I wasn’t going to have to kick him off the couch and go get a job.”