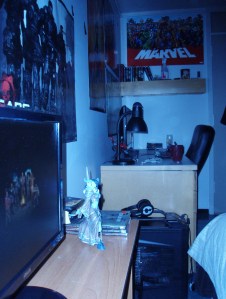 You wake up, move to your computer, and launch Steam. This has become your routine. This is “normal” to you. Are you addicted to video games or are you simply part of a growing, culturally accepted phenomenon?

With each passing year, we witness a growing number of news stories that chronicle the misadventures of online gaming addicts. These new media dependents participate in video game over-use and obsession, most of them suffering in some form or another. From neglected children to community-assisted suicide, each report becomes more and more farcical. I’m a gamer and so are many of my friends — but how many of us can the media consider addicted, and is addiction such a bad thing? Let’s find out!

The disappearance and death of Brandon Crisp, a 15 year old who left his Barrie, Ontario home after his Xbox 360 was taken from him, fueled nation-wide concern toward video game addiction and obsession here in Canada. Parents across the country grew fearful that their own children were as dangerously enraptured as Brandon with computer and console games. While members of parliament scattered to pass bills in an attempt to assuage these fears, the psychology behind video game addiction remains embryonic.

In an interview in 2005, Dr. Maressa Orzack of McLean Hospital in Belmont, Massachusetts estimated that 40% of the 10 million (now 12 million) players of World of Warcraft are addicts, a figure she obtained from a survey conducted by the “Daedalus Project.” Dr. Brody, head of the media committee at the American Academy of Child and Adolescent Psychiatry, put forth his belief that online gaming addiction stems from a predilection to or affliction from other psychological problems including anti-social personality disorder, depression, social anxiety disorder and other phobias. This notion concludes that online gaming addiction will, most likely, only affect individuals who possess a predisposition to it.

According to Dr. Orzack’s estimations, 40% of WoW players suffer from social disorders — but that’s crazy, right? Considering she came under widespread criticism from her peers, there probably is little weight to her claims. This seems to be the fate associated with doctors who claim the ubiquity of online gaming addiction. While most gamers enjoy video games in a healthy and safe manner, the industry comes under constant fire as the severity and preposterousness of stories increases.

With the 2008 introduction of Blizzard’s newest WoW expansion, Wrath of the Lich King, there have been 10 documented deaths up until this point. While all of these deaths, save for that of a baby whose negligent father was too busy playing to feed him, were unique to irresponsible gamers, the press has done its fair part in inflating and exaggerating the danger of these games.

When I suggest giving World of Warcraft a shot, my close friends often reply, “But I don’t want to get addicted.”  This reaction, in fact this entire phenomenon, is the result of misinformation. Video games possess no documented addictive properties whatsoever. In fact, you’re more likely to become addicted to chocolate than to video games, due to its chemically enticing elements.

Some countries (including Canada, South Korea, China, the Netherlands, and the United States) have responded to the observed threat of video games by opening specialized medical institutions. These facilities do their best to acclimate victims of addiction to conventionally accepted social activity. The strategies which they employ, however, are not vastly different from those applied to alcoholics, debtors, or over-eaters. In this sense, the psychopharmacology and therapy of video game addicts is not unique. It looks like these detox clinics are just a desperate attempt at assuaging the fears of parents and voters.

When I used to lead my Counter Strike: Source clan, I would log six hours in-game. Think that’s impressive? I used to be the main tank of a well-regarded WoW guild. My responsibilities demanded that I be online atleast seven to eight hours a day! In my life, the word “addiction” has often quite adequately described my relationship with video games.  Did I need to go to a medical facility? No. Did the game possess priority over work, school, and family? No way. Did I ruin my life? Not in the slightest.

Video games are fun, and it’s illogical to assume that everyone will be responsible with their gaming habits. Some of us enjoy a few hours of casual play per week while others insist on spending the night in front of a screen. At the end of the day, most of us depend on games for a sense of satisfaction, self-fulfillment, or mere entertainment. Some people become addicts — but that’s not necessarily terrible.

You may not agree with me, but I believe that this notion of “kids vegetating in front of T.V. screens en masse” is outrageous. A generational gap could be the force which promotes this misunderstanding. Hopefully, a bit of time can remove these media-endorsed fallacies from the public mentality.  Until then, I hope to see you all in the Icecrown Citadel. I can’t kill Sindragosa by myself!