Jez San has been a pioneer in games, online gambling, and crytocurrency. And his latest startup, FunFair, allows him to combine all of those passions at once.

San believes the future of games and online gambling lies in Ethereum, a cryptocurrency that distributes itself across many computers in what is called a blockchain. Similar to Bitcoin, Ethereum has become a hot platform for secure and transparent trading. But Ethereum is different from Bitcoin because you can build software programs (dubbed Smart Contracts) on top of it, and San’s new company uses Smart Contracts to build online casino games on top of Ethereum.

San has raised $26 million via an initial coin offering (ICO), as pre-sale event for the Singapore-based company. He was able to do that in part because of his rich history in tech and games, where he has been immersed since the 1970s. He founded Argonaut Games (1982-2006), an early video game company that started with games for the Commodore 64 and Amiga and then moved on to making titles like Star Fox and Malice. In 2002, San received the honor of officer of the Order of the British Empire for his contributions to computer games.

He has also had a career in online gambling. A decade ago, he founded PKR.com, a real-money gambling online poker game room with 3D avatars. He started that in 2004 and he left in 2006. The audience grew to more than 5 million users, and San tried to keep investing in the company. But online poker became an increasingly tough business and PKR.com finally shut down in May.

But San believes FunFair has a shot to provide a platform for Ethereum casino games for companies with gambling licenses. Programs that run on Ethereum’s Smart Contracts can be slow, but FunFair has architected a platform for fast games. Those games can use Ethereum’s transparent random number generators to create fair games. And since the blockchain ensures secure and transparent trading, players don’t have to put down big deposits to ensure they will pay. The transaction fees can be smaller, and that removes a lot of the friction from playing real-money online gambling games, San said.

San announced the platform this week, and games using it could be out sometime this year. He runs FunFair (with offices in London and Singapore) with cofounders Jeremy Longley and Oliver Hopton. I interviewed San about his plans and got him to explain Ethereum and blockchain in simple terms that even I could understand. 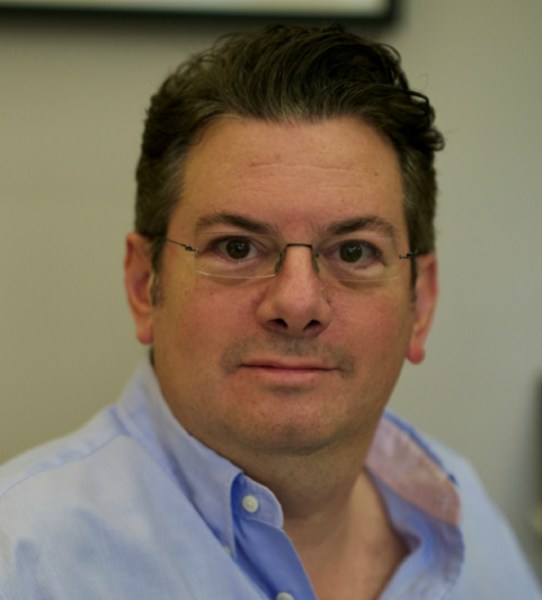 Above: Jez San is cofounder and CEO of FunFair, a maker of Ethereum-based casino games.

GamesBeat: Where are you based these days? Are you still in the U.K.?

Jez San: Still in London, yeah. The office is in Camden. I’m at a gaming conference in Amsterdam now, and then in a couple of days’ time I’m at a blockchain conference in Barcelona, and then I’ll be in Vegas at the big gaming convention, G2E. There’s a lot of travel involved.

GamesBeat: I was interested in this combination of online gaming and blockchain. I don’t always tune into this market. Only every so often do I get into the gambling side of things. But this seems like an interesting intersection that’s happened. I’ve watched a lot of the excitement over Ethereum and the like. I was hoping to ask you about the big picture, as well as the particulars of what you’re doing.

San: It was inevitable for me to get into the mix of blockchain and gaming, because I’ve been working around both of those things for a long time. What we’ve done is we’ve solved some of the problems with how to do casino games on the blockchain. The company is called FunFair. We’ve built a technology that lets us do a lot of stuff in real time. It lives above the blockchain. We call it fate channels. It’s a form of lightning network that lets us offload some of the work the blockchain would normally do and do it ourselves directly, fast, and then push the result to the blockchain.

What that lets us do is real time rapid numbers and micropayments, so we can do bets and wins and things like that, and also player interaction. We can do all of those things super fast, which means we can build the kind of fun interactive games that people want, instead of the ones that are currently on offer. The benefit of all this technology is, first, significantly lower cost. The casino operators that license this technology don’t need any servers. Usually one of their biggest costs is the server infrastructure, an enormous number of servers living on a remote island somewhere that run the games. With the technology we’ve invented, the blockchain is our servers. We run all the casino games inside smart contracts on the Ethereum blockchain.

GamesBeat: Can you explain that in more detail?

San: The difference between this and the Bitcoin blockchain—what that’s built to do is move money around. They can send money from A to B and the cryptography decides who is allowed to send it and where it went. What Ethereum has done that’s new is they actually let you run programs on the blockchain, quite sophisticated programs. They use a language called Solidity, but it’s very similar to Javascript. You can write entire programs that live on the blockchain.

To date people haven’t done anything that sophisticated with this. They’re doing exchanges and trades, things like that, but they haven’t done games. What we’ve built are four casino games. All of the program logic lives inside these programs that they call smart contracts. Because they live on the blockchain, they’re completely transparent. The way they execute, the inputs and outputs, everything is transparent and recorded on the blockchain.

We still have a pretty graphical 3D frontend that the player sees. When the player plays a game in their browser, it’s in part playing locally on their computer or other device, but it’s mainly playing on the blockchain. The benefit of that, as I said, is we don’t need any servers, because the blockchain becomes the server, and second, everything is more fair than it’s ever been before.

To give you an example, most of the existing casinos online require the player to put a deposit into the casino. Usually they use a credit card, or Bitcoin in some cases, and they make a deposit that they have to leave in the casino. All of the games you play from then on are playing from the casino’s wallet, which you’ve left your money in. That puts a lot of risk on the player. They have to ask for their money back when they want it. They might not get it quickly. In rare cases the casino can run off with it.

In our version of this technology, because the games are running on the blockchain in these little smart contract programs, players can play directly from their own wallets. They don’t make a deposit. The player can never lose their main fund. They’re only risking whatever they’re putting on the game at that moment. It’s much safer for the player.

Because the games are played entirely in smart contracts, they are completely fair. Everything they do, from the random number generation on forward, is transparent on the blockchain. Not only can they see that they weren’t cheated, but they can see everyone else’s games and see what the games are doing in the long term. They can see that people are getting exactly what is claimed. It makes these games transparent and fair for the first time.