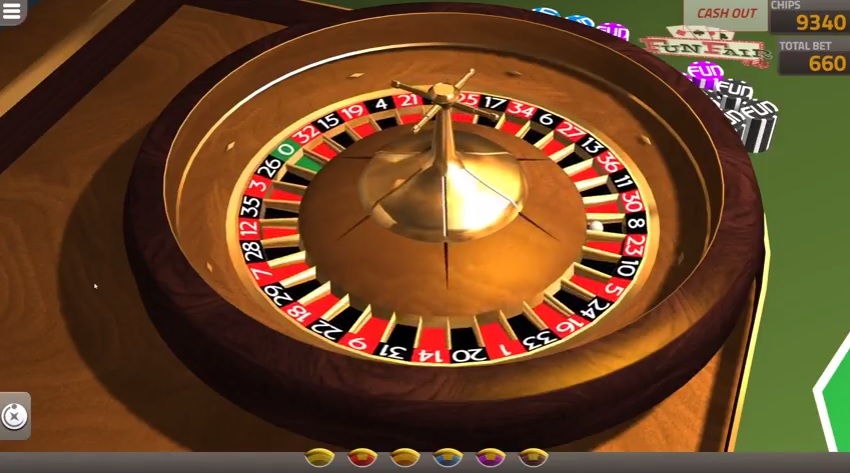 Above: FunFair has created a blockchain roulette game.

GamesBeat: When you say that it’s played on the blockchain, it’s utilizing all of the server resource that’s being dedicated around the world to the blockchain? It’s almost like tapping collective computing power.

San: You don’t actually need a lot of computing power to do the server side of casino games. They’re not protein folding or anything like that. What they do need is picking random numbers, deciding if the player won or not, and paying the player. The logic is pretty straightforward. It’s different for each game, but roulette would just be picking what number it lands on. In a slot machine it’s the position of five reels. Then you look at those numbers and decide if the player should have won. The logic is done in the smart contracts, so people can see that you can’t cheat. They can see the input and the output. If they should have won, they would have won, and the payment would have gone straight back to their wallet.

One aspect that makes it very special, that’s a unique solution to this—everything I just described would have been possible for someone else, but we designed the fate channel technology so this can run in real time. The games are fast, and when they’re fast, they’re fun. People can interact with the games at the speed they want. In the past, people who have tried to solve this problem haven’t been able to run the games quickly, and so the games are so slow that they aren’t any fun. Fun is obviously a prerequisite.

GamesBeat: How many players can play at once, or play at the same table?

San: Our technology doesn’t have a scale problem. We can have as many as we can find. The traditional way of implementing this, without the fate channel technology, would have been very slow and wouldn’t have been able to cope with capacity. It might have only managed 10 people playing at the same time. Our technology has no limit to the number of people who can play simultaneously. We’ve taken most of the load off the blockchain, but we keep the blockchain for starting and finishing the game session. Then we do the rest of the game through our own proprietary means.

GamesBeat: How early did you have to get started on this?

San: We’ve been working on the whole project for about a year, but it really came together in the last six months, when we made real progress. We’re now very ahead of our peers. We’re the only people who have solved this problem, making it what we call, “fun, fast, and fair.” That combination of things, so far, has eluded most people.

GamesBeat: Did you anticipate this big valuation for Ethereum?

San: It’s been very exciting to watch as it’s gone crazy. When we started the project, Ethereum wasn’t at the value at it is now. The thing that’s driving the value of Ethereum is partly the fact that you can build applications, which is what we’re doing, and partly this ICO market of ventures being able to raise funds through the Ethereum network. Those combine together to drive the valuation of Ethereum. We’ve benefited from being able to crowdfund from that platform. But equally we’re reliant on the Ethereum platform, because it’s the only one that can do smart contracts right now.

That proves that they’re valuable. The people who believe Bitcoin is the only solution possible—Bitcoin doesn’t have smart contracts, or not yet anyway. For a long time the Bitcoin people were saying that smart contracts have no value, but the reality is that they have enormous value when you try to build our applications, because you can’t do what we’re doing on Bitcoin.

GamesBeat: How many people are working on this for FunFair?

San: Right now the team is 20 people. 10 of them are in development, and the other 10 are in PR, marketing, and other things. But we’re rapidly expanding now that we’ve finished the first stage. We’ve moved to a bigger office and we’re hiring to build the team out and get a lot more done.

San: The technology we’re building could apply for almost any kind of game, especially any games that require randomness or payments. Any game that needs micropayments would benefit from the technology. So yes, it has applications outside of what we’re doing. But initially we’re focused on the casino game market. We’ve built prototypes of three different slot machines and three or four table games – blackjack, baccarat, roulette. Those are live on our site right now and you can see what we’re working on. They’re not finished yet, but they look pretty good, even as prototypes.

This is a platform, so the games we’re building are really just to demonstrate what is possible. The next phase of the project is to encourage other game developers and suppliers to build their games on our platform. The launch games we’re doing is showing off what the platform can do, and then we let everyone else in on it. 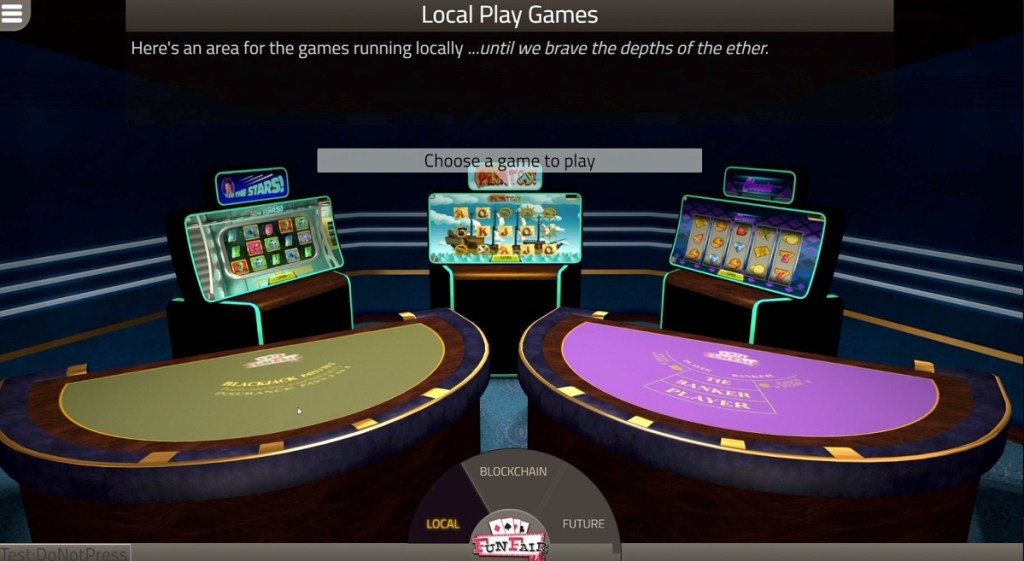 Above: FunFair’s games use the ability to create programs in Ethereum’s Simple Contracts.

GamesBeat: What’s the easy way to explain Ethereum or blockchain to people?

San: The way to explain blockchain is that using math and cryptography, you can prove who owns what money and send it reliably without anyone else involved – without a bank, without a credit card company, without Paypal. The way it works is with a ledger. The blockchain is a ledger that contains a list of who owns what. When you want to move 10 Bitcoins from Dean to Jez, you’re not really moving anything. You’re just changing an entry in the ledger as to who owns them. That way they can move from anywhere in the world to anywhere else in minutes.

That’s what Bitcoin did, which was groundbreaking, because no one had been able to move money around without having intermediaries do it for them. This was the first time you could do it yourself. The innovation of Ethereum is that instead of just being a fixed function – moving money from A to B – Ethereum made it possible to run programs that do a lot more than move assets around. Ethereum is effectively powering any number of applications.

GamesBeat: I’ve come across this with the Neverdie folks. Jon Jacobs is designing tokens that let you have the ability to take your avatar around to different games, or to revive your character when you die, things like that.

San: That’s their angle, yeah. There are so many applications possible once you can create your own tokens that are specific to each product. You can design an economy around them. And yes, they can interchange. They have a standard for how to create these tokens, and the exchanges can swap one for another one at whatever the exchange rate is. The economy becomes larger than any individual token. It’s not a one-to-one cost, because they all have floating exchange rates based on supply and demand. But it means that building applications on top of the Ethereum platform, you get access to all the rest of the Ethereum ecosystem as well. The whole is greater than the sum of the parts.